Five years ago, I wrote an article that contained 10 observations from training women HERE, and six months ago I jotted down 10 tips HERE. Today, I’m providing 12 more observations that I’ve gleaned from training mostly women. Keep in mind that many of my female clientele are bikini competitors or newbies; as of yet I haven’t sought advanced powerlifters or athletes for long-term clients. If I did, my experiences would surely be different, but nevertheless my clientele have provided me with interesting and unique anecdotal experiences. There are many things little nuances associated with personal training that you won’t find in textbooks or certification courses, so these types of blogposts are valuable and important.

Around half of my clients are stronger with box squats than they are with free squats to the same depth. The box seems to help them better organize themselves for propulsion during the concentric phase. Box squats lend themselves to crazy-high levels of rate of force development (RFD), as seen HERE. I have not ascertained what factors contribute to one being stronger at box squats versus free squats. I think it’s a good idea to alternate between the two styles throughout the year. You have a “squat to a box,” where you just tap the box and use it as a depth gauge, you have a “rocking box squat” where you rock all the way back and then lean forward and rise, and you have the style I prefer, which involves a slight rock characterized by a relaxing of the hip muscles but not the erectors and a forceful explosion off the box. 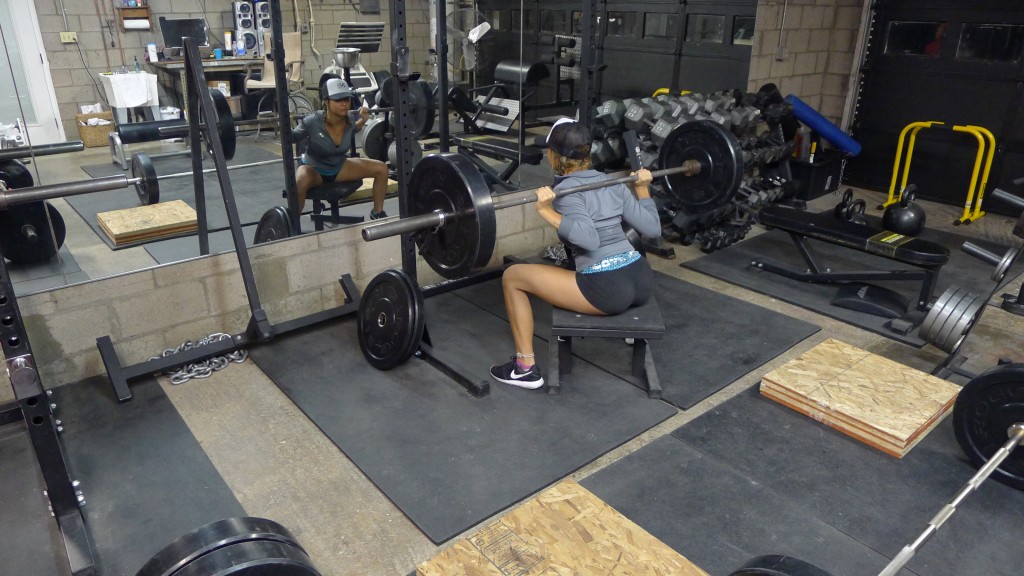 Trap bar deadlifts (TBDLs) are a strength coach’s dream exercise (see HERE and HERE). Unfortunately, around a third of my female clients don’t tolerate them well. They feel that the handles are too wide which creates some jarring on their joints and makes them feel a bit unstable. They wish that there was a trap bar with narrower handles to better fit their bodies. With these clients, I omit prescribing TBDLs.

I’ve spent more time thinking about knee valgus than I care to admit – seriously hours upon hours pondering all the different possible culprits and contributors (see HERE and HERE for thoughts). I believe that beginners knee cave due to a broader list of reasons than advanced lifters.

In my experience, women have a harder time preventing knee valgus than men. I think every woman I train struggles with keeping their knees out with squatting when maxing out or approaching failure with submaximal loads.

I’ve started wondering if this is simply due to a combination of anatomy (femur shape, tibia shape, etc.) and the effects of muscular contraction on anatomy (quad and hamstring contraction pulling the knees inward). In other words, medial knee displacement might just be normal biomechanics for many women when they squat. Counteracting this knee caving almost requires overly accentuated gluteal/hip external rotator contractions which works fine with submaximal loads but won’t overpower what the knees want to do with maximal loads.

Many of these ladies can knee cave year in and year out just fine as long as they limit the amount and frequency of the knee caving (similar to slight rounding during deadlifting). They experience no knee pain and their performance steadily improves. I wonder if we (strength coaches, personal trainers, physical therapists) are overly focused on “correcting” knee valgus when it could be a normal variance due to anatomy – similar to foot flare and stance width in concordance with varying hip anatomy.

For this reason, I’m strict with coaching anti-knee caving (knees out) with submaximal lifts but I allow for some wiggle room when going for a PR.

The individuals with the biggest quads seem to deadlift with slightly lower hips and better arches in their spines, whereas those with smaller quads tend to pull with higher hips and sometimes greater spinal rounding. Therefore, taller and more slender women will typically pull with higher hips than shorter and stockier women. I’ve found that many bikini competitors and models almost look like they’re performing stiff leg deadlifts (SLDLs), and getting them to drop their hips requires lighter loads to be utilized. This applies to probably two thirds of my clients. For these individuals, I just let them pull with higher hips as long as they keep their spines relatively neutral. I’m happy to hit their quads with squats and lunges and let them use more hammy to deadlift. 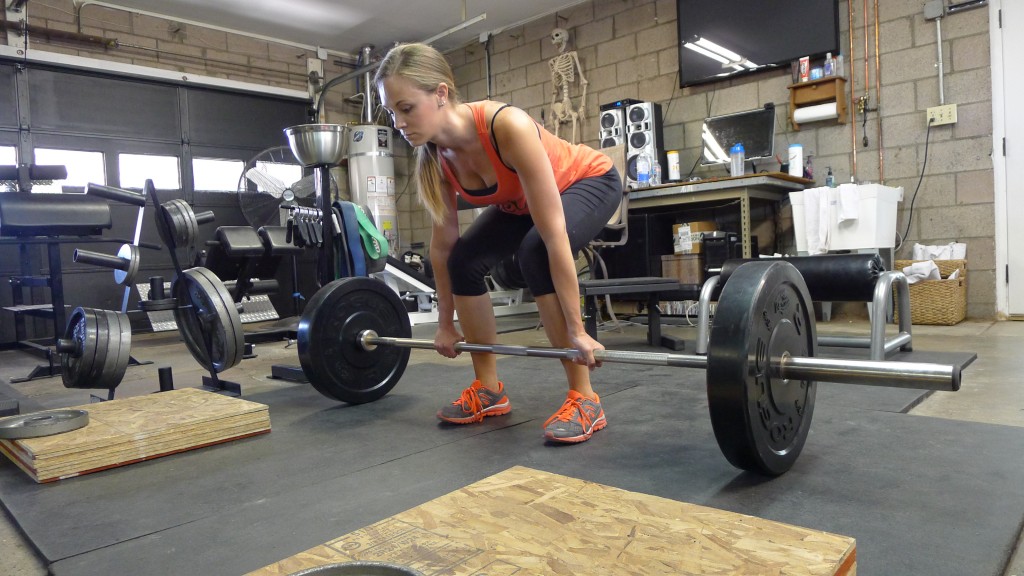 I would guess that eight out of ten women feel lateral band work hitting their glutes (especially upper glutes) well during various sumo walks, monster walks, banded clams, and band seated hip abductions. However, one in ten feels them working the hell out of their glutes, feeling very high levels of activation on every repetition, and another one in ten doesn’t feel them working their glutes at all. It’s not that they’re performing them wrong; it’s probably a natural variation in anatomy. My hypothesis is built on anecdotes involving client feedback, palpation, and EMG, so I’m pretty confident about this observation. For clients who feel lateral band work very well in their glutes, I up the volume, and for clients who don’t feel them working their glutes, I omit them. 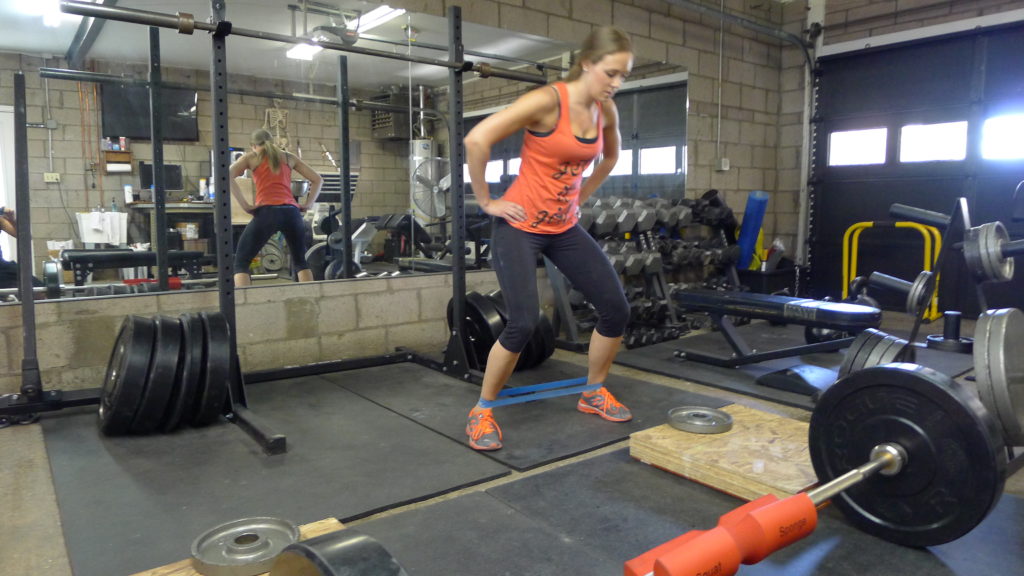 Most women can eventually work up to being able to perform one or more unassisted bodyweight chin ups. However, I estimate that around 1 in 10 women will never be able to perform a chin up no matter how hard they try, due to a combination of poor leverages for chins, inability to grow ample upper body muscle mass, and skewed body proportions involving greater lower : upper body mass ratios.

This applies to both men and women, but it might be even more pronounced with women. Teaching deadlifting with a kettlebell is one of the easiest things in personal training. You just have them stand over the bell, drop down and grab a hold of it, adjust hip position, pull chest up and make sure spine is neutral, then pick it up. Everything stays tight and rises upward at the proper rates. However, with the barbell, they’ll typically set up perfectly, but upon lifting the bar, energy leaks occur – hips shoot up, spine rounds a bit, bar drifts away from the body, etc. Unfortunately there are very few gyms that have heavy kettlebells (I have 106 lb and 203 lbs, but I wish I had 124 lb, 150 lb, and 176 lb kbs as well), otherwise more personal trainers could take advantage of teaching the deadlift pattern this way. However, when transitioning from kettlebell to barbell deadlifts, there’s still a learning process required, so there’s no avoiding the barbell if you want to build the strongest client possible. 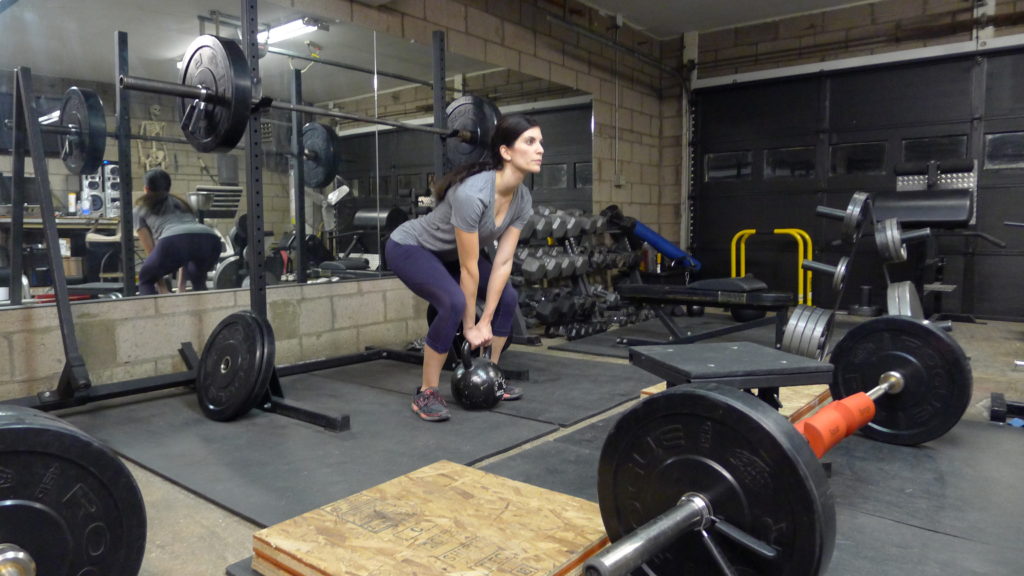 Initially, most women find front squats to be very painful on the shoulders. Over time, the pain tends to diminish and most of these women can eventually front squat pain-free. However, probably a third of women don’t seem to adjust and their bodies always elicit the pain response, so they’ll never be able to front squat heavy without wincing in pain. Since pain inhibits muscle activation, I just pick a different alternative for these clients, such as goblet squats or high bar back squats with heels elevated onto plates.

Many lifters and personal trainers won’t have a ton of experience with band hip thrusts if they don’t have a Hip Thruster, but it always makes me chuckle when I see it happen. When approaching failure during band hip thrusts, around 1 out of 3 women will start doing some crazy things with their arms – they won’t be symmetrical, one wrist will flex and the other will hyperextend, and it just looks really un-athletic. For this reason, I began to recommend that women dig their arms into the bench and make fists – it can enhance performance through irradiation, plus it doesn’t look silly in case I post on Instagram or YouTube. 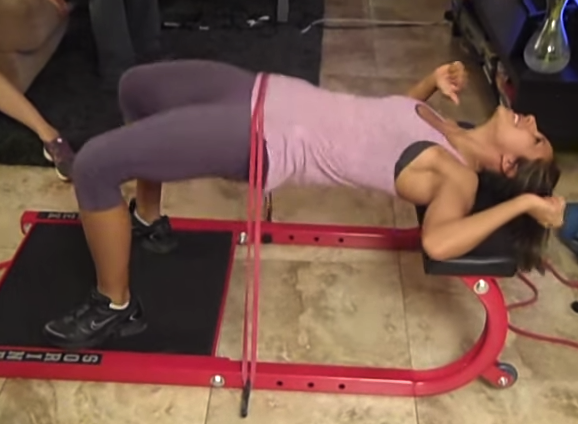 This tip applies to both men and women as well, but it’s even more pronounced with women. With all pressing movements, most women will naturally want to flare their elbows out as much as possible. This occurs with push ups, bench press, and military press. It obviously happens because they’re initially stronger this way, but nevertheless it’s important to get a bit more tuck with pressing movements. Elsbeth Vaino and I wrote about this four years ago HERE. Getting the arms at a 45 degree angle relative to the torso is a good rule of thumb for push-ups and bench pressing, but it will change depending on the anatomy of the individual. As loads get heavier or reps approach failure, you’ll see the elbows start to flare more and more and the bar touch higher and higher on the chest. While there is certainly some wiggle room, you want to make sure that most of the reps touch down in the same position.

I’m all about low bar squats for maximum squatting strength, and I like high bar for targeting more quad. However, I would estimate that around 1 in 6 women just can’t seem to get the low bar position to feel right – it either hurts or just doesn’t feel stable. This applies more to lankier women that haven’t built up a lot of upper back mass. Interestingly, I started all of my ladies off with high bar, and upon teaching them low bar, several of them set PRs on their very first attempts, whereas others couldn’t stand the low bar. To be fair, it might just be that I wasn’t patient enough with these clients and that I need to start then off lighter and gradually work up in weight, but after a few sessions of complaints, I just told them to stop experimenting with low bar and stick to high bar. The picture below shows a good example of high bar versus low bar – note that the back muscles in the picture on the right are squeezed together to provide a shelf.

Here’s another interesting occurrence that I’ve noticed. Some of my women can perform RKC planks just fine and hold a posterior pelvic tilt like a boss. However, when they try to do this during a push-up, they can’t hold it down. They can set up at the top in PPT and lock the pelvis in place, but upon transitioning from the eccentric phase to the concentric phase, they lose it. I think to think that this is related to the strength of the pushing muscles and that either 1) the body needs a slight hypextension in the spine to be able to perform the push ups, or 2) it’s asking too much of the body’s neural resources to perform the push up and hold the PPT at the same time. Over time I assume that this ability will improve.

If you’re a personal trainer or strength coach, hopefully my observations jived with yours. If you’re a lifter, I hope that this article has made you feel less “weird.” Many of these issues are very small in the grand scheme of things; they just require minor work-arounds and the ladies are always able to achieve incredibly productive training sessions.