Strength coaches and physical therapists tend to use fancy terminology to describe knee caving in a squat. For example, the terms knee valgus, valgus collapse, and medial knee displacement are tossed around quite frequently. Most strength coaches believe knee caving to be undesirable from a knee health standpoint. Countless greats in S&C circles seem to fall into this camp, including experts ranging from Kelly Starrett, to Louie Simmons, to Dan John, to Mike Boyle, to Mark Rippetoe, to Eric Cressey, to Tony Gentilcore, to Mike Robertson. It is thought that keeping the knees tracking over the toes in the squat will produce the least internal load on the passive knee structures, thereby keeping them healthy. Another champion of the knees out strategy is yours truly. I’ve written articles and filmed plenty of videos on this topic, including THIS one addressing valgus collapse as a whole, THIS one showing a simple squat correction, THIS one discussing coaching cues. Also, THIS guest blog from Derrick Blanton shows another simple correction strategy, and HERE is an article by my colleague Chris Beardsley discussing the mechanisms of knee valgus.

However, over the past couple of years, the “knees out” mantra has been challenged by some highly competent and knowledgeable lifters. For example, HERE is raw powerlifter Dan Green casting doubt on the efficacy of the knees out strategy, and HERE is the Chinese Olympic Weightlifting team’s take on knees out. These folks believe that allowing the knees to come in slightly at the bottom of the squat is safe and produces a stronger squat. A couple of years ago, I coined the term “valgus twitch” to describe the tendency of very strong lifters to utilize a quick “knees in” strategy when emerging out of the hole during squats. You see this all the time with powerlifters and weightlifters.

It should be pointed out that this debate does not apply to beginners. When beginners first learn the squat, the vast majority of them cave inward at the knees. After sufficient practice with sound technique, most lifters are able to regroove their motor patterns and their automatic default squatting technique will shift to a knees out strategy. I would also argue that women tend to cave inward even more so than men. In fact, every single female client I’m currently training battles the tendency to medially displace their knees when squatting. Knee caving is therefore a natural tendency of human movement. Beginners do it. Women do it. And even some of the most advanced male lifters do it.

However, there is a difference between beginners and advanced lifters regarding knee caving in that beginners will tend to cave inward via a combination of hip adduction, hip internal rotation, tibial external rotation, and foot pronation, and they’ll tend to exhibit this valgus collapse during a more broad portion of the movement. In contrast, more advanced lifters seem to briefly “twitch” into hip adduction when at the bottom of the squat as they initiate the concentric portion of the movement, and they usually revert back to having their knees out after they pass the sticking region.

Then Why Do We Cave?

Recently, Jonnie Candito of Candito Training HQ collaborated with my intern Andrew Vigotsky in order to tackle this question. Please watch the following video for a breakdown of possible factors as to why we might cave inward at the knee during squats. I found myself nodding in agreement throughout the entire video.

My Take – Why Do I Think Strong Lifters Cave?

Many beginners cave inward at the knees during a squat on account of insufficient ankle dorsiflexion range of motion or very poor gluteal strength and development. But we’re not talking about beginners right now. We’re talking about advanced lifters.

If an individual can squat with sound knee mechanics with light loads and keep the knees tracking over the toes, then this means that they do not have a mobility, stability, strength, or coordination problem. Their ankles are not too tight. Their hips are not too tight. The muscles that supinate the feet, invert the ankles, and abduct/externally rotate the hips are strong and stable enough. Some of my powerlifting friends exhibit knee valgus when they’re squatting. Am I supposed to inform them that they have weak glutes when they can squat, deadlift, and hip thrust over 500 lbs and lateral band walk like a boss? Methinks not. 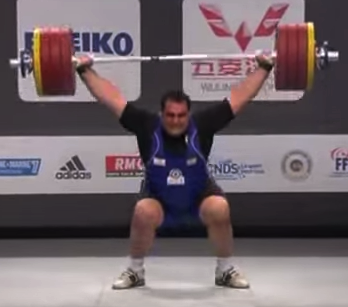 Hi World Record Holder in the Snatch, are you aware that your glutes are weak? Yeah right.

There has to be some sort of strength advantage to caving inward at the knees, or else we wouldn’t resort to this strategy when maxing out or repping to failure. Since many lifters do in fact do this, we should try our best to understand it.

I have thought about this for many years and I’ve come to the conclusion that there has to be some sort of leverage improvement or lengthening associated with one or more of the hip extensors when the knees are caved inwards. In other words, when the hips are slightly adducted and internally rotated (valgus collapse), one or more of the muscles that extend the hips (the main muscles here are the gluteus maximus, hamstrings, and adductor magnus) would need to be stronger in this position. A muscle can be stronger if it is lengthened to a greater degree, more highly activated, or placed in a position with more favorable leverage (greater internal moment arm).

To my knowledge, there is currently no research investigating the hip extension torque/strength capacity of the various hip extensors at the bottom of the squatting movement in varying degrees of knee varus and valgus (different knee positions). Therefore, I’m unaware as to whether the gluteus maximus, hamstrings, adductor magnus, or hip external rotators are stronger as hip extensors with the knees exhibiting valgus collapse.

Side Note for Sports Science Students: In order to tackle this question, it would require an entire PhD thesis (hint hint aspiring PhD sports science or muscle modelling students). The first study could investigate 3D joint angle movements, EMG, sticking regions, and torque angle curves in the deep squat. The second could investigate hip extension torque in an isokinetic dynamometer with varying degrees of knee varus/valgus and also vertical force production on a force plate during an isometric deep squat with varying degrees of knee varus/valgus. The third could utilize musculoskeletal modelling to estimate moment arms and lengths of all main hip extensors throughout the hip flexion-extension movement continuum in varying degrees of knee varus/valgus. The fourth could be a training study to see if hip strengthening and motor control training improves upon squatting technique with maximum loads and helps eliminate knee valgus. But I digress…

I surmise that the lateral hamstrings (biceps femoris long head) would be stretched to a greater degree in knee valgus, whereas the adductors and possibly the medial hamstrings (semitendinosus and semimembranosus) but not the gluteus maximus or lateral hamstrings (biceps femoris long head) might have greater hip extension moment arms in knee valgus, but this would require research for verificaiton. A recent article published in Clinical Biomechanics with the title, “Lengths of the external hip rotators in mobilized cadavers indicate the quadriceps coxa as a primary abductor and extensor of the flexed hip” indicates that the hip external rotators (namely the piriformis and obturator internus) are in fact strong extensors of the hip, and their length is increased in hip flexion and adduction (meaning that they produce greater passive elastic force at the bottom of a squat, and this is enhanced when the knees are caved inward). Considering that the hips are more heavily relied upon as loads increase in the squat, it makes sense that lifters would resort to mechanical strategies that would enhance the strength of the hips with maximal squat loads.

My current position on the knees out debate is that: