When I first started training clients full-time, I assumed that I’d specialize in training athletes. I bought all sorts of equipment from Elitefts including a huge power rack/platform with all the accessories (box squat box, step up attachment, monkey chin bar, dip bars, band peg attachments), a 45 degree hyper, glute ham raise, reverse hyper, competition bench press, incline press, deadlift lever, chalk bin, bands, chains, specialty barbells, etc. I situated the equipment in my garage and was in awe at how manly my gym appeared! I was well on my way to be the next Joe DeFranco.

What happened next was unexpected. A bunch of female friends and relatives of mine started requesting that I train them. At first, I told them, “I’m not sure, my equipment is more geared toward training athletes.” They’d say, “Cool, when can I start?” I quickly realized that women like this type of training and all of a sudden I’m training tons of women.

Next thing you know, I open up my own studio and within three months I have 55 clients; probably 45 of them were women. If you train a few women well, out of nowhere you’ll have tons of female clients through word-of-mouth advertisement as they love to tell their friends about their trainer. I’ve really grown to love training women over the past five years, and here are some things I’ve learned along the way:

A very recent study showed that following a bench press training session, men took 48 hours to return to their previous levels of strength, whereas women took only 4 hours (Judge & Burke, 2010). Women are simply not as physically strong as men (especially in upper body strength) and don’t tax their muscular and nervous systems to the extent of males. For this reason, they should not be trained the same way as men and should be prescribed higher training frequencies. One of the primary reasons why my female clients get extremely strong and dramatically improve their shape is due to the fact that I train their entire bodies very frequently to take advantage of their superior recovery abilities.

2. Total Body Training is Best for the Majority of Women

In my experience, women do best with total body workouts. This is closely related to topic number one above. They can recover quicker and therefore probably detrain quicker as well. Men will swing a sledgehammer at a nail and whack it down in one attempt, and then take a nap. Women will take a hammer and continue to tap on the nail until it’s all the way in, and then move onto the next nail. What I’m getting at is that women should not perform bodypart splits or even lower/upper splits. It doesn’t matter how many times a woman trains with me per week (once, twice, three times, four times, or even five times), each session I’m going to hit her entire body. The trick is to give them a great workout without creating too much fatigue or soreness the following day.

Women initially fear weight training and don’t want to be surrounded by a bunch of libidinous men leering over them, grunting, and throwing around heavy weights. Many like to train with fellow females so they don’t feel threatened, and they need reassurance and guidance. Women appreciate a confident trainer so make sure you exude confidence in your methods and in their ability to succeed. Most important, they thrive off of compliments! Notice the little things and compliment good effort and you’ll have a client for life.

4. Women Have Anatomical and Physiological Differences

Women are anatomically and physiologically different than males. They have wider q-angles which predisposes them to knee injuries, they are taught to “sit like a lady” which probably reinforces valgus-collapse over the years, they produce on average a tenth of the testosterone of males, and their estrogen, progesterone, FSH, and LH fluctuate throughout the month according to their menstrual cycles. They have different strength balances than men (less hamstring:quadricep strength ratio, greater lower body:upper body strength ratio) and their muscles fire differently than men as well (glute and hamstring timing often fires earlier due to a perception of weakness).

For these reasons, it’s important to teach proper mechanics, strengthen the posterior chain, and be understanding of mood-swings when training women because often it’s not their fault.

5. Women Can Ditch Flexibility/Mobility Work in Favor of Stability/Strength Work

Women are much more flexible on average than men. In fact, many are hypermobile. For this reason, they often do not need to do any stretching or mobility drills. They already possess good flexibility and many have laxity in certain joints. For this reason, it’s wiser to focus on stability and activation exercises in addition to some basic strength movements during the general dynamic warm-up rather than static stretches or mobility drills. If you have 50 minutes to train a female, most of that 50 minutes should be used for strengthening and conditioning. If strength exercises are taken through full ranges of motion then they’ll retain joint mobility while adding stability and strength to the joint which is exactly what they need.

One drawback of hypermobility is that many women over-extend their lumbar spine when they lift. It’s common to see women excessively arching (hyperextending) their low backs when they squat, deadlift, do push ups, hip thrusts, back extensions, and ab wheel rollouts. You need to teach them how to control their cores and maintain neutral spines. 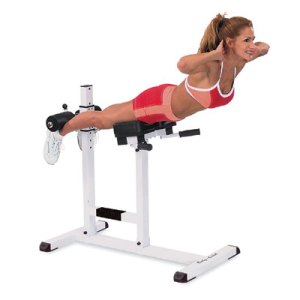 *too much lower back arching

6. Fun and Variety Never Did a Woman No Harm

Women like to have fun during their workouts and they appreciate variety. Make them laugh from time to time; you don’t have to act like a drill-sergeant. Conversely, don’t be afraid to lay down the law when necessary. There are so many great exercises and women like learning little tweaks from time to time. Here are some of the main exercises I employ when I train women:

I throw in the following for variety as well:

You don’t have to do all of this every single session, but try to plan well-balanced programs.

Utilize paired-supersets and you’ll be able to squeeze in more work and density in your sessions.

Most women don’t know this, but deep-down they love feeling athletic and “hard-core.” Over time they will love it if you get them to be able to perform a chin up or a proper push up (without hips sagging). They love pushing cars around as they never realized that they could do it. They will learn to love deadlifting if you teach them well. Women love getting strong; it empowers them. When they realize that heavy lifting won’t automatically make them overly muscular and that if often causes them to lean out and improve in shape, they’ll be setting records left and right. It’s your job to get them to realize this.

8. Women are Competitive…With Thine Own Selves

Many women do not like competing with men or with other women, but they love competing against themselves. Start off slow and know how to regress and progress exercises. Bump them up slowly but surely and pretty soon they’ll start getting strong. Keep a journal and log every workout. Tell the female client what she did last time she did the exercise and she will try her best to beat it. Often women will beat their records every week for months on end when they first start training.

Women are often too intimidated to offer feedback. Sometimes they’ll tell you something and you’ll ask them why they didn’t tell you sooner. They’ll reply with, “You never asked.” This is why you need to ask a ton of questions. Before every session ask them if they’re sore anywhere. If their low backs are sore skip the deadlifts. If their adductors are sore don’t go into deep ranges of hip flexion and opt for high box squats and rack pulls. Ask them if the exercise “feels right” and where they feel it working. Ask them if they like their program, ask them if there is anything they’d like to be doing that they haven’t been doing. The placebo effect is well-documented and very effective; if a client believes in the program then they will achieve better results.

10. The Glutes Make a Woman

Women can buy breast implants, but getting a nice butt takes hard work. The glutes get activated best from high-load or high-velocity movement. Research shows that the glutes don’t get activated much from simple activities like standing up from a chair and walking; the body chooses instead to rely on the quads or leave the job for the more economical and elastic-storing hamstrings. Most women will come to you with poor glute activation and development due to the fact that many stop being active after high school. If you can make a woman’s butt look nicer, everyone around her will notice and she’ll start getting compliments left and right. Now she’ll be hooked on fitness for life because she won’t want to lose her nice booty. It sometimes takes time for the glutes to come around; if it took ten years for the glutes to atrophy away and sag they’re not going to come back in one week. If you’re a good trainer, for the most part every client will feel their glutes working very well within two months. Hammer the glutes every single session and they’ll respond best.