10 Training Tips for the Ladies

It’s no secret that I primarily train women. At the new Glute Lab, there are around 10 ladies who regularly train with me throughout the week, and only 4 men (I try very hard to resist taking on new clients at the moment so I can focus on my PhD). Since I focus on women, I tend to see a lot of things that other trainers might not see. In fact, you’ll be hard-pressed to find anyone out there who pays closer attention to the nuances between gender differences in strength training. Many of the tips below can apply to either sex, but they’re generally more suited for women than men. Here are ten training tips for the ladies, in no particular order of importance.

1. There’s No Shame in Doing Top Down Deadlifts

In my latest T-Nation article “20 Ways to Train Smarter” (click HERE if you haven’t read it yet, I provide some unique training tips), the first thing I discussed was squat and deadlift form. You don’t want the hips to shoot up. Notice in the pictures directly below that you have knee extension without simultaneous hip extension. This is mostly due to weak quads in relation to the hips. In training, don’t let this happen. 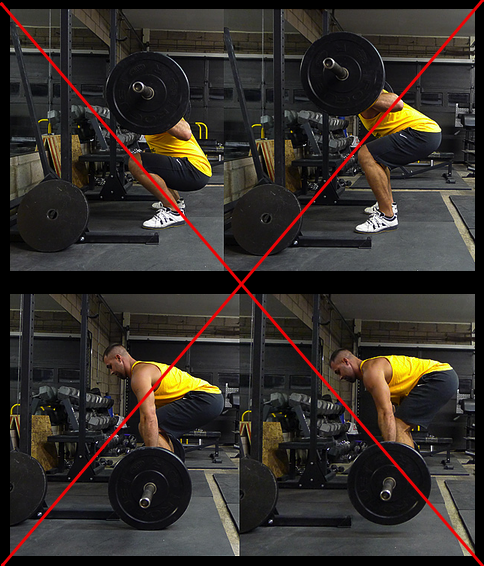 Here’s what you want to see – below you’ll notice that the knees and hips extend at the same rate. 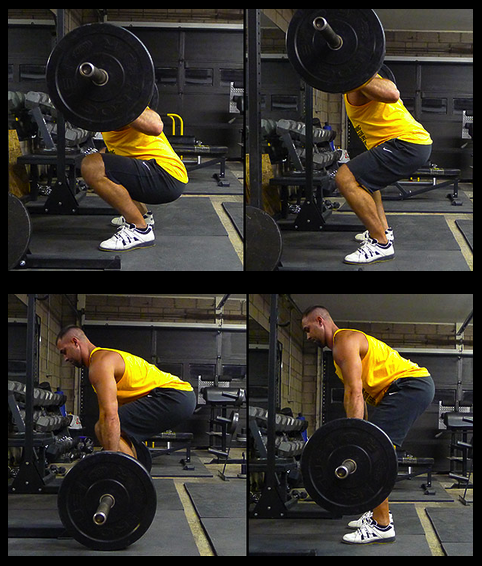 Some of my female clients have some seriously crazy situations in the deadlift in that whatever they can pull for one rep, they can get for 5 reps. In other words, if they can get it once, they can end up getting it for five reps. The first rep is so challenging that they can barely lift it, but then they can repeat it four more times with the help of the stretch-shortening cycle (SSC). The SSC is a mechanism whereby performance is enhanced due to elastic and also neural mechanisms (titin and the myotatic reflex, respectively, for those science geeks out there).

I wrote and filmed an entire series where I prepared two bikini competitors for a powerlifting competition in 6 weeks titled “Operation Get Strong and Sexy” (click HERE if you’re interested in seeing the video footage for all 6 weeks including the competition). In the sport of powerlifting, it’s absolutely necessary to begin each deadlift from the floor. You also don’t want to use lifting straps, since you’re not allowed to use them in competition (you gotta build up your grip strength). However, if you don’t plan on competing in powerlifting, there’s nothing wrong with performing deadlifts from the top down.

Here’s what top down deadlifts look like – you unrack the bar from a standing position, back up (or move forward, as shown in the video below), perform your reps, and then re-rack the bar.

What’s the point of doing deadlifts this way? There are two main reasons.

And second, for improved performance. Since you get assistance from the SSC, the first rep won’t be brutally hard, which will increase the total number of reps you can perform during a set with a given load. Just don’t get greedy, as form can suck with bottom up deadlifts or with top down deadlifts if you go too heavy or push a set too far in terms of technical failure.

If you’re a powerlifter or you ever plan on competing, then start from the bottom up. But if you train primarily for physique purposes, there’s no shame in deadlifting from the top down, or in wearing lifting straps if grip is an issue.

If you follow the sport of powerlifting, you’ll note that many of the competitors have squat strength that rivals their deadlift strength. In fact, many of the absolute strongest powerlifters in the world can squat more than they can deadlift. This used to only be true for geared powerlifting, but it’s becoming more and more common in raw powerlifting as well. This is because most of them are of shorter or medium heights combined with ginormous thighs. But it’s not just height, it has more to do with femur length relative to torso height.

However, long femurs and mediocre quad development lends itself to falling forward during squats (performing “squat mornings” – which are a combination of squats and good mornings), in addition to a skewed squat : deadlift ratio. I explained this in detail in my 2×4 Bonus on squats & deads.

I’ve trained a lot of women in my life. I can recall several over the years who could deadlift 135 lbs for reps but were still performing goblet squats (they hadn’t graduated to the bar yet). You know who else probably have markedly skewed deadlift : squat strength ratios? The Victoria Secret models. If you’re not a powerlifter, then who gives a shit? Just train both hard and be proud of your strength, no matter where it lies. 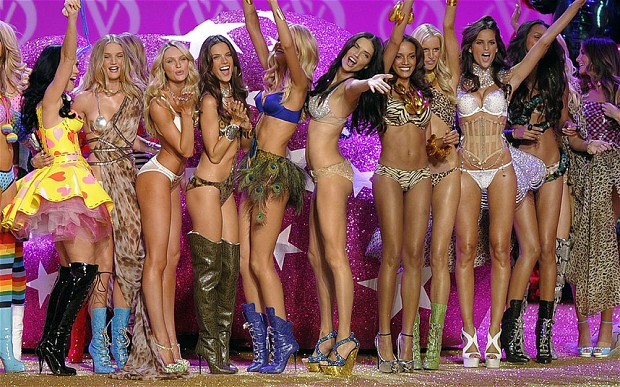 3. Just Say No to Squat Mornings

I’m going to keep belaboring this point. Many of my female clients can “squat morning” more than they can squat while staying more upright. If they’re going for a PR, they can just allow their torsos to lean forward considerably. However, in training, we’re always aiming for more upright squats. Not only do we do lots of goblet squats and front squats, but we also work very hard to avoid excessive forward leaning during back squats. Save any excessive form breakdown for the platform (if you ever compete). In training, use excellent technical form 99% of the time.

You know what I love about front squats? If you lean too far forward, you dump the bar. Therefore, they prevent excessive leaning and force hip-dominant back squatters to rely more upon their quads. Click HERE to learn how to front squat. And don’t worry if your front squats sucks. First of all, you have to attack your weaknesses to get strong, and second, it’s your PR – own it!

4. Tailor Your Bulgarian Split Squat Form According to Your Weaknesses

I also mentioned this tip in my latest T-Nation article (HERE is the link again). I have most of my ladies perform Bulgarian split squats in a quad dominant style, with a slightly shorter stride and more upright trunk, like this: 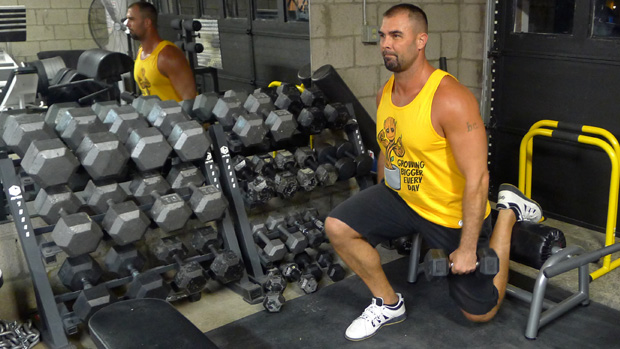 This helps prevent the “squat morning” I mentioned above by targeting the quads to a better degree. However, I have some clients who squat incredibly upright and have quad strength that is superior to their glute strength. This is more common in beginners. In this case, I’ll teach them high box squats (click HERE to learn how to high box squat) and also have them Bulgarian split squat in a hip dominant fashion, characterized by a longer stride and a greater forward trunk lean, like this: 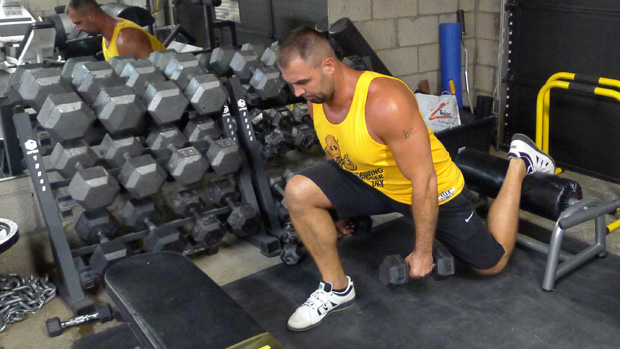 Tailor your Bulgarian split squat form according to your weaknesses.

Ladies, you do know that the eccentric component of the repetition is equally as important as the concentric portion, right? Click HERE if you want to learn more about concentrics versus eccentrics. Many women will perform a set of chin ups, and on the top of their last rep, they just drop down. Don’t do this. On your last rep of chins, lower yourself under control, making sure to fight the negative all the way down until your arms are fully stretched out. Watch this woman work her negative chin up repetition:

Several years ago I posted an article on push-up research. I referred to THIS study which showed that subjects supported 69% of their bodyweight in the top position of a push-up and 75% in the bottom position of a push-up, compared to 54% and 62% for the knee push-up, respectively. Try doing knee push-ups with the elbows tucked at the sides – they’re not easy! I’ve had a few of my ladies do close grip knee push-ups (see video below), and at first they were like, “I can do regular push-ups, I don’t need to do girl push-ups!” After doing 2 sets of 10-20 reps of them, however, they were convinced and no longer thought of them as “girly.” In fact, one of my clients switched from regular push-ups to narrower width knee push-ups and it’s improved her bench press strength markedly.

7. “Chest Up” With Inverted Rows but Not With Hip Thrusts

The “chest up” cue can work miracles in some situations but be detrimental to form in other situations. Take a roundback deadlifter with tight hammies and tell her “chest up” and it can shore things up very quickly. Tell a hyper flexible deadlifter the same thing and she might end up excessively hyperextending the spine, which isn’t good.

With inverted rows, you want to keep the chest up. The scapula are followers to the t-spine during rowing, so if you flex the t-spine the scaps will anterior tilt and the shoulders will migrate forward. If you maintain thoracic extension, the scaps will hold posterior tilt and the shoulders will stay back. So with rows, chest up is a good scapulothoracic strategy.

Keep the chest up with inverted rows

Keep the ribs down with hip thrusts

8. Burn Out With Delt Blasters

At the end of a training session, I sometimes have my women do delt blasters, and they freakin’ love them. Usually they use between 5-12 pounders and do 8-12 reps of the following four exercises all in a row without stopping:

Looks like this (I had Camille just do 3 reps of each):

9. Center the Bar and Let it Settle Before Starting the Bench Press

Many of my female clients are too speedy with their bench press. They’ll unrack the bar and go right into their set of bench presses. You want to unrack the bar, center it over the shoulders, let it “settle,” and then begin the set. When you finish the set, lock it out for a second before you rack it. This might not make a difference when you’re a beginner, but as you gain strength, it starts to matter more and more.

10. Pistol Squats – Raising Dumbbells in Front of You Actually Makes it Easier

A couple of weeks ago, my client was telling me that she can almost do a pistol squat. I asked her to show me and she attempted one with just bodyweight. I told her to hold onto 10-lb dumbbells and try it, and she was able to do it (HERE is the video). Many people don’t realize this, but the counterbalance aspect (raising the dumbbells in front of the body) actually makes it easier. It does this by shifting more torque requirements onto the hip extensors and less onto the knee extensors. I explained this in detail in my 2×4 squat/deadlift bonus as well. Give counterbalance pistol squats a try before attempting to perform bodyweight pistols. 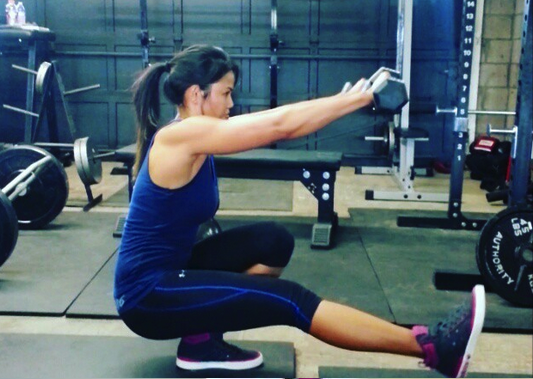 The counterbalance makes it easier

So there you have it! Ten tips for more productive female strength training. Give these tips a try and take your performance to the next level.

What’s All the Fuss About EMG?

What’s All the Fuss About EMG?