How to Front Squat

The front squat has always been a staple exercise in Olympic weightlifting programs, as it serves as the base for the catch position in a clean. However, the front squat has recently gained traction in both the powerlifting community as well as training programs for the general population. The front loaded nature of the lift necessitates a more upright posture, putting more stress on the quads and less stress on the spine while creating a demanding core stability challenge. Unfortunately, the bar positioning, can be difficult to learn and can feel quite awkward, which explains why many lifters shy away from it. Make no mistake about it, the benefits of the front squat are innumerable in terms of athletic transfer, core strengthening, quad-building, and improving back squat and deadlift strength. 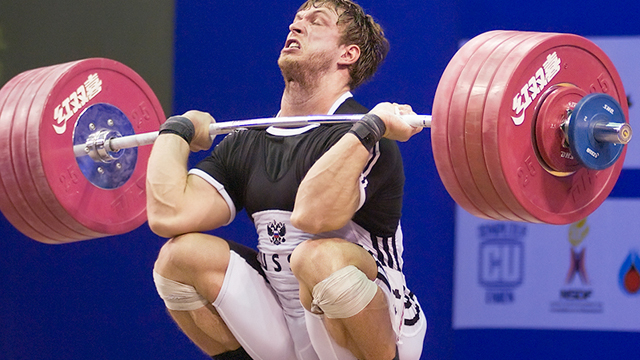 The catch position in a clean

The setup in a front squat is pretty much identical to that of a back squat, except that the bar will rest on your front delts rather than your traps. You’ll still want to set up with your feet directly under the bar and squat the weight up while walking the bar out using as few steps as possible.

First, you’ll need to choose what type of grip you’re going to use. The two main options are either an Olympic or cross-arms grip. The cross-arm grip will be easier to achieve for the majority of lifters, as the Olympic style grip requires a decent amount of wrist flexibility. For those initially limited in wrist mobility, unless you’re training for Olympic style lifting, I recommend going with a cross-arm grip to expedite progress. You can build your front squat strength while performing stretches to increase wrist flexibility, which will enable you to cross over eventually and start utilizing the Olympic style grip if need-be. 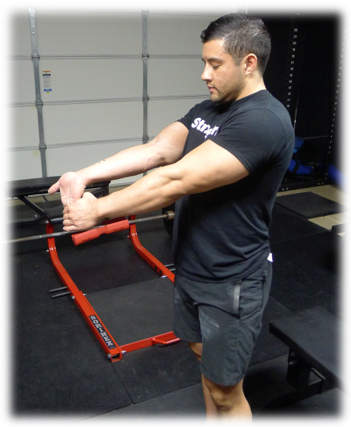 A third option for grip is to use lifting straps looped around the bar, so that the bar still rests on the shoulders but you are holding onto the ends of the lifting straps. This is good for people with very limited shoulder mobility. Whichever grip you choose, just make sure your elbows stay elevated throughout the exercise. If you allow the elbows to drop down, the bar will roll forward and take you out of position.

Another factor to consider concerning bar positioning is that the bar will rest very close to your neck. When positioned correctly, it will feel almost as if the bar is choking you. Trying to create too much distance between the bar and your neck is a common mistake among beginners. Doing this will make it difficult to keep the bar resting solidly on your delts, and you’ll be more likely to fall out of position.

While all Olympic lifters go with the Olympic grip, many powerlifters opt for the cross-arm grip. Tinker around and figure out what works best for you.

With the front squat, you won’t sit back as you would in a regular squat, rather, you want to think about sitting down between the knees so that your hip’s travel more vertically rather than backward and forward, with the torso staying more erect compared to a back squat.

The chest should remain tall, the elbows high, with the knees travelling forward slightly. Think about getting your butt to your heels while maintaining a neutral spine and keeping the majority of weight on your heels and mid-foot. To return to the start position, push through the heel and mid-foot and extend the hips and knees simultaneously until you are locked out.

When it comes to depth in the front squat, you want to go as low as possible or ass to grass while maintaining a neutral lumbar spine. However, many lifters won’t be able to go rock bottom, at least initially. A small amount of butt wink is acceptable, but this should be limited. If you are unable to achieve full depth without rounding, just limit the depth until you develop the appropriate amount of mobility and coordination. 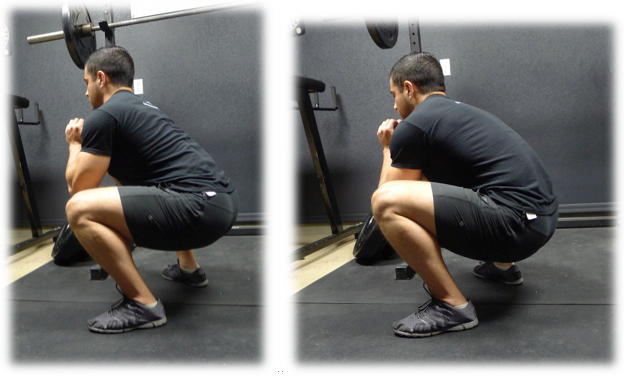 With practice and increased strength, the amount of butt wink you have often dissipates over time. But hip anatomy plays a large role in terms of defining how deep a lifter can ultimately go. So know that squat depth can be improved upon, but not everyone will be able to go rock bottom. Many lifters should just settle for a parallel squat depth.

Another strategy to minimize butt wink is to work on improving ankle dorsiflexion through soft tissue work and ankle mobility drills. The use of Olympic lifting shoes will allow for more ankle dorsiflexion. Squatting with the heels elevated onto 5-lb plates will help as well. Many lifters simply feel better when they squat in Olympic shoes. If your ankle mobility is limited, give Olympic shoes a try while working on bringing up your ankle mobility so that you can eventually make a switch back to normal shoes if need-be. 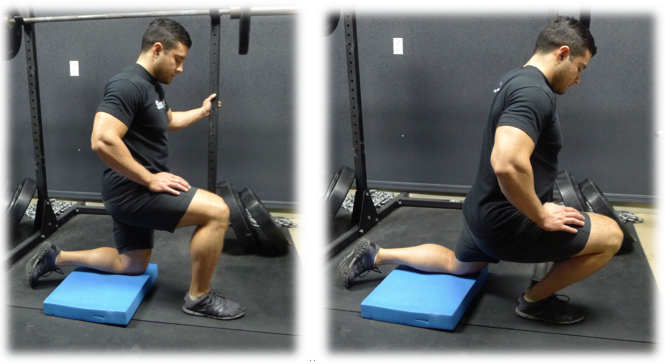 If you find that it is difficult to maintain good upright posture in the torso during the front squat, chances are you lack the requisite strength and mobility in the thoracic spine to get into a good position, possibly because you’ve been sitting all day long at a desk. If this is the case, it’d be wise to throw some thoracic mobility drills into your warm up before beginning front squats. They don’t have to be super complex, but if you perform them on a consistent basis, you’ll soon notice a marked improvement in your ability to maintain an upright torso during the motion.

As you gain experience in the front squat, certain aspects of the lift become increasingly important. The front squat lends itself to medium and low repetitions and is not very conducive to high rep lifting (above 10 reps). Since you’ll become markedly stronger over time as you become accustomed to the front squat, keep the following considerations in mind:

When performing heavy front squats, you’ll need to take a huge breath before you descend (around 70-85% of maximum tidal volume). Hold this breath as you descend and even as you rise upward. When you pass the sticking-region (the most difficult portion of the lift), then you can blow out your air.

Between the knee joint and the hip joint, the hips are stronger in most lifters. You want the knees to be very strong, so the front squat is crucial for building knee strength. However, when loading approaches maximum or when reps approach failure, the body will want to lean forward to place more stress on the hips since the quads will be fatigued. This is where the lift can get a bit dangerous, as when you lean forward your elbows will drop and the bar can roll off of the shoulders.

If this happens, simply get out of the way and let the bar fall. Don’t try to catch the bar in the crux of your arms (in the Zercher position), as this could lead to injury. For this reason, front squatting with bumper plates on a platform is ideal. Pay attention to forward trunk lean and perform more sets with submaximal loading and good bar speed rather than pushing the intensity and letting form degrade.

For front squats, I find that 3-5 sets in the 1-5 rep ranges are ideal. For beginners, 3 sets of 8 reps is a good starting point. As time advances, the loads will increase and the reps can decrease. If front squatting once per week, 5 sets of 5 can be very effective. Lifters seeking maximal strength can experiment with heavy singles, doubles, and triples once they’ve gotten the form down pat. The occasional high rep set of front squats can certainly be performed, but many lifters find that high reps doesn’t seem to fully tax their legs and instead taxes their upper back (which can definitely be a good thing).

Newer lifters will often find they have trouble performing the front squat under any circumstances. This is especially true for female lifters, as the olympic style grip often requires a certain amount of load to keep the wrists down in position; Additionally, if a lifter is only using 50 to 70 pounds total, it may be wise to opt for goblet squats until a certain strength threshold is reached. The benefits will be similar, and goblet squats are much easier in terms of getting into position.

To perform a goblet squat, cup a dumbbell in the palms of both hands, holding it tight to your chest and keeping your elbows in. Just as in a front squat, you want to descend vertically, squatting in between your knees, going as low as possible while maintaining a neutral spine. Force the knees out and do not let the dumbbell drift away from the body during the movement. Once you’ve reached the bottom position, drive through the heels and mid-foot until your hips and knees are locked out. 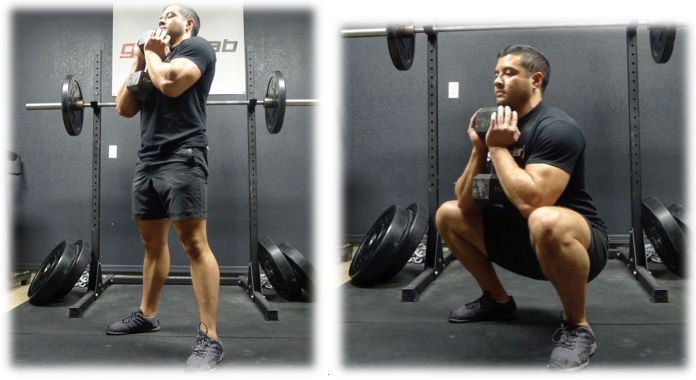 Here’s a video tutorial on goblet squats in case you’re not familiar with them.

Front squats are an excellent addition to any training program and have become a very popular support exercise for anyone looking to increase their back squat. Interestingly, due to the strengthening of the thoracic extensors, many lifters find that the front squat builds the deadlift as well.

The upright and front loaded nature of the front squat stresses the quads and challenges the core. If you’re unable to perform front squats due to mobility issues, or just aren’t strong enough to use a barbell yet; build up your strength with goblet squats while you work on your mobility using some of the drills shown above. Some lifters who experience back discomfort during back squatting may find that they’re able to front squat pain-free. Strength coaches might opt for front squatting with their athletes due to the decreased tendency to lean forward excessively. If you haven’t given the front squat a try, I highly recommend it.