Today an article that I co-wrote with my friend Elsbeth Vaino appeared on TNation. Here’s a link to the article, it’s called, “The Best Damn Pushups Article, Period!“ 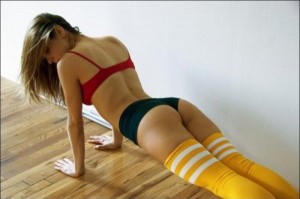 The TNation editors always do a great job of sprucing up my articles and discarding what’s not necessary. I always make my articles too sciency, but for those interested in a slightly more comprehensive lit review on pushups than what was found in the article, here you go:

An et al. (1990) found that how you set up for the pushup affected the relative joint loading during the exercise’s movement. The three main factors that influenced the intersegmental joint loads during pushups were the location of the palms relative to the shoulder joint, the plane of the arm movement, and the relative foot positions. Furthermore, the researchers found that the speed of pushup movement affected the inertial load.

Beach et al. (2008) showed that suspended pushups activated more core musculature than regular pushups. Based on this finding you can use blast straps or a TRX to increase the efficacy of the pushup exercise.

Cogley et al. (2005) found that narrow base pushups led to higher EMG values in the triceps brachii and pectoralis major than wide base pushups. Popular belief indicates that wide base pushups activate more pec fibers, but this study showed otherwise.

Donkers et al. (1993) showed that peak elbow joint force during pushups decreased if the hands were positioned either apart (wide base) of superior (high placement) from normal position. Normal hand position produced 56% of maximum isometric torque at the elbow joint, compared to 29% with hands apart and 71% with hands together. When the hands were placed superior in a high placement, the elbow ligaments significantly opposed more torque. When ligaments oppose torque, the ligaments are stressed but muscle force requirements diminish since the ligaments are “picking up some of the slack” so to speak.

Hogwarth (2008) found that in order to keep the core stable during pushups, on average the abdominal muscles contributed 64%, 87%, and 4% to vertebral joint rotation stiffness (VJRS) about the flexion/extension, lateral bend, and axial twist axes, respectively (VJRS is a measure of joint stability). The rectus abdominis contributed around 43% to VJRS about the flexion/extension axis at each lumbar joint, and external oblique and internal oblique contributed around 53% and 62% to VJRS about the lateral bend and axial twist axes, respectively, at all lumbar joints with the exception of L5-S1. Due to changes in moment arm length, the external oblique and internal oblique contributed 56% and 50% to VJRS about the axial twist and lateral bend axes, respectively, at L5-S1. Transversus abdominis, multifidus, and the spine extensors contributed minimally to VJRS during the push-up exercise. This means that the rectus abdominis prevents your hips from sagging and your lumbar spine from hyperextending, whereas the obliques prevent you from shifting to one side or twisting while you perform pushups.

Lehman et al. (2006) found that the pushups with the hands placed on a Swiss ball significantly increased tricep activation. Swiss ball pushups also increased pectoralis major, rectus abdominis, and external oblique activation compared to pushups on a bench from the same angle, whereas pushups with the feet placed on a Swiss ball did not affect muscle activity compared to pushups with the feet on a bench from the same angle. Based on these findings it appears that as long as you kept the torso angle constant, it would be more effective to perform exercises such as Swiss ball and Bosu pushups in comparison to bodyweight pushups as long as you place the hands on the unstable piece of equipment rather than the feet.

Lou et al. (2001) showed that internal rotation of the hand position or full pronation of the forearm during pushups led to greater posterior and varus forces on the elbow joints which could produce injurious shear forces. Based on this finding, it is recommended that internally rotated hand positions should be avoided for optimal elbow health.

Sandhu et al. (2008) found that pushups with the hands placed on a Swiss ball significantly increased tricep and pectoralis major activity compared to normal pushups, but only during the eccentric phase. The researchers also found that serratus anterior and upper trapezius activity did not change from standard pushups to Swiss ball pushups.

Youdas et al (2010) found that depending on the hand position, the push up activated between 73-109% MVC of the triceps brachii, 95-105% MVC of the pectoralis major, 67-87% MVC of the serratus anterior, and 11-21% MVC of the posterior deltoid musculature. The researchers also found that the narrow base position was the most effective position for increasing tricep contribution, and that the Perfect Push up™ device did not enhance muscular recruitment. 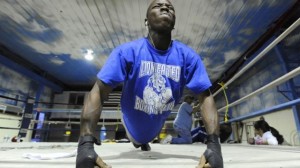