I’m going to be quite honest…I love rotary training. I believe it helps bridge the gap between traditional weight room strength and on-the-field power. Any fool will realize that simply increasing muscle mass via heavy compound lifting (let’s ignore performance enhancing substances) will improve rotary power – just look at guys like Mark McGwire, Sammy Sosa, and Barry Bonds. These guys could practically bunt homeruns after they sufficiently increased their muscular hypertrophy. This is due to the fact that standing rotation power relies on high contraction velocities via a bunch of different muscles throughout the human body. On a scale of 1 to 10, general training through heavy compound movement might get you to an 8, but if you want to reach your maximum capacity (ie: a 10), you need to perform specific rotary movements. For example, squat strength is important but it’s not the end-all be all for shot-putters using the rotational technique (Kyriazis et al. 2009). 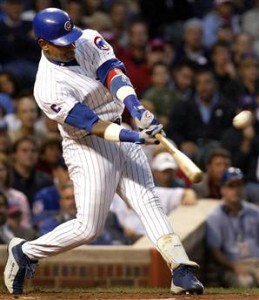 Standing rotary exercises are usually performed with loads held at arm’s length which create exceptionally long levers and high torques at the spine which are countered through ground reaction forces at the feet. For this reason all of the joints between the arms and the feet are called into play, making rotary training a highly-effective form of “total body training.” You’ve got spinal rotation, hip internal rotation in the front leg, and hip external rotation in the rear leg all summating to generate maximum torque which is transferred through the body from the feet to the hands. This requires a tremendous blend of stability, mobility, propulsive power, and coordination. Despite the fact that modest levels of resistance are often used during rotary training, the long levers and multiple muscles involved in producing or preventing rotation produce large compressive loads on the spine and require high thresholds of neuromuscular and metabolic activity. This is why a couple of sets of rotary training can leave you quite exhausted.

Most people throw in some token rotary training toward the end of their sessions and try to feel the movements solely in their obliques. While the obliques are certainly important for rotary power, so are the gluteus maximus and other hip external rotators.

In fact, I believe that a strong, powerful gluteus maximus is often what separate the elite athlete from the average athlete. As athletes advance, they learn to incorporate their hip and leg musculature into their movements to a much higher degree. For example, beginner shot-putters use predominantly their upper body muscles when throwing, whereas advanced shot putters use predominantly their leg muscles. The correlation between athletic achievements in beginner athletes’ arm strength is .83, whereas the correlation between athletic achievements in beginner athletes’ leg strength is .37. That means they’re not using their legs enough! For advanced athletes, the correlations flip flop to .73 and .87, respectively. In other words, in order for athletes to advance, they must learn how to derive maximum power from the hips and legs. 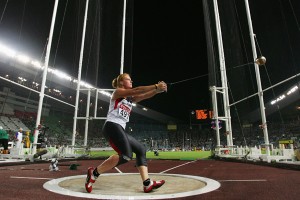 Elite golfers show greater angular velocities of trunk rotation than less-skilled golfers (Zheng et al. 2008) and higher spinal rotation is correlated with increased clubhead speed (Hellstrom 2009). Upper torso and pelvis separation (called “the X-Factor”) is a must for maximum golfing proficiency (Myers et al. 2008, Chu et al. 2010). However, when you perform rotary movements, don’t try to target the spinal muscles. You need to get the hips into the mix – for a couple different reasons. Chan et al. (2011) found that rotary motion was indeed healthy for the lumbar discs as long as end ranges were avoided. How can going to end-range lumbar rotation during explosive movements be prevented? First, ensure proper hip and thoracic spine mobility, and second, make sure the hips are strong and powerful so they’re used extensively during rotation tasks.

For this reason I recommend really trying to “feel” the glute and other hip external rotators of the rear leg working hard during standing rotational exercises, and you should even feel the hip internal rotators of the front leg assisting in the task. If you want to know which muscles act as hip external rotators and which muscles act as hip internal rotators, you need to know how much flexion is involved at the hip, as the levers change as the hip moves from a neutral position into flexion. Delp et al. (1999) examined these changing roles and found functional subdivisions of muscles and altering roles of hip rotators. 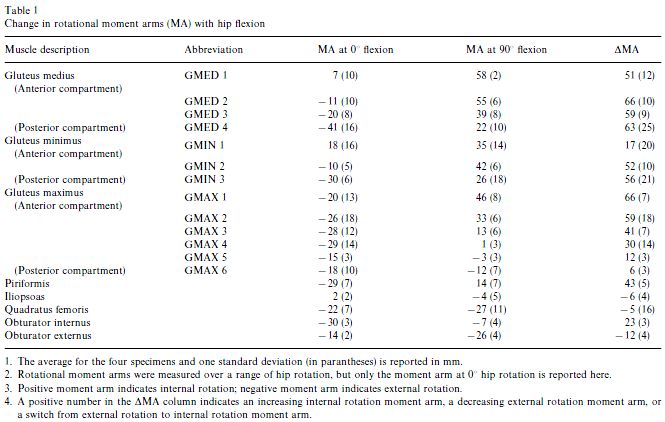 Recent research has shown that standing rotary training can improve landing mechanics in the absence of jumping exercise (Nyland et al. 2011a, Nyland et al. 2011b). Both of these studies involving a GroundForce 360, which looks pretty badass to me but I have never experimented with it.  Click on the link and check out the video. 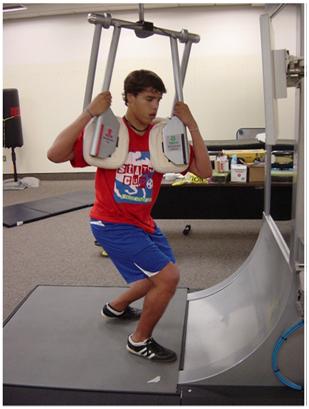 In a nutshell, proper landing mechanics require rapid hip abduction and external rotation moments (torques) about the hips in order to prevent valgus collapse. Knee valgus is characterized by hip adduction and hip internal rotation and can be quite detrimental to knee health (ie: leads to patellofemoral pain) and performance (ie: energy leaks). The studies above showed that improving neuromuscular output through rotary training led to improved landing efficiency, which is very interesting considering that no jump training was performed. This suggests that rotary training can transfer to a myriad of tasks such as jumping/landing, squatting, climbing, throwing, striking, and swinging. Hell, Louie Simmons even noticed increased deadlifting strength after using the grappler.

In a perfect world, we’d all have access to a Ground Force 360. Since this is not the case, standing rotary exercises can be performed with bands and cables to simulate various chopping and lifting motions in different positions including tall kneeling, half-kneeling, split stance, and parallel stances. Bands exercises that challenge the hips have been used quite effectively in improving golf mechanics and performance (Lephart et al. 2007). Medicine balls can be used for higher contraction velocities. Here are a few of my favorites:

Band Hip Rotation (if you do this one right, your glute activation can sore through the roof)

Rotational Medball Shotput (Tim gets his whole body into this one)

If you haven’t seen Gray Cook talk about chops and lifts, check it out below. I love listening to Gray speak – he’s so eloquent.

I definitely recommend learning chops and lifts this way as beginners lack segmental control in the spine and don’t know where to move and how much to move. Over time as this control is mastered, I recommend progressing toward some slight movement in the spine (but not much) and progression to standing stances. I like bands more than cables for hip rotations and rotary holds, but I like cables more than bands for variations of chops and lifts. Often beginner women find the band movements problematic and do better with cable rotation movements until they get stronger and can use the bands efficiently.

Hopefully this post has given you some food for thought. Most lifters do not view standing rotary work as effective full body training. This couldn’t be further from the truth, and if you get freakishly strong at these movements than you’ll know what I’m talking about. I’ve been teaching the band hip rotation to some big and strong rugby athletes here in New Zealand and they’re amazed at how weak they are initially at this movement. Within a couple of months strength sky-rockets on these movements which is very important for balanced strength.

As far as programming is concerned, I like to perform just two sets on each side for 8-12 reps, and I do this at the end of my training sessions. Sure my long segments help with rotational inertia, but whenever I see a punching bag arcade game like the one below I always test it out and I’m usually able to set the all-time record. I credit some of this to the consistent amount of rotational work that I do week in and week out. 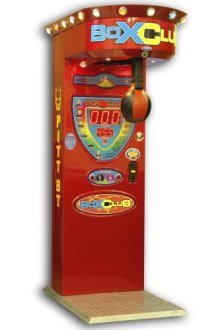