Kettlebell swings are an amazingly versatile exercise. A proficient swinger will be able to pick up squats, deadlifts, and hip thrusts very quickly due to both superior hip hinging coordination and end-range hip extension prowess. Swings can be performed with lighter loads for ultra-high reps to build muscular endurance and aerobic conditioning, and they can be performed with heavier loads for medium-to-high reps to build strength, explosive hip power, anaerobic conditioning, and even muscular shape in the posterior chain.

In a prior article, I discussed the merits of heavier kettlebell swings. Click HERE to read it. In the article, I posted the chart below which showcased the ground reaction forces (GRFs) associated with two types of swings (squat style versus hip-hinge style) with two different loads (medium and heavy).

You will also notice that the heavier loads generate greater GRFs, and that this force increase is even more pronounced in the horizontal vector.

Keep in mind that this chart is n = 1. Hopefully in time a study will emerge will a sufficient sample size, but my guess is that the results will be duplicated as it’s common biomechanical sense to me.

In a previous article, I discussed why I felt that heavy kettlebell swings should be utilized for athletic strength & conditioning. Click HERE to read that article. I mentioned that heavy kb swings would be a great exercise for improving hip power, acceleration, and speed.

Hip power is determined by multiplying hip extension torque by hip extension angular velocity. My guess is that the swing would produce greater hip power than power cleans, power snatches, or jump squats, due to the fact that the latter lifts only contain vertical components whereas the swing also contains a large horizontal component. This research has not yet been conducted as of yet.

However, the horizontal component (horizontal GRF’s) is largely regulated by hip extensor muscle force. The greater the glute and hamstring strength and power, the greater the horizontal force production potential. Recent high-quality research has shown this to be true in sprinting, that is, the glutes and hamstrings counteract the hip flexion and knee extension torques induced by gravity, motion, and ground reaction (see abstract HERE). Finally, Lake & Lauder showed in an excellent study that kb swings produced a greater impulse (impulse equals force multiplied by time) compared to squats and jump squats, indicating that they may be superior in some regards (see abstract HERE, see larger review of the study HERE).

Now that I’ve discussed GRFs, I’d like to shift the attention to muscle activation.

I asked my friend Marianne Kane, a proficient and experienced kettlebell swinger, to perform kettlebell swings with 16 kg, 28 kg, and 48kg while electrodes were place on her glutes, quads, and hamstrings and electromyographic (EMG) activity was recorded. Before the swings, maximum voluntary isometric contractions (MVICs or MVCs) were performed so that the data could be normalized to those positions (which explains how you can get over 100% activation – if the activation induced by the dynamic exercise exceeds that of the isometric exercise). The chart below showcases the results.

It is useful to examine the data in graphical form. Here is the mean muscle activity: 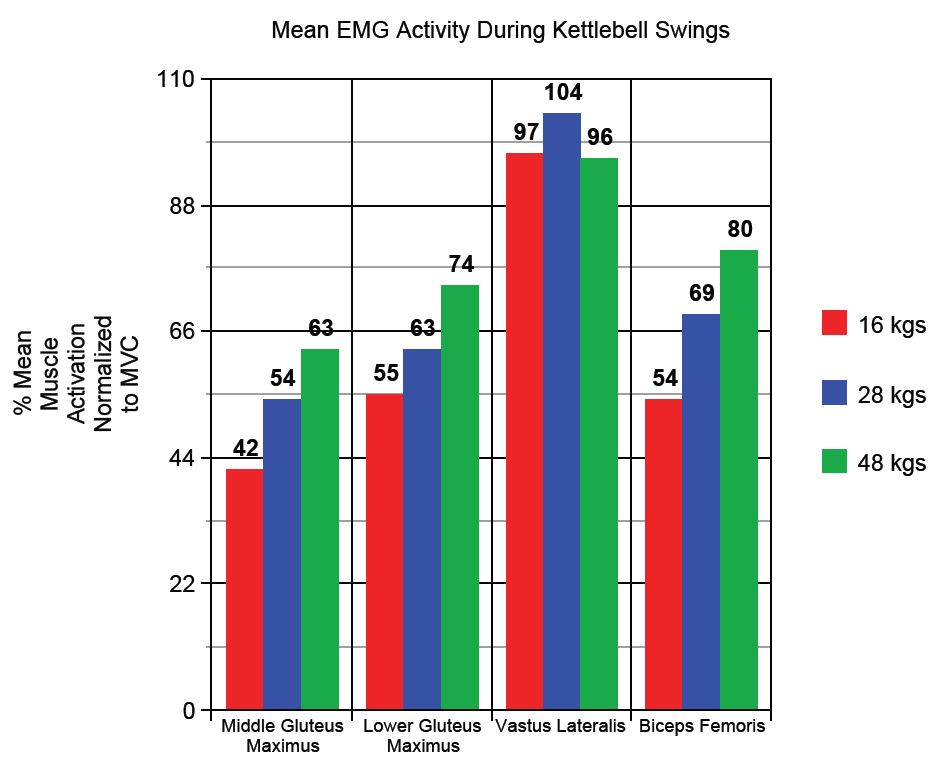 And here is the peak activity: 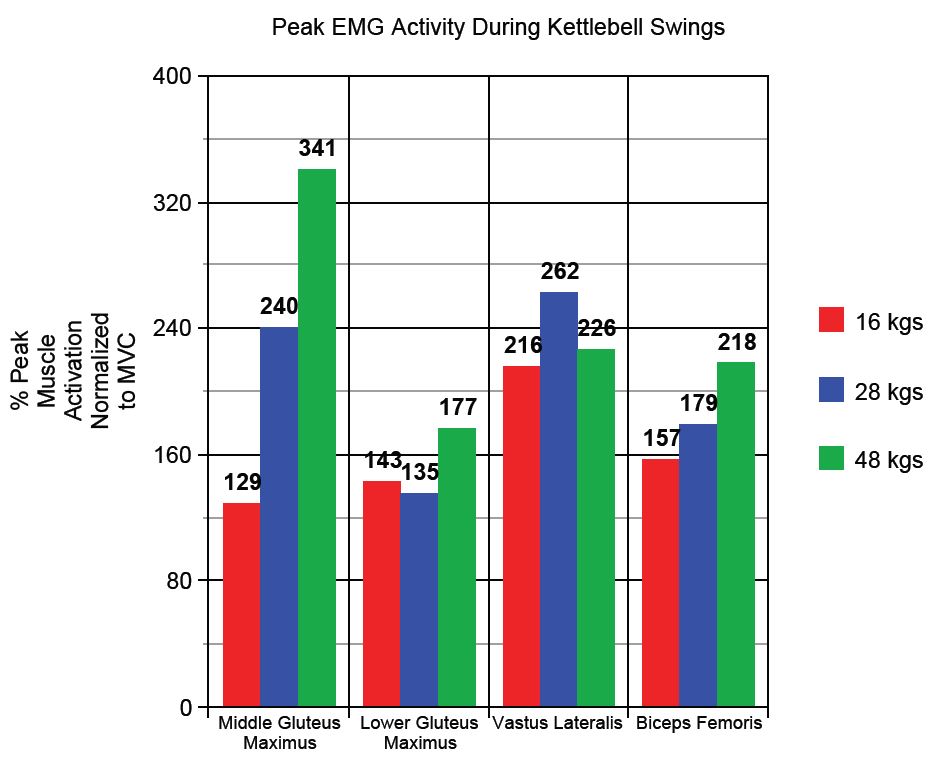 You will notice a couple things from these charts/graphs:

Keep in mind that this chart is n = 1. Hopefully in time a study will emerge will a sufficient sample size, but my guess is that the results will be duplicated as it’s common biomechanical sense to me. 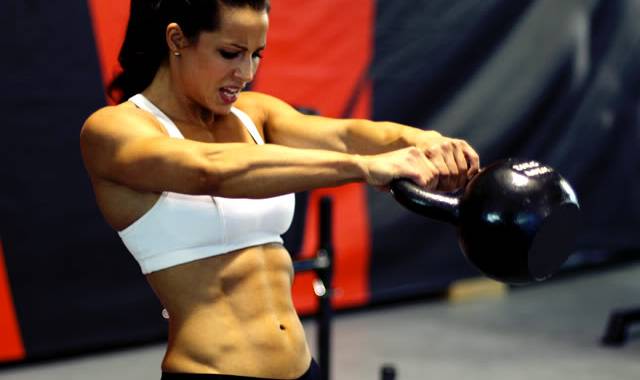 Furthermore, a sweet-spot likely exists for maximizing muscle activation as well. Having experimented with all sorts of kettlebell loads and heavy implements (such as the kettleclamp, Hungarian core blaster, and plateau buster), I can tell you that the heaviest loads possible are not optimal for kettlebell swings. For example, if I do swings with 300 lbs, my range of motion (ROM) is compromised, my power output diminishes drastically, and my hip extensors (glutes and hammies) don’t contract as forcefully. However, I don’t get anything out of swinging 16 kg kettlebells.

Do not jump into heavy swings too quickly. If you’re a beginner, you’ll likely want to first master the kettlebell deadlift and cable pull-through, then the kettlebell deadlift/swing hybrid (click HERE to see this movement), and then finally move onto swings (click HERE to see videos for kb swing form). Make sure your form is stellar with light loads before moving on to heavier loading. 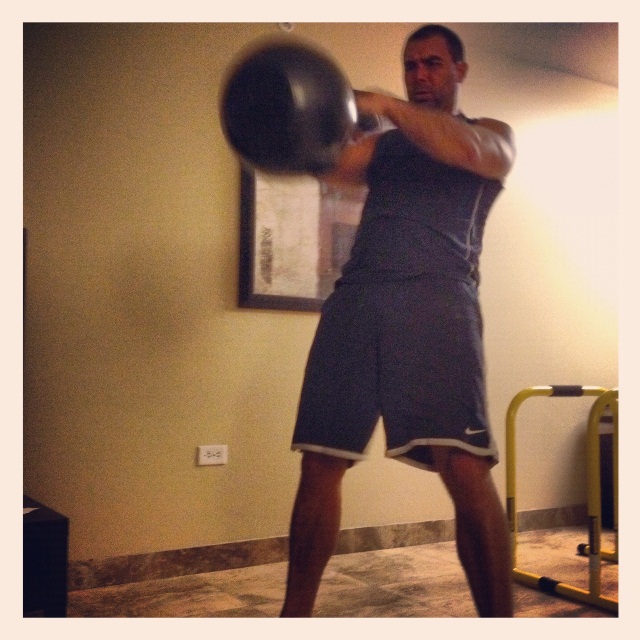