Last night, I watched my niece Gabrielle play volleyball. She’s on varsity as a junior and her games are getting more and more exciting as she advances in years. I wrote about Gaby in early 2010 HERE, and posted a video of her first training session.

Side rant: My dreams of her becoming a world class sprinter came to an end when she tried out for track & field, made the team, and was then told by her volleyball coach for her club team that she was not permitted to join track due to the time requirements involved in club volleyball. I can’t tell you how much this infuriates me, and it’s a serious problem that plagues youth sports worldwide. 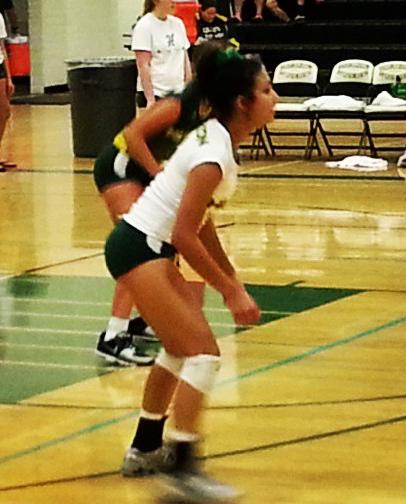 I was amazed at the power that some of the girls were able to generate, especially from the taller players who haven’t yet developed into their bodies. You see some lanky, clumsy, awkward appearing physiques, but when they spike the volleyball, they’re able to turn it on and exhibit some serious explosiveness. I found myself trying to predict the 1RM squats of the various players on the team, despite having never trained them.

Another side rant: I have seen the way Gaby’s team trains as they go to a “sport-specific” training studio that posts videos on their Facebook page and it’s just about the worst training I’ve ever seen for volleyball. There’s an art and a science to strength & conditioning, and if you’re charged with the role of getting athletes better than you should take the practice seriously.

Prescribing solely circuits involving Swiss ball exercises, jump rope, and lateral raises under the guise of “building teamwork” and “working on their stamina” without ever performing a weighted compound movement is complete B.S. and is essentially robbing the naive parents who don’t know any better. It’s also far from “sport specific” and is an injustice to sports science. What’s worse is that the owner of the facility is good friends with the head coach so the players are expected to attend the facility. And what’s even worse than all of this is that the players are unaware of their vertical leaps as it doesn’t get measured. How convenient for the crappy training facility – no accountability!

At any rate, I imagine that some of the shorter, stockier girls would be capable of full squatting 95-115 lbs, but I imagine that some of the taller, lankier girls wouldn’t be able to full squat properly with a barbell. They’d most likely need to start off with goblet squats and master the technique before graduating to a barbell. This brings me to my next point.

An Athlete Can Suck at Squatting and Still be Incredibly Powerful

As I previously mentioned, when watching the volleyball game, I saw some lanky girls who most likely couldn’t full squat 65 lbs throwing down some serious spikes. Their timing and coordination for the spike was incredible, even though their squat strength would be laughed at in most athletic circles.

This doesn’t just apply to volleyball. How much do you think the typical basketball center could full squat? I bet most couldn’t get 225 lbs. What about Usain Bolt? He probably couldn’t full squat 225 lbs (see how Usain trains HERE), yet he’s the fastest man on the planet. 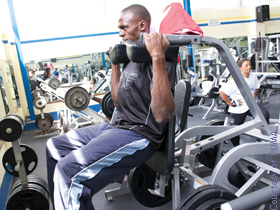 I can think of plenty of world class athletes who probably suck at squatting. Fedor Emelianenko, one of the best heavyweight MMA fighters in history, probably couldn’t squat that much, but he could knock your head off. I’m thinking back to guys like Jerry Rice, Carl Lewis, and LeBron James and pondering their full squatting prowess. 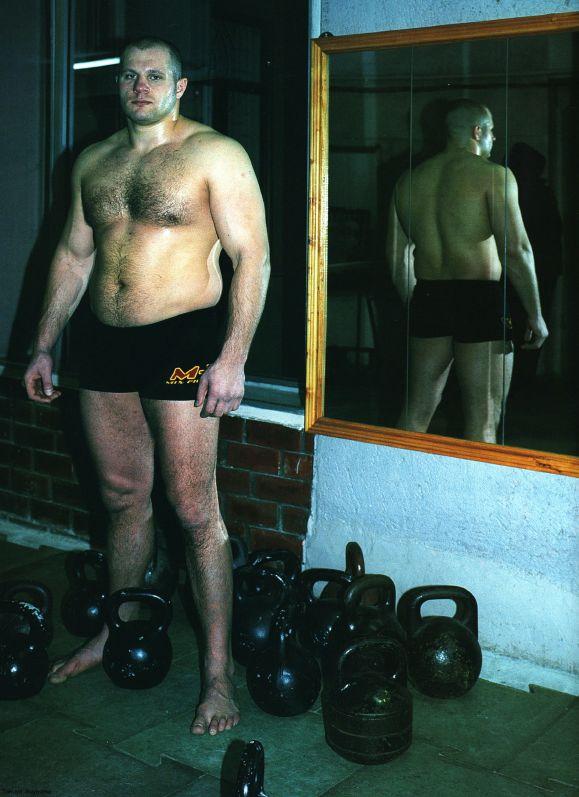 Fedor probably couldn’t squat much, but he could undoubtedly swing the house!

I’ve heard various claims of athletes squatting a lot of weight, such as Kobe Bryant using over 400 lbs (but this was a half-squat), Ben Johnson busting out 600 lbs for 6 reps (Charlie Francis says this was a half-squat in his book), and various other reports. But videos of form are lacking so I always remain skeptical of depth. I also realize that looks can be deceiving and sometimes a lifter’s squat strength can take you by surprise. The point is, you can be incredibly powerful, fast, and explosive without having a crazy squat.

Years back I trained a guy named Kenny Dobbs who had a 48″ vertical leap and could touch his nose to the basketball rim but could only full squat around 115 lbs. And yet he’s one of the best dunkers on the planet.

Now, I can think of some athletes who had great builds for squats. Guys like Barry Sanders, Herschel Walker, and Mike Tyson could probably have worked their way up to 500 lb full squats within 6 months if they worked with a qualified strength coach. But weight training should never out-prioritize field performance, so this wouldn’t be necessary or even optimal as there becomes a point where risks can outweigh rewards.

Squats and Performance Aren’t Well Correlated With All Athletes

As you can see, squats and athletic performance are not well correlated. The best players aren’t the best squatters, far from it.

Here would be my prediction if you were very strict with form and made the various athletes actually squat as deep as they could go, ass-to-grass (sure I’m assuming that they have the ankle/hip mobility to do so but this is just hypothetical):

Of course, I could be way off the mark here as I never trained these individuals or saw them train. But I do wonder about these things. If Ben performed 600 lb half-squats, then I imagine this would equate to 455 lb full squats.

I’d like to hear other coaches’ opinions about these athletes’ squat strength, and if any readers have knowledge of their squat strength, or impressive feats of strength with pro athletes for that matter, then please chime in in the comments section below.

Nevertheless, Squats are One of the Absolute Best Things You Can Do for Most Athletes, Especially in Their Earlier Years of Training

The point of this article isn’t to dismiss the squat. It’s a staple in strength & conditioning for great reason and it’s one of my favorite exercises to perform and prescribe.

Furthermore, the squat has been used in numerous training studies in the literature with great success for developing strength, vertical jump, acceleration, rate of force development, and leg mass – probably 50-100 studies at this point in time. Interestingly, it doesn’t transfer well to agility performance.

Just because an athlete sucks at the squat doesn’t mean that he or she shouldn’t perform it. The squat is a staple movement pattern and all athletes should employ some type of squat pattern that is determined by their anatomy, injury history, and goals. The lanky high school female volleyball players should be squatting. Some athletes such as basketball centers should stick to high box squats with vertical tibias, and perhaps light goblet squats in the warm-up. Other athletes should stick to parallel front squats or perhaps back squats with chains. Hell, some athletes should just stick to unilateral squat variations such as the Bulgarian split squat, but this is still squatting.

What’s the Point of the Article?

The point of this article is actually two-fold:

1. To help coaches consider the drawbacks of correlational studies

If you were looking solely at correlations between squat strength and athleticism, then you’d likely rate the squat low on the totem pole in terms of training prioritization.

2. To help coaches consider the superiority of training studies

To quote the brilliant physicist Richard Feynman, “if it disagrees with experiments, it’s wrong.” Theories in sports science can be esoteric and exotic, but if they don’t line up with training studies, then they’re just plain pseudoscience. The squat, especially in early training years, will improve an athlete’s acceleration and vertical jump while developing leg mass and core stability.

If you’re a coach, maximize your understanding of squat variations and employ some type of squat your athletes. Just don’t become obsessed with chasing records and piling on the plates. Taking an athlete who wasn’t built for squatting from 135 lbs to 225 lbs will enhance his athleticism, but forcing him to perform 315 lbs with crappy form could sideline him and greatly harm his career. Strength coach Anthony Mychal addressed much of this nicely in THIS article.

Thoughts are welcome and appreciated!