Christophe LeMaitre is one fast sumbitch. As a matter of fact, he’s the fastest Caucasian in the history of track & field. At only 21 years of age, he’s the only Caucasian to officially run 100 meters in less than 10 seconds (he actually did so at age 20). To date, 80 sprinters have broken the 10-second barrier, but only one of them is Caucasian. Christophe has run the 100m in 9.92 seconds and the 200m in 19.8 seconds, and he’s faster than Asafa Powell and Tyson Gay (and possibly Usain Bolt) were when they were 20 years old.

Over the years, many theories have been proposed as to what limits acceleration, maximal speed, and 100m sprint performance. Is absolute force what’s truly important, or does the direction of force application matter? Do increased vertical force and the generation of high levels of stiffness get you on and off the ground more quickly? Is horizontal force more important to help push you further down the track? Is the resultant ground reaction force vector (combination of vertical and horizontal forces) critical, or is it more complicated? Is the “force” portion of the power formula (P = FV) more important than the “velocity” portion, or vice versa? Do faster sprinters have lower contact times? What about stride lengths and stride rates? Do faster sprinters have higher body masses, thereby allowing them to produce greater force? Do they have longer limbs than their slower counterparts? What are the most important “sprint” muscles?

These are just some of the questions that sports scientists and track & field coaches are trying to figure out, and French researcher JB Morin is leading the way with some amazing research over the past several years. 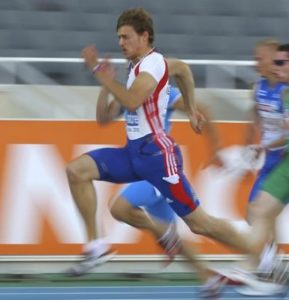 Recently, Morin and colleagues decided to analyze LeMaitre and other sprinters in an attempt to figure out what makes LeMaitre faster than his competitors. Here’s a LINK to the abstract. This study is one of the coolest studies I’ve ever read and I commend the researchers for putting together such a comprehensive study in order to advance our understanding of sprint biomechanics. Here’s what they did:

The researchers examined 13 subjects. Nine of them were P.E. students who had been exercising regularly (including sprinting) over the past six months but were not sprint specialists. Three of them were National level sprinters in France. And one was Christophe LeMaitre; the fastest dude in all of Europe (in the world top 4 in 100 and 200m at the 2011 World Championships in Daegu). Though many studies in the literature have examined high-level sprinters, very few have experimentally studied a world-class sprinter, which makes this study highly valuable.

This particular paper has contributed very heavily to the body of knowledge. In fact, it took me a few reads to adequately understand all of the findings due to the physics and mathematics involved in the paper. Since there were so many findings, I’ll just list them in bullet-point fashion:

The theoretical maximum horizontal force that sprinters could produce was not correlated with any of the performance variables, whereas the theoretical maximum horizontal velocity that sprinters could achieve was significantly correlated with all performance variables. In other words, a velocity-oriented power profile seems critical to speed and 100m sprint performance, not a force-oriented power profile.

I was able to correspond with JB Morin and attain some very interesting information that cannot be found in the published study (including the detailed chart below). 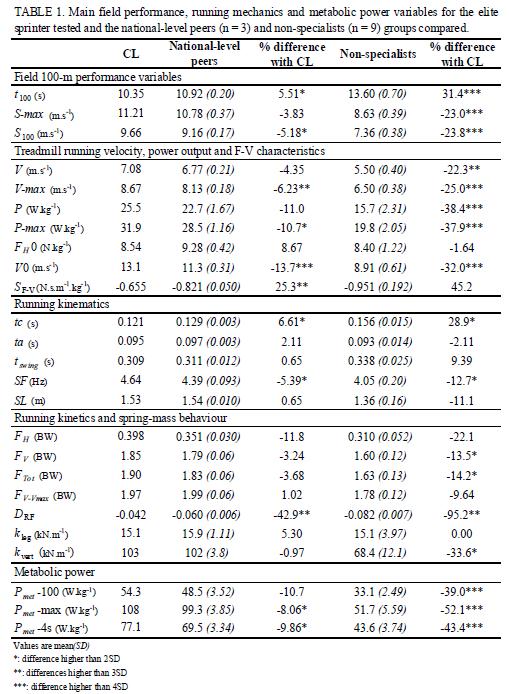 *Metabolic power was estimated following the methods proposed by di Prampero in 2005. Click HERE for a link to that paper.

The only main limitation of the study is that it was conducted on a torque treadmill. This type of treadmill does have a different “feel” to it compared to sprinting on a track, as it involves more forward lean. However, treadmill sprint times and 100-m performances were significantly correlated to track field times (the fastest runners on the track appear to be the fastest runners on the treadmill, and the slowest on the track appear to be the slowest on the treadmill). Moreover, the treadmill allows for the collection of highly meaningful data including the GRFs over the entire sprint run (records GRFs for every single step). This data collection allows for the calculation of RFs and the index of force application, which seems to be the most highly correlated factor relating to maximal speed. This is currently the only way to get such data, until fully instrumented 100-m tracks are made available…

What Future Research Needs to Determine

Like all excellent studies, this paper should lead to further research for various questions, including:

What makes Christophe Lemaitre so damn fast? It isn’t vertical force, total force, resultant force, stiffness, step length, or theoretical maximum horizontal force. His effectiveness of force application onto the ground (quantified through Morin et al.’s index of force application: the slope of the line of best fit formed with the plots of the ratio of horizontal to total force for each step of the sprint) is much higher than his peers. He produces much higher relative net horizontal force and power throughout the sprint. The velocity component of his force-velocity profile is much higher than his peers. And his step rate is higher and contact time is lower than his peers. This shows that throughout the race and especially at high speeds, he continues to produce high levels of net horizontal force.