By Bret Contreras May 13, 2012 Low Back Reconditioning, Sport Specific Training

A couple of awesome studies have recently emerged and I want to alert my fitness friends about the news. One of the article pertains to foam rolling, and the other pertains to breathing training. Many folks in the S&C industries have been skeptical about these methods, and finally we have some good support for their inclusion in our programs. Bravo to some of my colleagues for being “ahead of the research.”

First off, I’d like to mention that THIS ARTICLE (the link takes you to the abstract – it’s not on Pubmed yet), just published ahead of print, includes an excellent write-up on how foam rolling is proposed to work. Here’s a brief excerpt:

Myofascial release (MFR) therapy is a manual therapy technique developed by John F. Barnes (5), to help reduce restrictive barriers or fibrous adhesions seen between layers of fascial tissue. A new technique of MFR termed self-induced myofascial release (SMR) has become of increasingly common practice for treating soft-tissue restrictions. SMR works under the same principles as myofascial release. The difference between the two techniques is that instead of a therapist providing manual therapy to the soft-tissue, an individual uses their own body mass on a foam roller to exert pressure on the soft-tissue. The SMR technique involves small undulations back and forth over a dense foam roller, starting at the proximal portion of the muscle, working down to the distal portion of the muscle or vice versa (28). The small undulations place direct and sweeping pressure on the soft-tissue, stretching the tissue and generating friction between the soft-tissue of the body and the foam roller. The friction generated from the undulations causes warming of the fascia, promoting the fascia to take on a more fluid-like form (known as the thixotropic property of the fascia), breaking up fibrous adhesions between the layers of fascia and restoring soft-tissue extensibility (32).

The authors hypothesized that foam rolling would indeed increase joint ROM, but that it would also decrease muscle activation and force due to prior research they’d seen involving the effects of massage on EMG and spinal motoneuron excitability. The authors were surprisingly wrong about their second hypothesis.

The authors measured maximum knee extensor force production, rate of force development (RFD), rectus femoris muscle activation via EMG, and knee flexion ROM when in a half-kneeling lunge position with the rear hip extended (sort of like what’s seen in the position shown in the video below).

This is the very first peer-reviewed study that examined the effects of foam rolling. Here’s what they found:

Obviously this is only one study and more research is needed, but to me this lends a TON of credibility to what the best practitioners already knew instinctively; which is that foam rolling enhances ROM without diminishing neuromuscular performance.

I’d like to see research showing the effects of foam rolling on subsequent sprint performance.

Somewhere out there, Mike Boyle is doing the Carlton dance.

On a personal note, my favorite foam roller is the Rumble Roller (no affiliate link).

There have not been many studies in the literature showing how posture can be improved, though many coaches and therapists have their theories. Lately, breathing training has become more popular in the industry. In particular, diaphragmatic breathing has received a lot of attention. THIS STUDY (click to download the full paper) recently emerged showing that breathing into a SpiroTiger (no affiliate link) improves posture and trunk flexion strength. Here’s a SpiroTiger in action:

This is the first study of its kind to be conducted. Here’s what the authors found:

The authors offered some explanation as to the findings in this excerpt:

Abe et al (32) reported that the transverse abdominal muscle is the most powerful in the abdominal muscle group with respect to respiration. The transverse abdominal muscle may have been specifically targeted in this exercise. This important muscle is a keylocal stabilizer. Contraction of the transverse abdominis increases intra-abdominal pressure, which leads to lumbar straightening (33). In addition, a rise in intra-abdominal pressure presses the rib cage upward and effectively allows the extension of the thoracic vertebrae (34). In addition, we attribute the decrease of thoracic curvatures to a stretching effect on the thorax. In a previous study, Izumizaki et al (35) reported that thoracic capacity and rib-cage movement were changed by thixotropy, which is the exercise of maximal expiration from maximum inspiration. The stiffness of the rib cage leads to thoracic kyphosis (3). In this study, repetitive deep breathing resolved the stiffness of the ribcage and straightened thoracic kyphosis. This process maybe responsible for altering the spinal curvature.

I’d like to see this study duplicated…I’m a bit skeptical. The study design and findings looked legit though. If this is indeed true, this is huge.

It suggests that spinal posture can be improved by simply training the breathing muscles! It is not easy to alter spinal posture, so this could become very important over time if future studies repeat the findings. And the study duration was only 6 weeks long; which is short for a training study.

The authors didn’t pay specific mention to the diaphragm, which is incredibly important and could explain some of the findings through various mechanisms. 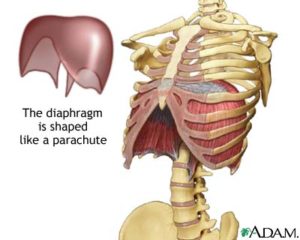 Perhaps the improved posture that strength coaches and personal trainers see with their athletes and clients isn’t so much attributable to increased trunk strength but inner unit strength instead.

Furthermore, the study shows that you can increase trunk flexion strength by 10% without even training trunk flexion!

I’d like to see the effects of different protocols on posture and different types of strength. For example, breathing into the SpiroTiger for 10 sets of 30 seconds five times per week for six weeks and its effects on posture, pulmonary function, IAP capabilities, and isometric deadlift strength.