Here’s the deal. At The Glute Lab, we have 3 primary workers (Andrew Vigotsky is a full-time student at ASU, which leaves yours truly, Andrew Serrano, and Joey Percia), a garage gym, a force plate, EMG, and video capture.

I haven’t seen any researchers examine these effects or utilize this design, and it would make for an excellent study (preferably with competitive powerlifters as subjects). 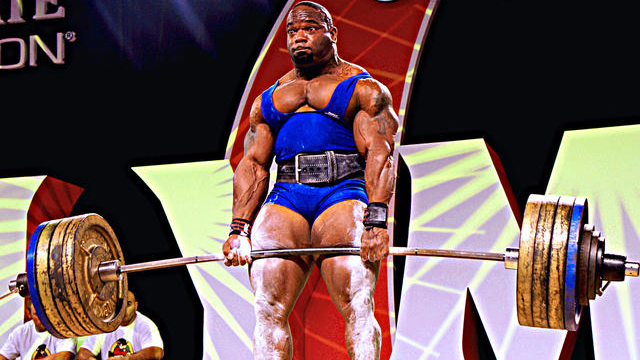 As you can see in the pic, we simply loaded the bar slightly heavier than our 1RM’s so that the bar didn’t budge. The bottom pull was performed off the floor (actually on some plywood so that the bar was level with the force plate), while the mid and top pulls were performed with the bar resting in the squat stands.

Here are the results: 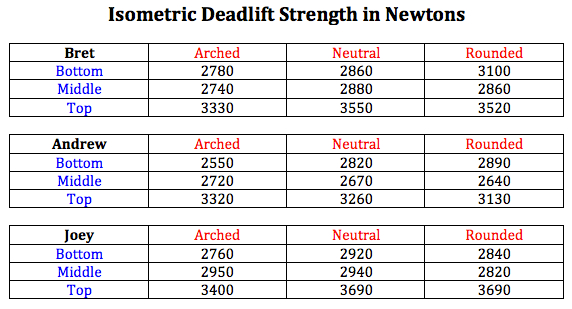 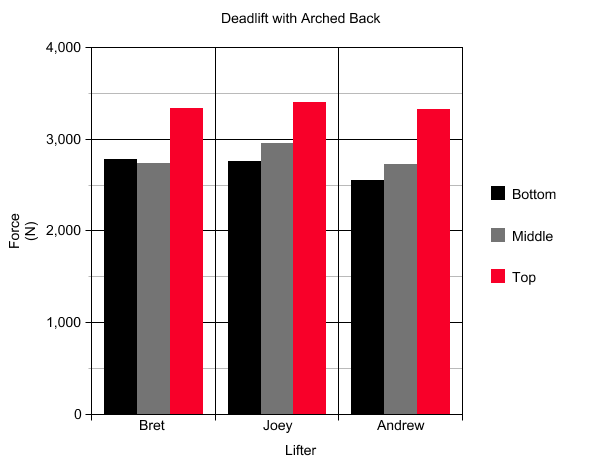 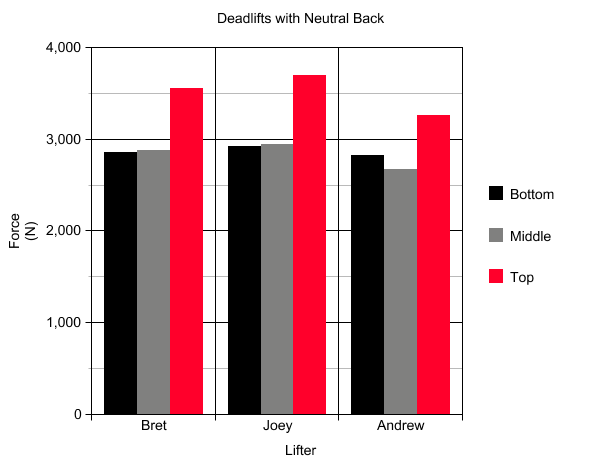 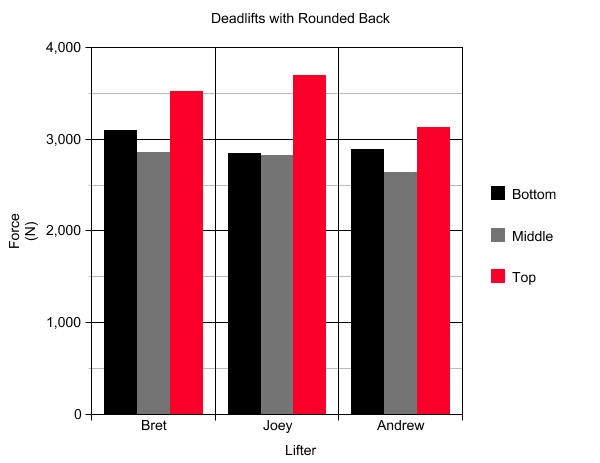 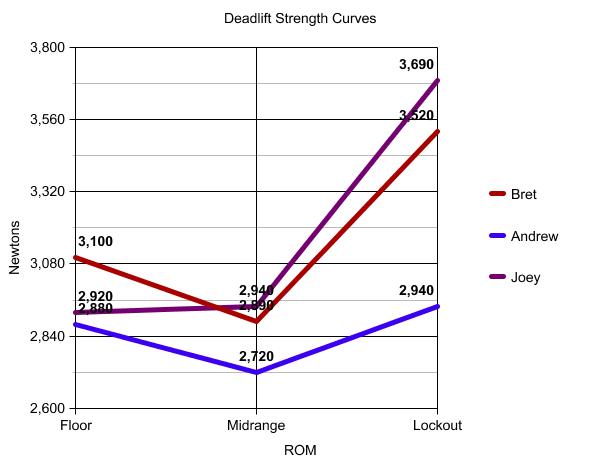 As you can see, when pulling from the floor (bottom position), Joey is strongest in neutral, whereas Andrew and I are strongest when rounded. Hence, this explains why we round our backs when the weight gets heavy enough or the reps approach failure. This also explains why Joey keeps such strict form – he’s strongest in this position. My roundback strength was considerably higher than my neutral strength off the floor. All three of us were weakest when overarched. Andrew’s overarched strength was dramatically weaker than his neutral strength off the floor.

A final interesting observation is to examine the mechanical advantage at lockout – if you notice, Joey and I are around 20% stronger at the top compared to off the floor (with Andrew exhibiting less of a strength curve throughout the deadlift ROM). Joey is the only lifter out of the three of us who shows a purely ascending strength curve in that he gets stronger as the movement rises; Andrew and I are both weaker in midrange compared to off the floor.

Examining a particular lifter’s isometric deadlift strength at varying ranges of motion and with varying postures can help explain how their form would tend to break down. It can also help a coach or lifter predict weak points and identify regions that could benefit from additional strengthening. It should not be assumed entirely that isometric strength mimics dynamic strength. Moreover, we found that it’s hard to know if you’re truly exerting maximal strength in isometric settings as we rarely practice this demonstration of strength in the gym.

The safest deadlift form is the neutral position. If you’re an athlete or general lifter, then this is the wisest form to utilize. However, if you’ve ever attended any powerlifting events, then you know that probably greater than 50% of the lifters pull with a rounded back to some degree, since their goals are to maximize performance.

Spinal injuries are very common with the deadlift. In fact, the deadlift is probably the most dangerous lift in the gym, so you want to pay close attention to posture. Some lifters hurt themselves the moment they get out of neutral, whereas other lifters have more wiggle room and can tolerate some rounding or overarching. However, nearly all lifters get hurt if they consistently exhibit excessive rounding or overarching during the deadlift, since more and more stress to the spinal tissues is elicited with increasing spinal range of motion. So if you’re going to initiate your deadlift in non-neutral postures, make sure your lumbar flexion or lumbar hyperextension is limited and doesn’t come anywhere near end-range. Finally, thoracic rounding is much better tolerated by lifters than lumbar rounding, so learn to lock up the low back and bend in the upper back if need-be.

Obviously, this experiment only featured 3 case-series and should not be considered a scientific study – that would require more subjects.

An overarched spine might look sexy in pictures but it’s not always the strongest deadlift posture nor is it the safest.

How to Strip Plates Off the Bar After Heavy Deadlifts

How to Strip Plates Off the Bar After Heavy Deadlifts