Strength Goals: Don’t Be Afraid to Abandon Them

Throughout my lifting career I’ve given much thought to the concept of strength-related genetic limits. I believe that it’s very important to strive for continued strength gains, even if training for solely aesthetics. However, it’s incredibly important to use good form, be realistic, and pay attention to biofeedback. I’ll expound upon each of these.

Around five years ago there was this jackass that used to post on various Bodybuilding forums. He went by the name Diesel Weasel, and his form was probably the most atrocious of all time. Here are a few of his best lifts:

You may be wondering what the hell happened to this guy? How did his form get so bad?  I’ve seen this happen to many lifters over the years. Their form starts off great when they learn the lifts, but every six months or so their form gets markedly worse. Range of motion shortens and joints buckle, but the weight increases persist. Within two years of learning how to lift, form has deteriorated so badly that there’s no longer any semblance of good form on any exercise in the lifter’s arsenal.

Many novices get spoiled during their first six months of lifting. They reap their beginner gains and think that these rapid strength gains are the norm. They get accustomed to going up 5 to 10 lbs per week on their big lifts, and they’re too stubborn to stop increasing loads each week when form starts suffering.

These lifters learn that the human body is pretty resilient, and the body’s ligaments can become very strong. In the case of the “lifter” above, he has trained his body to become very good at:

1. Relying on his spinal ligaments for passive force contribution

2. Using his erector spinae as prime movers rather than stabilizers

While the fact that he has trained his body to deal with these loads is actually quite intriguing from a biomechanical standpoint, I find it comical that even this guy’s bent over row and curl form is piss-poor as evidenced in video number three. I suspect that if you trained with this guy you’d see that even if he performed exercises like lying l-flies and YTML’s, he’d use too much weight and heave the weight around with horrendous form. In fact you can go to this Youtube page and see all kinds of awful videos…the clean & front squat and snatch videos are equally as hideous.

It is quite apparent from his physique that he’s not working his muscles much or they’d undergo some hypertrophy.

I’m all for getting strong, but not at the expense of form breakdown to this degree. On maximum lifts the most your form should break down is 10%. Any more than that and you’re skating on thin ice. Maxing out with good form is already risky; you don’t need to make it riskier. This weasel’s form is breaking down more like 100%, which is ten times the amount I recommend!

To further illustrate what I alluded to earlier, I figure that pictures would do a better job of explaining what I’m talking about regarding form. I’m only including pictures of maximum lifts, as it’s easy to use good form with 135 lbs like most people do on their Youtube videos. Maxing is a different story. Here’s my friend Neghar “Poetry in Motion” Fonooni performing a 240 lb deadlift.

Here are some pictures of the knee, hip, and spine angles taken right after the bar leaves the ground for Weasel and Neghar. These angles help determine which muscles and which structures are creating force to perform the lift.

4. Neghar’s badass socks (you have to wait for the lockout to see this so watch the video)

We all vary considerable in terms of strength-related genetics. Anthropometry and bony levers and tendon insertion points are critical pieces of the strength puzzle. The ability to gain physiological cross-sectional area (a type of measurement that’s more related to force production than regular cross-sectional area because it takes into consideration the pennation angle of the fibers) is vital as well, as is the ability to increase connective tissue strength for increased force transmission. These factors are very reliant on genetics, and while sound training principles can take us very far, there’s only so far we can go.

Here’s another way of looking at it. I know of three different “experts” in the strength training world who aspire to deadlift 600 lbs. The first is Tony Gentilcore, the second is Matt Perryman, and the third is some jerk named Bret Contreras. And despite the fact that we’ve all publicly announced (see links) our goals, we’re all still waiting to achieve the elusive feat. Though Tony is the closest of the three of us, he had a very unfair advantage with his buddy pumping him up and throwing air strikes, which has been shown in the literature to add 20 lbs to your max.

I’m sure that if each of us decided to pack on 30 lbs in the next 6 weeks we’d achieve the 600 lb deadlift, but our physiques would go to complete crap. Getting strong is easy, but getting strong while staying lean is a different story, especially if you’re natural and don’t use any performance-enhancing substances.

Are there some secret exercises that we’re not doing or some secret program that would take us to the promise-land? Perhaps so, but the three of us have been around the block. We’ve tried all types of systems and exercises. While it’s important to not give up on your goals, it’s also important to be realistic and not try to force anything.

Every time I’ve gotten close to a 600 lb deadlift, I ended up hurting myself  or something comes up that causes me to lose strength. The same can be said for Tony and Matt I believe. What happens is that we get really close, and all of a sudden we suffer an erector strain or the like, or we get busy and our strength diminishes, or even worse (in my case) we tear a biceps tendon.

When you approach your “genetic limit,” training becomes much more dangerous and it becomes more difficult to maintain this maximum strength. In theory we’d all keep getting stronger year in, year out, but this is not always the case. Some years certain lifts go up while other stagnate, and the following year it may flip flop. Strength gains often work in mysterious ways.

Every time I’ve hurt myself, I’m able to look back and realize that I should have known better. Though hindsight is always 20/20, I’ve learned very much from my injuries over the years; enough to know that your body dishes out warning signs, and you’d be very wise to get in-tune with your body’s red flagging systems. If your low back is feeling dodgy, don’t squat or deadlift. Instead, do some Bulgarian split squats or high step ups and some hip thrusts, back extensions, or reverse hypers. You can always train around injuries and live to lift another week. If your adductors feel like they’re going to tear, do some narrow stance, high box squats and rack pulls. If your knees are a bit achy do some Anderson Zercher squats and good mornings. And don’t be obsessed with the weight!

As long as you keep your core stable then you’re not going to hurt yourself. You can be extra strict on good mornings and Zerchers and get an amazing workout.

When I train athletes, I try to let the chips fall where they may in terms of strength development. Some guys can build up to a 600 lb squat, deadlift, or hip thrust without compromising their explosive power. Some never make it to 400 lbs on anything. As long as form stays solid and you’re not focusing on maximal strength at the expense of other qualities such as explosive and reactive strength, then all is well. However, if you have a particular goal in mind and you try to force strength upon an athlete, you’re stumbling onto a slippery slope.

Of course in athletic training periodization is used quite often. There are times when you focus more on max strength than others. But right now I’m talking about the majority of training focus.

Sure you can utilize certain powerlifting techniques to build their max strength and you can skew their programming to allow this strength development to occur, but the athlete will probably not get better at their sport, will likely suffer in terms of rate of force development, and will be much more likely to experience a training-related injury. I’m big on maximal strength for athletes, but only in proper context of a well-rounded program, which includes proper attention to explosive lifts, plyos, sprints, agility work, ballistics, towing, and mobility work.

While I’m far from a sissy and I wouldn’t want any lifters to cop-out and use the “genetic-limit” excuse when they have plenty of room in the tank for continued strength gains, you need to have a proper outlook. Do not let your form break down more than 10% on maximum lifts, don’t make ridiculous goals that aren’t within realistic reach, and listen to your body’s inherent signalling system and adjust accordingly. And if you notice that you’ve hurt yourself three times in trying to reach a particular strength-related goal, don’t be afraid to walk away from the goal. Find happiness in healthy, pain-free lifting and make sure your lifting looks athletic. 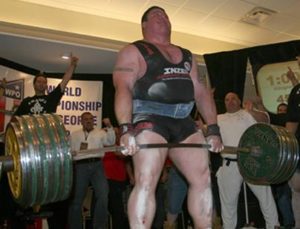 Deal With it, You’re Probably Not the Next Bolton

Free 52 Glute Myths and a Program to Come

Free 52 Glute Myths and a Program to Come