Earlier in the week I posted a scientific-laden article on the glutes. This blog is about marrying the most cutting edge sports science, biomechanical, and physiological knowledge with the most up-to-date, practical, real world methods. So today I’d like to counter the scientific article with a practical-laden article.

I’ve been doing a lot of personal training lately, working with newbies as well as advanced lifters.  I’m glad that the members of the gym that I frequent in Tempe (Revolution Training) are starting to inquire more about glute training and implement more glute bridges, hip thrusts, rounded back extensions, and band seated abductions, which is a great thing indeed.

Working with powerlifters is a blast, but I will tell you that just because someone can squat or deadlift 500 lbs does not mean that they have great glute activation or strong glutes. A couple of 500 lb lifters had to start off with bodyweight hip thrusts as their glutes weren’t strong enough to use loading yet. This isn’t the case with Mike, the lifter I’m featuring below, however. His glutes are already solid as a rock,  but they still have room for improvement.

Today I’ll provide a couple of case studies from which you can take away some valuable points.

In early July, I mentioned in a random thoughts post that my girlfriend Diana was starting school and had very limited in time. My solution was to have her perform 1 set to failure of back squats, conventional deadlifts, and barbell glute bridges each workout, all with 135 lbs. These workouts were to be performed 5-7 days apart. She started off performing 5 and 6 reps, and in five weeks is already performing 20 reps.

When you do HIT Training (not to be confused with HIIT training) like this, you get really good at pushing yourself with a single set. It’s not the best training methodology out there for strength and hypertrophy, but if you only have twenty minutes to train once per week, you won’t find anything better. I wrote about this style of programming 3 years ago HERE.

Sure she skimps on depth on some of the squat reps, and sure she could have better-used the glutes to lockout the deadlifts, but nevertheless this is damn impressive for a 118 pound woman. She’s actually way stronger at hip thrusts than she is at barbell glute bridges, which I’m not satisfied with. So I’m going to keep prescribing her bb glute bridges.

Now that she’s achieved the 20-rep squat and deadlift with greater than bodyweight, I’m actually going to switch up her training. Even though it’s working incredibly well for strength purposes, I can do better for physique purposes. I’ll keep you updated.

Mike Peltz is a total badass. As a 198 lb raw and natural powerlifter, he can squat 540, bench 386, and deadlift 645 (1571 total). He wants to pull 700 lbs in November, but right now, as you’ll see in the video, he can’t quite lockout 675 as his glutes aren’t yet strong enough in end-range hip extension and posterior pelvic tilt to do so. We’re working on improving his grip strength and glute strength to enable the mammoth 700 lb pull in 3 months. I truly believe that if he sticks to the plan, it will happen.

Mike already has very strong glutes, but they’re underpotentialized since he hasn’t been doing any hip thrusts or rounded back extensions. In just two sessions spanning one week, he can already tell that his glutes are growing, and he’s never felt such an incredible burn and cramping in his glutes before doing these movements.

Mike has relied heavily on his incredible leg strength to blast his way off the floor in the deadlift. But when you’re trying to pull more than 150 lbs over your squat, you need more than just leg strength. And if your legs are locked out up top and your upper back is rounded (as in the case of many powerlifters’ deadlifts), then you better have some strong ass glutes to roll the torso up and push the hips forward. I’ll keep you updated on this too!

I hope you enjoy the case studies! 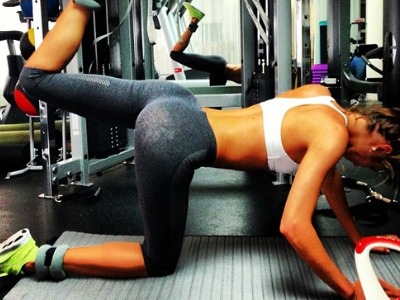