Being The Glute Guy‘s girlfriend has its drawbacks. My fiancee Diana constantly finds herself serving as a guinea pig when I want to test out a new hypothesis. In September of 2013, I shared with you The Hip Thrust Only Experiment, where I altered Diana’s training from a routine focused on squats and deadlifts to a routine focused on hip thrusts. The results? No weight change (which was to be expected since her diet didn’t change), no change in hip or thigh measurements (I predicted greater hip size and lesser thigh size, but it was only a 6-week experiment and she had been doing hip thrusts during her powerlifting training), and a reduction in waist circumference (presumably due to less erector spinae activation). This was a cool experiment, since it showed that it is indeed possible to maintain glute size if one drops out squats and deadlifts and keeps hammering hip thrusts. 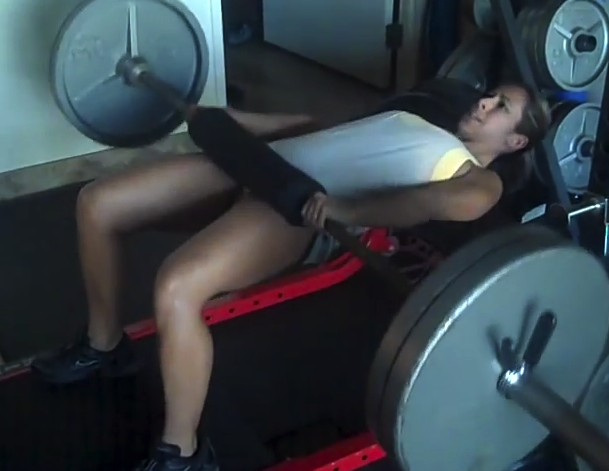 Recently, I decided to conduct another informal n=1 experiment. For the past five months, Diana has been away – her clinical rotations for nurse anesthesia school are scattered across the United States. Due to her travels, she hasn’t been able to train with me. She also doesn’t have a gym membership, so she hadn’t been doing any weight training, just jogging, hiking, and some bodyweight squats and single leg hip thrusts twice per week when she jogged. Six weeks ago, we were reunited for our friends’ wedding, and to my dismay I saw that her butt had shrunken significantly. Diana was the one to point this out, and she asked me what she could do to maintain her glute size since she hates losing her booty. I wish I’d taken measurements at this time, but I didn’t have access to a tape measure. 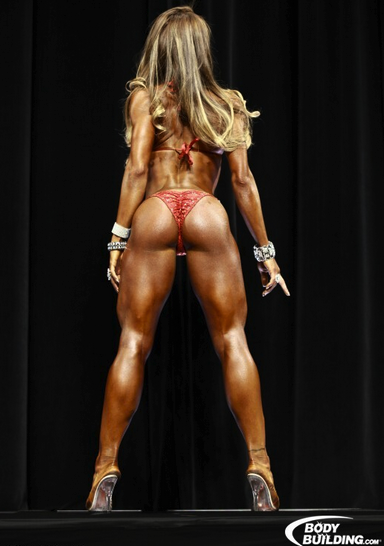 I advised her to just start doing Jane Fonda style exercise everyday. Some of you will recall that my friend Nathalia Melo trains her glutes almost daily, so I was eager to see how this strategy would pan out. Keep in mind that Diana doesn’t have any access to weights, so I told her to simply alternate between a bunch of floor glute exercises, spending around 20 minutes per day targeting the glutes. She decided to superset her training, performing one set of each of the following around exercises 5 days per week (it takes her around 20 total minutes to complete):

Note that the “A” and “B” denote supersets. Say you’re supersetting single leg glute bridges with quadruped hip extensions. You’d perform 30 reps of single leg glute bridges with the right leg, then 30 reps of quadruped hip extensions with the right leg without resting, then repeat with the left leg. Around 2-3 minutes of rest is taken between each set or superset.

I’m currently visiting her in Montana, and I’m astonished at the rapid results. In just six weeks, her butt is markedly bigger and rounder. If I had to guess, I’d say that she’s easily put on 1-1.5 inches in this short time-frame (keep in mind that she has a muscle memory effect going on due to her prior training). In fact, her butt is almost back to full size just from doing high rep Jane Fonda exercise. The largest her hips have ever been is 37.5″, and this is when she was squatting 135 x 20 reps, deadlifting 135 x 20 reps, and glute bridging 135 x 20 reps (she could also squat 225 lbs for 1 rep, deadlift 265 lbs for 1 rep, and hip thrust 275 x 12 reps). As you can see, her glutes have reclaimed their size from high rep basic bodyweight exercises performed in the supine, side-lying, and quadruped positions. Not only that, her waist is down an inch (presumably due to the lack of erector and abdominal activation). Here is how her measurements have changed over the past year and a half.

After my PhD is completed, I would love to conduct a study comparing the effects of 1) powerlifting style training (primarily squats and deadlifts twice per week), 2) Jane Fonda style training (high rep floor work five times per week), and 3) Bret Contreras style glute training (heavy, medium, and light variations of hip thrusts, squats, deads, back extensions, lunges, and lateral band work four times per week) on glute hypertrophy in women. My prediction is that powerlifting style training and Jane Fonda style training would lead to similar results in glute growth, but my methods would lead to even greater results. But of course, I could be wrong. One thing that’s great about conducting research is that you always end up learning something in the process. It’s important to realize that there are multiple ways to effectively train the glutes. Don’t knock Jane Fonda, in situations where no weights are available, her methods are surprisingly effective.