Core stability training has been all the rage in the fitness field over the past decade, for good reason. Learning to move at the hips while keeping the spine stable is crucial for new lifters. While most lifters and trainers are well aware of simple core exercises that are properly suited for beginners, many aren’t well-versed in progressing these exercises to suit more advanced lifters. Too many lifters extend the duration of basic planking drills as their primary method of progressive overload, which builds strength endurance. But what about strength and power? A strong, powerful core is needed to stabilize the body during heavy lifting and explosive sporting actions.

In this article, I’ll go over some of the most effective core exercises that more advanced lifters can add to their libraries and discuss ways to make some of the classics a little more challenging. 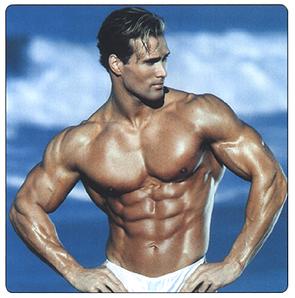 Before I delve into exercises, let’s first discuss the core. The core refers to more than just the abs. It encompasses the entire musculature of the torso, including the abdominals, obliques, erectors, glutes, hip flexors, lats, adductors, and more. The core acts on the shoulders, scapulae, spine, pelvis, and hips. At the spine, it can produce, reduce, and resist spinal flexion, extension, lateral flexion, and rotation. It is responsible for transmitting forces from the upper body to lower body. Please read Strategies for Optimal Core Training Program Design for a comprehensive article on core training which I wrote with Brad Schoenfeld. As you can see, proper core training will require more than just a couple of sets of crunches or hanging leg raises!

Unfortunately, many lifters don’t train the core in its entirety, which leads to sub-optimal results. While the core doesn’t require a ton of extra attention, assuming a lifter is already performing squats, deadlifts, hip thrusts, chin ups, presses, and rows, additional exercises are indeed needed to fill gaps. To train the core completely, one must consider the joints in play, the possible actions at each joint, and the common force vectors the lifter is seeking to strengthen. When training core stability, you’re enhancing the body’s ability to resist movement, hence the exercises can be considered “anti-movement exercises.”

First, attach a band to an immovable object. Power racks are preferred, but machines work well too. We typically use a pro-mini or light long band (see Elitefts, Sorinex, or Rogue for bands), but the band you use will be dependent on your strength levels. You can use a lighter band and just walk out further for more resistance.

Take the free end of the band and grip it in both hands, double overhand. 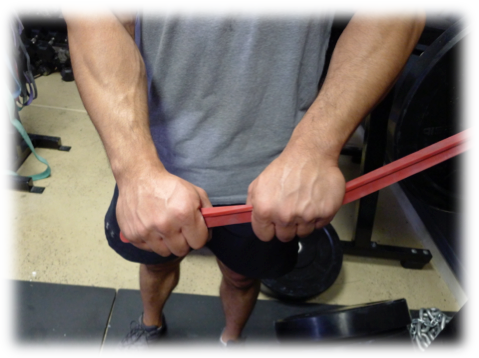 Walk the band out until the desired amount of tension is reached, take a sumo stance, with knees slightly bent, in an athletic stance with good posture. Keep a fairly upright torso with the hands near the chest.

Keeping the spine in neutral, extend the arms straight out in front of you so that the elbows are fully extended and the hands are chest level. You should be out far enough that when you extend your arms, they make a 90 degree angle with the band.

This exercise may be done for time or reps. We typically do 2-3 sets of 10-20-second holds on each side 1-2x per week. Cable columns can also be used for this exercise. HERE is a video.

The RKC plank looks very similar to a normal plank, with a few subtle differences. In the RKC plank, the elbows can be further out in front, which lengthens the lever. The feet and arms can be closer together, which narrows the base of support. Finally, the pelvis is posteriorly tilted with a giant glute squeeze, which causes the anterior core, along with the glutes, to fire much harder. 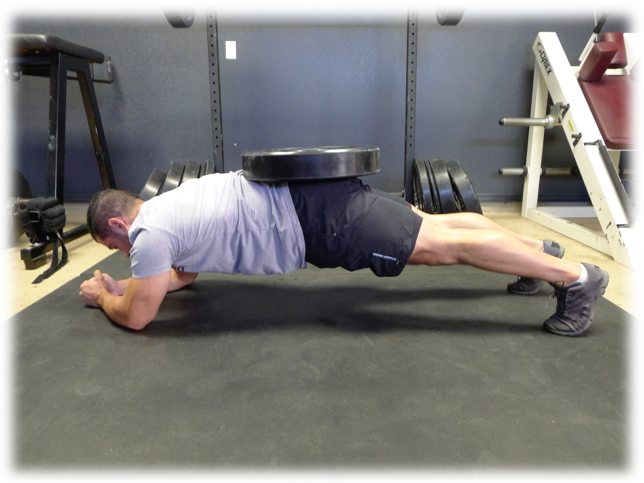 We will place between one and four 45 lb plates on the low back of the lifter. Rather than attempt to hold for longer time, we attempt to use more load or alter technique so that the static hold is more challenging. Even with advanced lifters, 20 seconds is about the max time we’ll go for with this movement. We typically do 2-3 sets of 10-20-second holds 1-2x per week. HERE‘s a video (without the weight).

The best core exercises often seem overly simple, but when performed correctly, they are very challenging. This is definitely the case with the hollow body hold.

The hollow body hold trains anti-extension, and will be performed for time rather than reps. Again, 15-30 seconds for 2-3 sets 1-2x per week is sufficient to get an ideal training effect from these. HERE is a video you can watch (I miss my beard and mohawk!).

First, lie on your back with the legs straightened out and the arms extended overhead. From this supine position, you’ll elevate the legs and arms off the floor and press your low back into the ground, flattening out the lumbar spine and holding tension in the core. Make sure you elevate just enough so that your anterior core is really fighting the extension moment being created, if you go too high, you’ll make the exercise easier and cheat yourself on the benefits it provides. Dumbbells and ankle weights can be used to increase the difficulty of the exercise. HERE is a video you can watch (I miss my beard and mohawk!).

Another classic anti-extension core stability exercise is the dead bug. However, this drill is not challenging enough for the typical advanced lifter, so modifications are in order. Slowing the movement down and holding the bottom position while exhaling fully on each rep will increase the difficulty, but many lifters will move past this point quickly as well. When body weight is too easy, we load the movement up to achieve progressive overload.

Ankle weights may also be added to the lower extremities if they are available, but it’s typically the arms that get ‘too light’ first. Just 5-10 lbs will add enough difficulty for most lifters, but you can go heavier than this so long as you control the movement. You’ll set up for a regular dead bug holding a weight in each hand (dumbbells or plates may be used). Lower opposite arm and opposite leg to just above the ground, exhale and return to the start position before lowering the next pair of limbs. 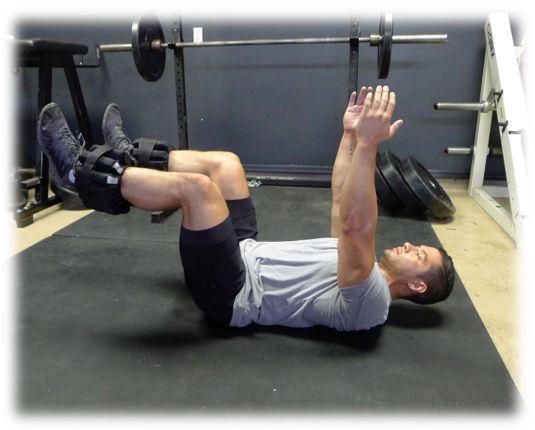 The dead bug is one of those movements where it’s up to the lifter to make difficult. You can go through the motion without engaging the core very much, or it can be one of the most challenging anti-extension drills in your library. So make sure you’re staying tight throughout the movement, and do not let the spine hyperextend or the pelvis anteriorly rotate. We prefer to keep our lumbar spines flattened out on these, but a neutral spine and pelvis is preferred by many trainers. 2-3 sets of 5-10 reps on each side performed 1-2X/wk is recommended. HERE‘s a video.

The landmine trains the torso’s ability to resist motion – the bar actually induces lateral flexion torque, rotation torque, and flexion torque on the spine, so the core has to work hard to remain stable. Not only is it a fantastic core exercise, it’s fun and jacks the heart rate up pretty high as well.

You’ll need to set up in front of a landmine or grappler unit, but if one is not available, a barbell stuck into a corner will suffice as well.

Pick up one end of the landmine either fist over fist or with an interlocked grip. How far away you stand will depend on your arm length and height. Once your grip is set, the forearms should make a 90 degree angle with the bar.

In an athletic stance, keeping the core engaged, extend the arms out in front but don’t lock them out completely. Drop the landmine down towards one hip without bending the elbows. While maintaining some distance from the landmine, return to the start position and drop to the other side.

The majority of the motion should take place at the shoulders. Remember, you’re trying to resist spinal motion, so keep the core braced and don’t let the weight control you. For variety, you can pivot and rotate around the bar (see HERE), and if you have a grappler, you may do them like THIS. If performing these, 2-3 sets of 10 reps on each side 1-2X/wk will suffice.

The ab wheel rollout is a great progression once you’ve mastered planks and stability ball rollouts. The rollout trains anti-extension and may be progressed further by adding a band to the ab wheel.

First, kneel down on some type of padding (the Airex Balance pad works great for this). Take the ab wheel in both hands and center your body over it. Before descending, extend the hips, squeeze the glutes, and engage the core. This alignment should be kept throughout the movement.

To descend, think about sinking your hips to the ground as your arms extend forward – don’t envision reaching with the arms. Once you’ve hit the lowest point, pause for a second then, pull the arms back underneath the body until the start position is reached.

Make sure to not allow the low back to arch or the pelvis to anteriorly tilt during the movement. Another common mistake is allowing the hips to flex too much on the way up. This motor strategy utilizes the hip flexors to pull the body backward, but it’s not ideal.  Think of this exercise as a moving RKC plank. We do 2-3 sets of 6-15 reps 1-2X/wk. HERE is a video for you to check out. If the kneeling version is too easy, try negatives from the standing position, as shown HERE. If this is too easy, be like Ross Enamait and do them one arm with a weighted vest HERE, or utilizing a ramp HERE, or pausing isometrically HERE. 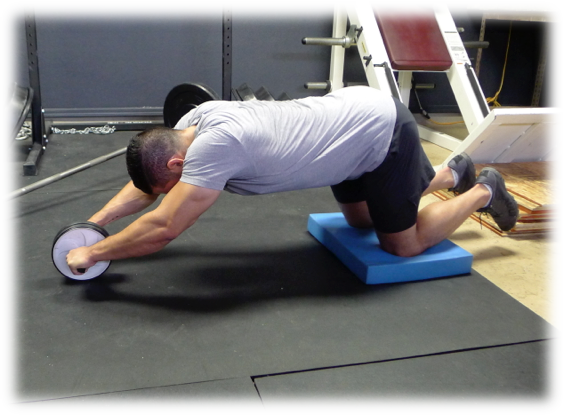 Too much hip flexion – see pic above for proper form

The off bench oblique hold trains the body’s ability to resist lateral flexion. You can think of it as a loaded progression for the side plank.

Set up in a GHR laterally, with the bottom foot out in front and the top foot behind you. The GHR pad should be positioned at the side of the hip. Your hips and knees should be fully extended, the glutes should be tensed, and the torso should be completely straight. Grab a dumbbell with the bottom arm and return to neutral. Hold this position for the prescribed duration. 2-3 sets of 20-30 second holds once or twice a week is sufficient. You can also do these off of a standard bench. HERE is a video. 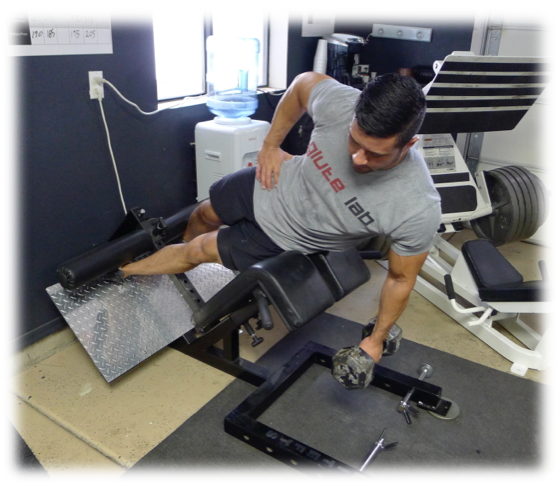 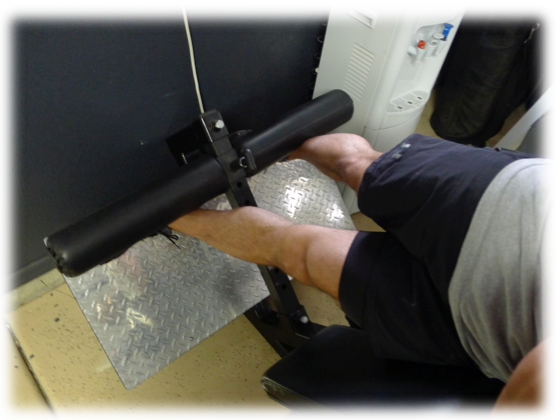 The suitcase hold is another anti-lateral flexion drill, and is very easy to set up. Simply place a dumbbell or kettlebell on a bench or step. Stand next to the weight so that it is at your side. Pick it up with the hand and stand tall. You want to keep the shoulder girdle engaged, spine neutral, and glutes squeezed throughout the duration. Make sure you don’t go so heavy that you have to lean or rest the weight on your side to get through it. Go heavy enough for a good challenge, but be able to maintain good alignment the entire time. A barbell can be used in a power rack to enable even heavier loading. 2-3 sets of 20-30 second holds once or twice a week is sufficient. HERE‘s a video.

If you’re astute, you might be wondering about anti-flexion spinal stability strength. If you read this blog, then I’m assuming you already perform squats and deadlifts, in which case you’re very effectively strengthening spinal anti-flexion stability. A stronger core can improve performance and prevent injuries. If you’re an advanced lifter seeking challenging core stability drills, give the exercises mentioned in this article a try.