Deadlifting oozes strength and functionality. There’s something to bending over, grabbing a hold of heavy weight, and standing up with it that makes you feel like a primal powerhouse. In a previous post, I discussed how to increase your deadlift. But what about various deadlifting variations such as Romanian deadlifts (RDL’s), American deadlifts, stiff legged deadlifts (SLDL’s), and straight leg deadlifts? How are these performed, and what are the key differences between them?

Deadlift variations are loaded hip hinge patterns, and the hip hinge is an essential skill to master in the weight room. Learning how to stabilize the spine and pelvis under load while bending over forms the basis of many popular strength training exercises such as bent over rows, squats, deadlifts, kettlebell swings, good mornings, t-bar rows, and bent over rear delt raises. Even bending over and picking up dumbbells off the floor or out of the lower rack requires a proper hip hinge, as does picking objects off the floor and assuming an athletic position in sports.

Learning the hip hinge is also one of, if not the most, difficult movements to teach beginning lifters. Heck, most lifters with years of experience tend to screw this pattern up on a regular basis. This is partially due to the fact that the movement requires strength and coordination throughout the entire posterior chain, as many lifters have trouble ‘feeling’ these muscles in the first place. The glutes, erectors, and hamstrings must work in unison to allow the torso to drop forward while maintaining a neutral spine and pelvis.

Since stoop lifting can be achieved via myriad combinations of ankle, knee, hip, and spinal motion, it’s of no surprise that lifters will often choose the most economical bending pattern – one that uses less active muscle and more passive elastic forces via stretching of the muscles, tendons, ligaments, and fascia. This is achieved through rounding of the spine, and while this might be fine during activities of daily living, under heavy load in the weightroom, it’s recipe for disaster. Therefore, you’ll want to learn to keep the load on the active components (the muscles) as much as possible. One way to groove this is by performing deadlift variations using lighter loads, as is the case with the four mentioned in this article. 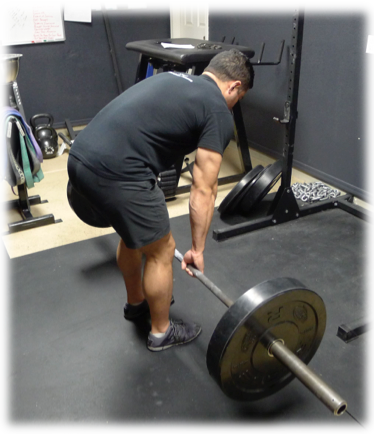 When performed properly, the RDL is an excellent way to build the posterior chain, but unfortunately many lifters limit their leg training to squats, leg press and leg extension variations. While these exercises will certainly develop the quads, they neglect the hamstrings which are key in developing a strong and powerful physique. In this post, I will discuss the proper execution of the RDL and review some common variations of the movement.

For the standard RDL, you want to start standing erect, holding the bar with a double-overhand grip. When going heavy, you may use a mixed grip, but I suggest sticking with a double overhand grip during your lighter sets to build up your grip strength. One option for getting into the RDL starting position is to deadlift the weight up from the floor, but ideally you’d have a squat rack with the pins set to just below hip height. This way, you can simply take the bar off the rack and step right back into position. 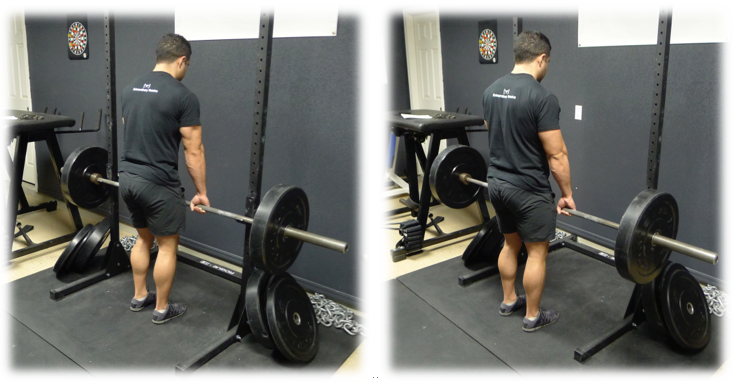 Unracking the bar for an RDL 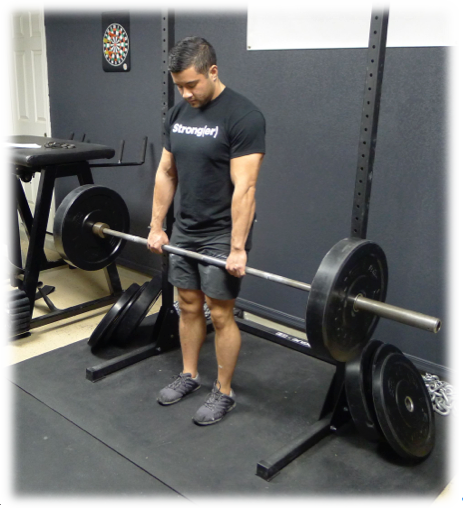 Grip is set just outside the hips

The stance is going to be narrower than a squat, about hip width apart, with the toes pointed straight ahead. Some lifters like to flare the feet a bit but this should be minimal – no more than 15 degrees of foot flare. 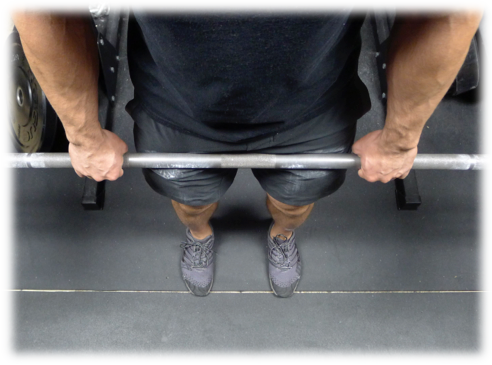 At the start, the bar should be resting against the thighs, and for the descent you want to sit the hips back allowing the torso to drop down. The knees will bend slightly but the shins remain vertical throughout – the bar should continue to drag along the thighs the entire time. During the negative, you want to maintain a slight arch and tension in your low back. This tilts the pelvis anteriorly and puts a greater stretch on the hamstrings. However, the lumbar extension and anterior pelvic tilt should be slight and not excessive. Moreover, do not allow the lumbar spine to round or the shoulders to be protracted during the RDL. Keep the chest up and the shoulders back. 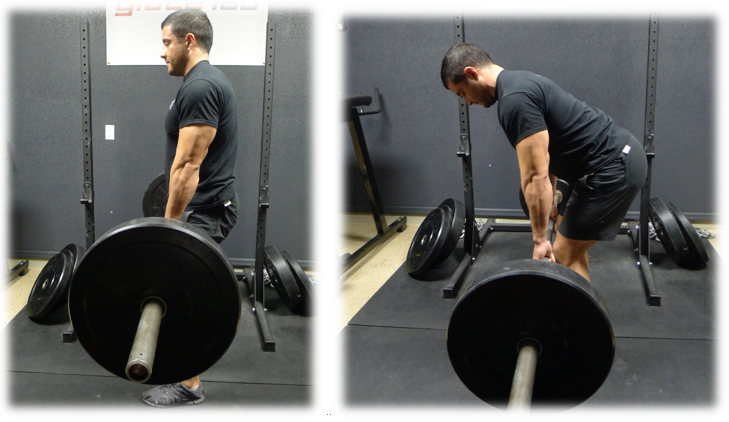 Most lifters will find that if they perform the movement with proper pelvic positioning, they will feel a big stretch in the hamstrings as the bar reaches the kneecaps. However, individuals with superior hamstring flexibility will be able to descend to mid shin level (some very flexible individuals can descend all the way to the floor this way). Even so, I recommend that lifters reverse the movement once the bar reaches just below the knees, as this is the range of motion with which we are primarily concerned.

Stop the negative once the bar reaches the knees 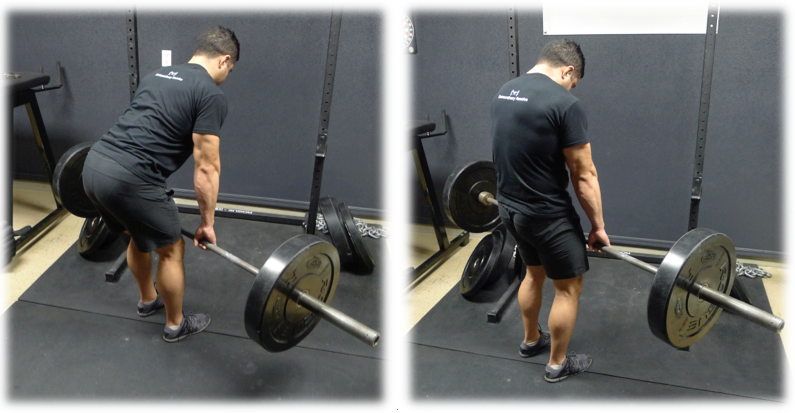 Here at The Glute Lab, we’ve found that it is possible to perform the RDL with almost no glute activity when focusing primarily on the hamstrings, at least with lighter loads. This is not a good thing. It is therefore critical to understand how to utilize the glutes in a hip hinge pattern. The American deadlift is very similar to the RDL, however you are going to incorporate some pelvic motion. On the way down, you want to utilize the erectors to hold slight anterior pelvic tilt. And on the way up, you want to use the glutes to produce slight posterior pelvic tilt. It is important to note that posterior pelvic tilt is accompanied by a glute squeeze and not by lumbar rounding. At the top of the motion, the bar might move forward as your glutes push the hips forward, you can think of the American deadlift as simply a glute-centric RDL. Again, the glutes tilt the pelvis and the lumbar spine remains stable. 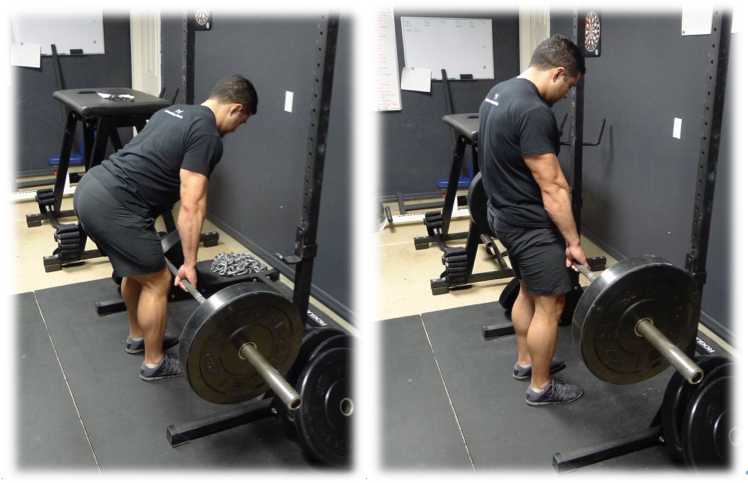 At the top, the glutes are squeezed but the lumbar spine is not rounded

Dimel deadlifts were popularized by Louie Simmons and Westside Barbell Club years back. These are akin to American deadlifts for high reps. Use 30-40% of your 1RM deadlift and bust out 15-30 reps for maximum glute pump. If you do these right, it feels a bit like a hip thrust.

Many lifters feel that the RDL, stiff legged deadlift, and straight leg deadlift are synonymous with one another, and if you talk to ten different strength coaches, you’ll probably get ten different descriptions of these variations. However, I believe that these are 3 distinct variations and are performed quite differently from one another. Here’s how I distinguish between these variations (again, these are my descriptions, which will differ from other coaches’ exercise descriptions). While I already discussed the RDL (and ADL), I will now discuss the stiff legged deadlift, then the straight leg deadlift.

The stiff legged deadlift is simply a deadlift performed with high hips while trying to target the hamstrings. Ideally you will perform this lift out of a rack and you will use a lighter load compared to your regular deadlift. Simply back out of the rack using a double overhand grip and bend over while trying to keep tension on the hamstrings. The knees will bend, the shins will stay vertical, your hips will sit back, and you will try to keep the hamstrings as stiff as possible throughout the movement. With this variation, you can descend all the way to the floor or stop just short of the floor. Both ways have their benefits. You can also start from the floor if you’d like rather than taking the bar out of the rack, however, most lifters use better form when starting with a negative action first. 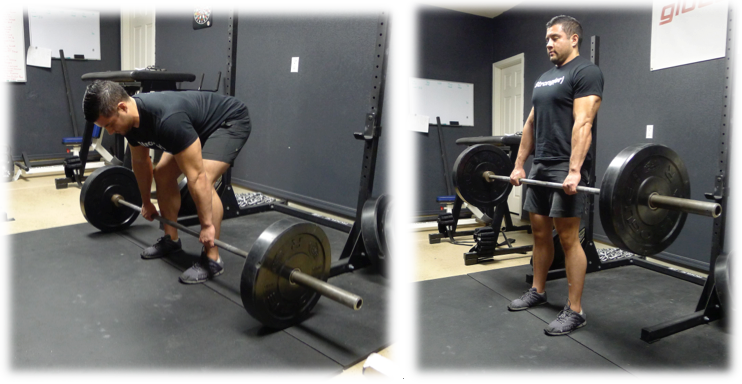 In the straight leg deadlift, you keep the legs straight – there is no knee bend. The spine will be kept in neutral and the bar will drift out in front of the lifter slightly. The range of motion will be very short because the lifter will quickly run out of hamstring flexibility. I’m not a big fan of this variation, however, it does stretch the hamstrings very well and you don’t have to use heavy loading to receive a training effect. Many old school lifters would stand on a bench and perform these while rounding their backs to full flexion and descending all the way until the bar touched their shoes. While this may be fine using submaximal weight of around 20-40% of 1RM, problems will quickly arise when heavy loads are used. Therefore I do not recommend this variation and instead recommend the stiff legged version discussed above. 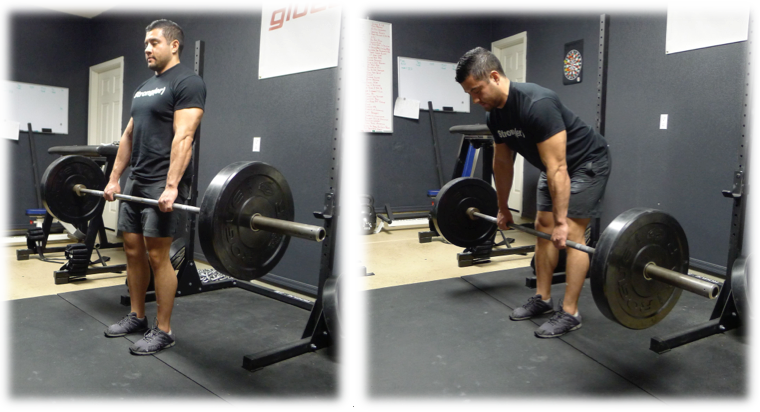 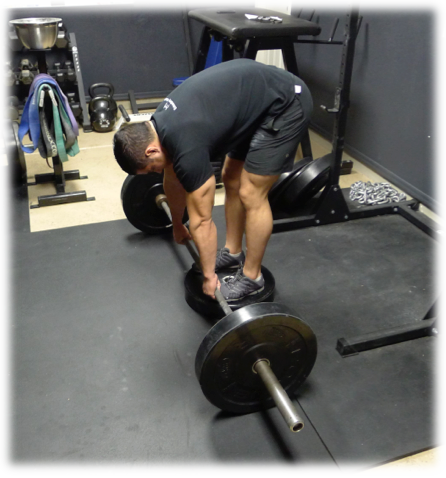 Here is a ten-minute instructional video that discusses the key differences between each variation.

What if you’re a beginner and would like to practice hip hinging before you grab a hold of a barbell – what are the best drills to perform? Below are four different exercises you can experiment with. One is from yours truly and the other three are from my colleague Tony Gentilcore. Click on the links for instructional videos.

The RDL and it’s variations are great exercises for the hamstrings, glutes, and erectors. Learning how to hinge at the hips properly while maintaining a neutral spine under load is a crucial component to weight training. A strong RDL will enable you to keep better form during bent over rows, kettlebell swings, back extensions and countless other posterior chain exercises. At The Glute Lab, we stick solely to American deadlifts and stiff legged deadlifts simply because we feel that the ADL is superior to the RDL and the stiff legged deadlift is superior to the straight leg deadlift. Experiment to find the variations that work best for you. Remember to utilize lighter loads in relation to your maximal deadlift when performing these exercises as you’re grooving motor patterns in addition to promoting muscular adaptations.