Topic of the Week 2 – Best Squat and Deadlift Combination

By Bret Contreras March 3, 2011 Powerlifting, Topic of the Week

Last week I posted the first topic of the week…on types of squats. The comments were outstanding. Although I liked what everyone wrote, I especially liked Rob Panariello’s comments – the guy is extremely intelligent.

For this week’s topic, I’d like to discuss deadlifts. There are advantages and disadvantages to all types of deadlifts:

– Conventional deadlifts seem to maximize hamstring activity, but they impose a larger penalty on the low back.

– Sumo deadlifts are easier on the low back, and may increase quad and even glute activation, but the can be problematic for some lifter’s hips.

– Trap bar deadlifts are most likely the safest*, as they allow the knees to move forward a bit more so the quads can take more of the load, but this means that posterior chain will receive less of the load (more on this later).

*If this variation allows individuals to go much heavier, then the loading on the spine could be the same or even higher than the conventional variation simply because more resistance is being employed, despite the fact that the horizontal distance from the spine to the bar’s COM is closer.

There are plenty of good deadlifts. You can toy around with:

center of gravity (conventional, hex, behind the back aka. hack lift)

If I Could Only Do One Exercise…

It’s easily arguable that the deadlift is the best exercise is existence. The same argument could be made of a squat. If I could only do one exercise for the rest of my life, I’d want to do a mixture between the squat and deadlift.

1. The knees are usually more forward

2. The hips are often slightly lower

Here’s the typically hip and knee position of a conventional deadlift: 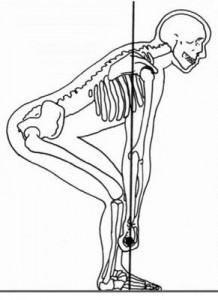 In the case of the trap bar deadlift, the kinematics change and the knees and ankles tend to flex more and the center of mass shifts forward.

This makes it a combination of a squat and deadlift. If you ever read Brawn back in the day, you remember he was a huge proponent of this lift. Some have even called the exercise the “Trap Bar Squat Lift.”

What About the Straddle Lift?

I read about this exercise years ago and believe it’s one of the best exercises in existence. This exercise is not to be confused with the Jefferson lift, which many people also call the straddle lift. The straddle lift I’m talking about looks like this: 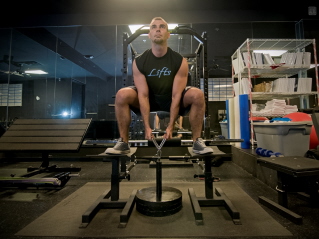 I wrote about this exercise in my glute eBook a couple years ago. It’s an amazing exercise. Here I am doing it with a loading pin I got from Ironmind around ten years ago. They make a 12″ and 15″ version. I’m also using a DD Handle and two pulling stands, but you can stand on anything that’s stable. I’ve come up with this analogy to describe the straddle lift:

The hands go inside the thighs so the knees can travel forward more, but you can also stand on different box heights to vary the range of motion. In the picture above you can see I’m going pretty deep. This exercise is very safe on the low back, and is an excellent variation that I wish more people tried.

You can do something similar with a belt squat machine sold by Westside Barbell, Elitefts, or Sorinex, but in my experience the free weight version works better. 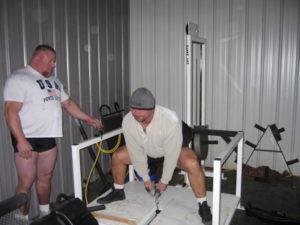 Though this variation is not very practical for athletes in large settings, it could be with some creativity.

Strangely, I’ve found that the trap bar deadlift and straddle lift do not carry over to my squat, front squat, conventional deadlift, or sumo deadlift much. I would think that they would since they’re such amazing lifts, but perhaps since they’re right smack in between squats and deads they aren’t specific enough to either one to transfer over much.

Finally, the Topic of the Week: What Type of Squat and Deadlift Combination is Best?

Last week we hashed out our thoughts on squat variations. Keep your same squat, and now pick a deadlift that you like that compliments the squat.

For example, the box squat and trap bar deadlift may be slightly redundant…as they’re at similar points on the quad/hip dominant spectrum.

Mike Boyle likes the rear foot elevated split squat (aka Bulgarian split squat) and the trap bar deadlift. I can very much appreciate this combination for its emphasis on safety.

Right before initiating movement on the bar, I move the knees back and raise the hips to really tense the hammies, which considerably adds to the power of the pull.

I personally believe that this combination – the full squat and conventional deadlift, will lead to the maximum total power output potential of the glutes, quads, and hamstrings. The hammies are so darn important in sprinting, which is why I prefer the conventional deadlift over the trap bar deadlift.

Now it’s your turn. Which combination do you prefer?