Titin and Myotilin Comin’ Through in the Stretch

This article is going to seem a little “out there” for most of my readers, but try your best to understand the information as it’s very important for exercise science and I will be referring to this article as time goes on. For the past six months I’ve really delved into the literature involving structural proteins. This has been a very intriguing process. First I will discuss some important concepts in musculotendinous modeling, then I’ll delve into some exciting new research involving titin and myotilin – two exciting proteins that play a huge role in athletic performance.

Contributors to Force – The CC, PEC, and SEC

Below is a figure that will help you understand the primary components that contribute to the development of force. You will notice that this model contains three components. 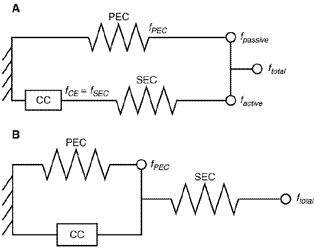 We’ve been taught that muscles produce force through cross-bridge formation (the sliding filament theory) and that muscle force gets weaker as the muscle is stretched. Many have heard of the length-tension relationship, which dictates that force will decrease as a muscle is stretched to long lengths due to the fact that less cross bridges will form. While this is true and active force does in fact diminish, passive force rises to “pick up the slack.” Below is a model of a rabbit psoas muscle. 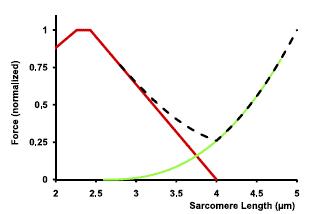 As you can see, the contractile force does indeed diminish, but elastic force rises as the sarcomere is stretched. Researchers have always wondered where this extra passive force is coming from, and have long suspected that it comes from a molecular protein called titin.

Titin is actually the largest protein in existence and consists of 34,350 amino acids! Here’s the way we used to think of titin during active stretching (think eccentric contraction): 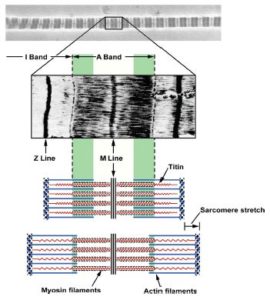 Some brilliant researchers have been making some very good headway as to where all this passive force is generated. Last year, a researcher named Tim Leonard came up with a very good theory in the AJP – Cell Physiology, suggesting that titin actually binded to actin when actively stretched (think eccentric contraction). Here’s his model: 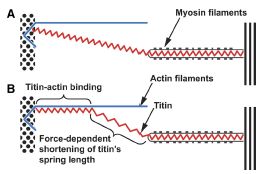 Just recently Kiisa Nishikawa published a fantastic article in The Proceedings of Royal Society B. What she proposes is that titin first binds to actin like this: 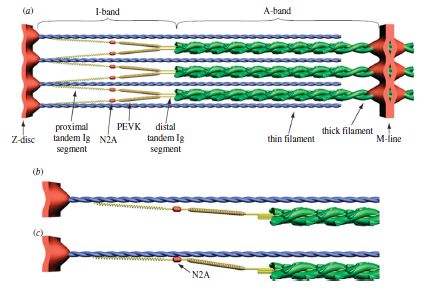 Then, titin winds up during the active contraction like this: 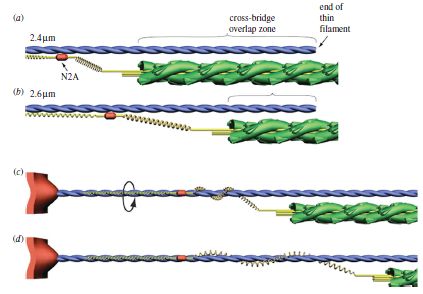 This model effectively explains why concentric contractions require so much more energy than eccentric contractions and why we’re much stronger eccentrically. The contractile components do all the work winding up and stretching titin when the sarcomere shortens, and then the incredibly strong and stiff titin recoils and unleashes elastic energy upon eccentric lengthening. Titin therefore provides much stability at long muscle lengths and helps protect the sarcomeres from damage. Furthermore, titin acts as a spring, so it’s not just the tendons that provide “springiness” or “elasticity”; it’s also the muscle fascia and especially the titin within the sarcomeres.

What’s very interesting is that our titin isoforms grow shorter and stiffer as we age from babies to adults (to allow us for more stability and greater force production), and powerlifters, Olympic weightlifters, and sprinters have all been shown to possess titin alterations that lead to enhanced force production. The bottom line is that training at long muscle lengths will lead to favorable adaptations which will dramatically enhance force production through stronger titin and greater elastic recoil.

Lena Carlsson in Neuromuscular Disorders showed that during eccentric contractions, a protein called myotilin plays a key role in myofibrillar remodeling and the creation of new sarcomeres in series. Sarcomerogenesis can occur in two ways; through a split of a single Z-disc, or by alteration of a single sarcomere, which is shown below. 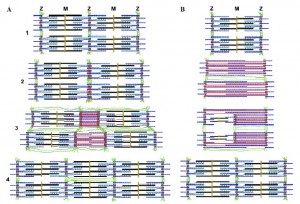 The take home point is that this new length is only added through eccentrics and this helps prevent muscles from injury. This has implications ranging from postural to athletic enhancement.

I realize that this material is quite complicated, but just know that full range movements that include the eccentric component are critical in the enhancement of mobility and stability. Many practitioners are aware of the motor control and neural aspects of mobility and stability, but are unaware of the structural aspects involved. I believe that this research is of enormous importance to the physical therapy and sport science fields.