I filmed a video discussing the single leg RDL. I believe it’s a very important exercise for many reasons. First of all, a couple of studies have shown that sensorimotor training led to improved power production. I’d much rather have athletes perform exercises like single leg RDL’s and single leg squats for sensorimotor training than exercises on wobbly boards, as this approach allows you to kill four birds with one stone by increasing balance, increasing hip stability, increasing hip extensor strength, and hopefully increasing power production.

I realize that some coaches may take issue with my stance on external rotation of the non-grounded leg. I could argue both sides, but I don’t think it’s that big of a deal. If you keep the non-grounded leg straight, I’m fine with your decision. But the true nature of the gluteus maximus when it moves into hip hyperextension (which is where you “lock the leg” if you do it right) is to externally rotate the femur. From a standing position, simply squeeze your glutes as hard as possibly and you’ll feel your legs turn outward a bit and the feet trying to “screw” outward. Why fight this natural tendency?

But again, I could argue either route so you can make up your mind as to whether you’re picky about the foot turning out or not. That said, you never want tight hip external rotators so you should employ various hip stretches and mobility drills to ensure that they don’t shorten.

I hope you enjoy the video, BC 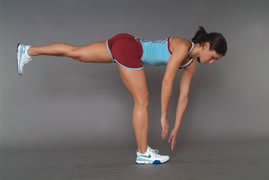