I’ve got a nice interview for you from Wil Fleming on the topic of Olympic Weightlifting. Wil just released a DVD titled Complete Olympic Lifting – it’s currently 40% off until the end of the week. I received an advanced copy and loved it – precise and succinct with great video footage. I’m always interested in learning different coaches’ methods, exercises, and cues used to improve Olympic lifting performance, and Wil’s approach is excellent. I randomly embedded some of Wil’s Youtube videos into the article, so don’t fret if there’s no rhyme or reason to the video placement. Alright, here you go – I hope you learn something from this interview:

I started out Olympic lifting like most other males did, in preparation for high school football. Under the “watchful eye” of my high school football coach I was taught to power clean with the dreaded “do that over there” coaching cue. Needless to say my first year, or so, of using Olympic lifts was uneventful and unproductive.

Fortunately, at the age of 15 I wanted to become a much better football player and happened to decide to workout at a gym that specialized in Olympic weightlifting. I easily could have ended up in any of a dozen other gyms that did not specialize in Olympic lifting, but by chance I walked into this gym.

I ended up under the truly watchful eye of an Olympic team coach and a 1992 Olympian. The focus was on technique from the day I walked in, and all of the lifters were made to be great on the platform.

Two years later I won the Junior National Championship, and was invited to the Olympic Training Center to try to hone my skills.

I moved on from the training center and competitive weightlifting to compete as a hammer thrower at Indiana University. Over the course of 5 years of collegiate competition and on the way to the Olympic trials in 2008, the Olympic lifts continued to make up the majority of my training outside of throwing the hammer. This period of time was actually a time when I hit the biggest numbers on the platform, when I achieved a snatch of 145k and a clean and jerk of 182.5 k.

As a coach, I have worked with 1000’s of athletes to use the Olympic lifts to their advantage in my facility, Force Fitness and Performance, and recently started a weightlifting club for junior and senior athletes.

The time spent working with high school athletes has really made me clean up my cues, tighten my progressions, and focus on the highest return movements to help my athletes get the greatest benefit in the shortest amount of time. 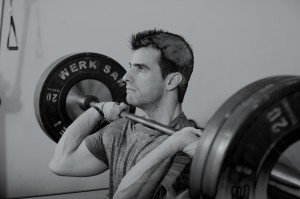 I really don’t think anything is absolutely mandatory in training, other than movements (squat, hinge, push, pull, etc.). There are definitely preferred ways in which I would like to see those movements expressed, but no one exercise should be considered mandatory, because there will always be someone, for some reason, who cannot do a particular movement in a particular way.

In an athletes’ program I would prefer to do Olympic lifts, but about in regards to this I should be more clear. There is such a benefit to moving heavy loads quickly, that I would love for all athletes to do them.

Two years ago if you had asked me, I wouldn’t have said anything beyond that, but there are so many exceptions, athletes with previous back injuries, bad hinging patterns, or whatever, so just saying “Olympic lift or bust” won’t work.

I have written a couple articles on T-nation about this topic, but there are tons of cool replacements for Olympic lifts (trap bar jumps, really heavy kettlebell swings) that coaches could use in the instance that an athlete cannot Olympic lift.

Making exceptions when an athlete has a restriction or limitation in movement is something that I think any good coach should do. The Olympic lifts are nothing special when it comes to teaching them. Certainly there are more technical points to coach as they are complex movement that combine hinging, pulling, and squatting in a sequential manner, but too many coaches make teaching them a bigger and more involved process than it should be. At my gym we are able to get most athletes cleaning and snatching within 1 to 2 sessions, because we have simplified the process to the most essential aspects.

The Olympic lifts are complicated movements, but the teaching of them shouldn’t be. That is why I put together Complete Olympic Lifting, a DVD and manual that go over our entire teaching process for the clean, snatch, and jerk. 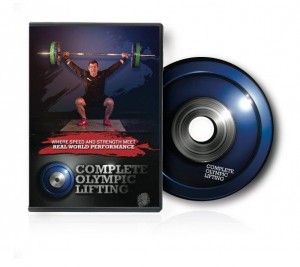 The big fundamentals of these two movements are really similar. Ideally you are hitting positions in the 1st and 2nd pull, in each lift, that will translate to the other. So training them isn’t a lot different until you add in the jerk. Once you add in the jerk, the effective volume of doing 1 clean and jerk almost doubles, so you have to be pretty careful with how many reps you are prescribing when it comes to the clean and jerk.

You’ll also find that at some point strength is the limiting factor of the clean, because you catch it in a front squat position, coming up with it is very much dependent on how much an individual can front squat. The snatch on the other hand is very technique dependent. Once the bar is stable overhead, coming up with a snatch is not a difficult thing to do in terms of leg strength.

4. Can women learn the Olympic lifts as quickly as men, or do they require more time to become strong and coordinated?

It’s funny that you asked that, because if you go back to my first experience with some great Olympic lifting coaches when I was 15 years old, I walked into the gym and the first person I saw lifting was a high school girl who was maybe 58k and was cleaning very close to my max at the time, which was 75k.

Women can completely learn the Olympic lifts in a short amount of time. For women and men, it isn’t necessarily about their strength when they start to Olympic lift, it is about their ability to complete fundamental movement patterns like the hinge and squat. If they can do those things, and can jump and land well, then they are ready to learn Olympic lifting.

5. Switching gears, let’s say that my goal is to maximize my vertical jump, and I already do squats and plyos. Will Olympic lifts add any value to my program?

While squats and plyos are a great start, someone looking to improve their vertical jump will also need to do something in the weight room that has a high rate of force development (RFD).  This could be a weighted jump of some sort, but Olympic lifting really fits the bill, if the athlete has enough skills to do the lifts effectively.

I like to break training for power into 3 main categories:

Light load – Still on the high velocity side of things, but with some external loading, weighted jumps are typically here.

Heavy load: Still high velocity, but with higher loads. This is where Olympic lifts lie, and these are going to recruit the highest threshold motor units which also happen to have the highest RFD.

So complete programs will have elements of all 3 modes of power training to help improve the vertical jump. 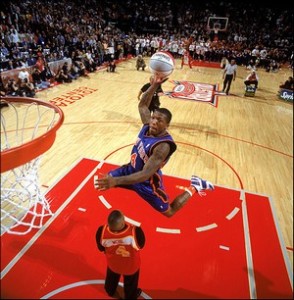 6. Thanks Wil. Tell me a common problem you see when beginners first start out with the clean.

It’s a really simple problem to fix, so this isn’t going to make me sound like a genius with some awesome coaching cue, but…

Beginners shouldn’t always start from the floor. You have to possess a serious amount of mobility at the t-spine, hip, and ankle to get to the floor to start. When you don’t have that mobility you are going to get in some repeated flexion patterns in the lumbar spine and under the load of picking a bar up off the ground, and if so you won’t be Olympic lifting for long.

So I always say that the easiest fix is to work on getting better hip mobility to get to the ground, while doing hang cleans and cleans from a low block.

7. What about the snatch?

The snatch should be an active movement from the bottom to the top. I think people get that wrong a lot. It is easy to see and conceptualize that the pull portion of the lift is “active” but the receiving position overhead needs to be just as active.

You can’t just Ron Popeil it and “Pull it…and forget it”, once the pull up happens an equally as aggressive pull under and punch overhead must occur to safely and firmly lock the bar in the overhead receiving position.

Quite simply, I just don’t think people do enough jerks. That is the number one mistake with the jerk. Going further though, the number one technical mistake is a willy-nilly approach to how one receives the bar overhead.

A good receiving position has several common characteristics, but all are variations off of a 90/90 split squat extended:

A vertical lead shin. Too many athletes end up with their knee gliding forward which leads to instability.

A forward pointing rear foot. An externally rotated rear foot means you are drifting back in your jerk and you are looking for stability. The hips should move neither forward nor back in the jerk.

9. Okay, almost done. Should football players stick with “power” and “hang” variations of the clean and snatch, or should they learn the full lifts?

Most athletes will get great benefits out of the hang and power variations, and nearly 95% of the reps that I write for my athletes are based off of those variations.

I do think that it is important to equip your football players, or basketball players, or whomever with the ability to receive the bar in the low squat position. This doesn’t mean a lot of reps actually doing it this way. Instead, I use combos like a power clean + front squat. Using these combos helps athletes to learn the proper foot position when receiving the bar. Rather than jumping forward or into a wide-footed-starfish position, the athlete will try to efficiently land in the racked position and then move smoothly into a front squat.

This helps athletes to learn how to absorb force as well as they produce it, which is an extremely valuable skill.

10. Love it. Last question. Let’s say I’m a lifter and I’ve decided to get really serious about Olympic weightlifting. How should I go about this?

If you want to get prepared for competition, there is one thing that most people are lacking, and that is bar skills. Just like going into competition for football or basketball, Olympic weightlifting is a sport at the highest level. While strength is a big part of being successful in Olympic weightlifting (like football too), technique is a huge part. You wouldn’t go on the football field without practicing your alignment, footwork, and ability to throw the football, so don’t go on the platform without some serious skills first.

The simple act of spending the first 5-10 minutes of a session doing 25-50 reps against just the barbell can greatly improve one’s ability to perform the movements. All of my lifters spend the beginning of the session doing “imitations” that are their perfect ideal of what a movement should look like with only a barbell. This simple concept can speed the path to being an excellent Olympic lifter tremendously.