The Evolution of the Hip Thrust

As a lifter, I’ve been hip thrusting now for 9 and a half years, and I’ve been prescribing them to clients as a personal trainer for the same amount of time. I’m not sure if I’ve ever told this story on my blog, so here’s how the idea for hip thrusts came to mind.

I was hanging out with my now ex-girlfriend (poor Jeanne), watching UFC fights. It was Tito Ortiz versus Ken Shamrock, and though I didn’t really care who won, I didn’t want the fight to end quickly. Tito full-mounted Ken, and I was hoping that Ken would buck him off. Having spent most of my life wrestling with my twin brother, and having done a couple of years of MMA training, I was no stranger to escaping the full-mount position. There are several ways to escape, but the more explosive your “hip bump,” the better off you are (interestingly, I just found THIS article about escaping the full mount and it mentioned the hip thrust). But Ken didn’t bother trying; he just laid there getting pummeled.

As a CSCS, I immediately started pondering ways to train and strengthen the bridging pattern. In addition to wanting to add extra loading, I also wanted to find a way to add extra ROM. Several ideas came to mind. I quickly dismissed the notion of conducting “partner-assisted” training, as it’s not exactly “socially acceptable” to approach another man at the gym and ask, “Hey bro, will you straddle me while I thrust you up and down for 20 reps?” Maybe this is okay with your significant other behind closed doors, but not in the weight-room – nobody wants to see that!

Another idea came to mind and I ventured into my garage, where I had a stellar garage gym. I decided that I would drape my back against a glute-ham developer and place my feet against a reverse hyper, all while having a weighted dip-belt suspended from the hips. The extra height would be needed to allow the weight to sink down beneath the hips. 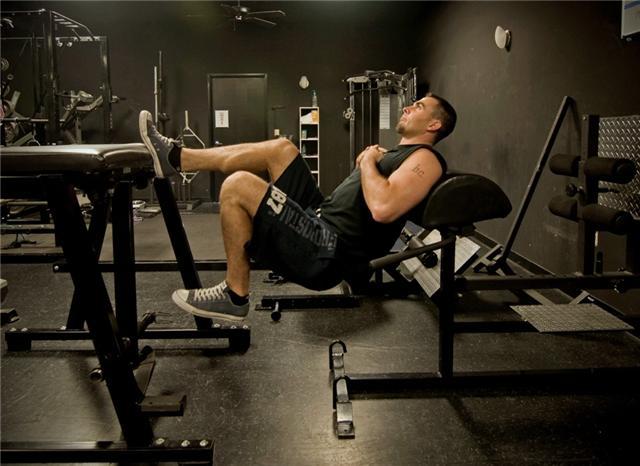 The original idea was sort of like this, but with two legs, a dip belt, and four 45 pound plates suspended underneath

I asked my girlfriend at the time to come outside and help me move the glute ham developer and reverse hyper, and she was thoroughly annoyed. In fact, she quickly marched inside because she was enjoying her Tuesday night on the couch and couldn’t understand why this couldn’t wait until the following day, thus leaving me all by myself to manipulate the heavy equipment. I persisted and within 10 minutes, there I was, back against the glute-ham developer, feet against the reverse hyper, with 4 plates (180 pounds) suspended via a dip belt underneath my hips. I started the set, and after 10 reps my glutes felt a burn I’d always sought in the weightroom but hadn’t ever been able to achieve. The smile on my face quickly eroded at 15 reps when I nearly pulled my left glute. At this point forward, I knew that I had to teach my fellow brethren all about this magnificent glute exercise as to that day, I’d never felt anything work my glutes before to that extent.

I started prescribing it to clients and it was an instant favorite. I can’t tell you how many times I was asked, “Can we do that special glute exercise today?” At this point I stuck to high rep bilateral hip thrusts, moderate rep single leg hip thrusts, and dumbbell hip thrusts with 25-100 lbs (but I’d use two 100-lb dumbbells and position them pointing upwards on my hips, as I was the strongest out of my clients and training partners).

I then decided to make a machine that would allow for convenient hip thrusting. Within two months, I had a logo, prototype, and completed patent application. Within five months, I had a comprehensive EMG study conducted by a reputable biomechanics lab showing that hip thrusts greatly outperformed squats and deadlifts in gluteus maximus activity and that single leg hip thrusts greatly outperformed lunges in gluteus maximus activity (click on this link to access that report: Hip Thrust Report 2007). The first prototype was a good start, but it didn’t adjust well, the foot padding eroded over time, and the band tension was tricky to get right. 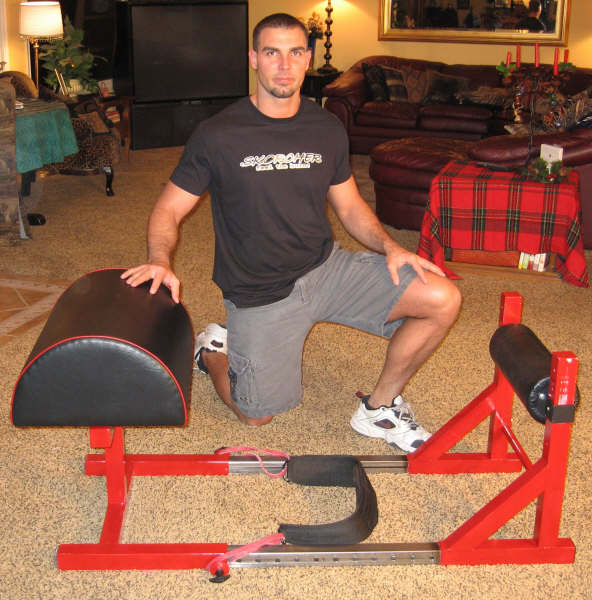 My next prototypes were much better, but they weighed a ton and costed a lot of money to manufacture. The band hip thrust off of “The Skorcher” was incredible.

However, using a barbell was only convenient if you had spotters. Getting into position was highly challenging if you were training alone. Case in point, see below.

To make a long story short, Skorcher didn’t pan out, I learned how to conduct EMG on my own because I wanted to conduct more experiments (especially with heavier loading), I realized that one could hip thrust off of a standard bench (at that point in time, my clients, training partners, and I always used the Skorcher and never considered using a bench), I wrote an eBook, started up a blog, wrote an article for TNation (Dispelling the Glute Myth), and taught the world to hip thrust with a barbell and a bench.

Who is The Founder of the Barbell Hip Thrust?

Now, I’m certain that there were plenty of coaches who thought up hip thrust variations before me. Being an aficionado of the history of physical culture, I’m interested in finding coaches, lifters, and scientists who were recommending hip thrust variations before me. I’ve seen variations from Yuri Verkhoshansky, Mel Siff, and Tudor Bompa (I even re-drew their images and posted them on my blog three-and-a-half years ago HERE). I’ve heard plenty of anecdotes from athletes whose coaches prescribed them decades ago. And I’ve seen pictures of lifters either elevating their backs onto something or putting extra loading on their hips while bridging. But I’ve never seen any pictures or videos of heavy barbell hip thrusts “pre-Bret Contreras era”; if I did, I would love to give credit where credit is due. At any rate, here is the evolution of modern bridging and thrusting, post Youtube era.

When I came onto the scene and started recommending more challenging variations, it sparked considerable innovation within the strength & conditioning industry. We not only pushed the limits with barbell loading, but strength coaches and personal trainers started thinking up nifty, useful variations on a weekly basis.

Even Jesus is now doing hip thrusts at Muscle Beach

Getting the bar into position with lighter loads

Getting the bar into position

Getting the bar over the thighs (for muscular guys)

Even more hip thrust (this is an amazing tutorial)

As you can see, the glute bridge has come a long way! The starting point is still the bodyweight bridge – either on the floor, with feet elevated, or with shoulders elevated. But the ending point involves crazy one legged variations and bilateral thrusting with several hundred pounds! As a matter of fact, one woman has now hip thrusted 500 lbs and a few men have hip thrusted over 700 lbs!