Last week I wrote a popular blog on knee valgus HERE. The post was very well-received, but I feel that I need to elaborate to keep driving this home to personal trainers and physical therapists. We pretty much have a knee valgus epidemic plaguing the entire world right now, and it’s not very hard to fix if you know what you’re doing.

Case studies have many drawbacks, but they can be very helpful for providing practitioners with methodology that they can integrate into their systems. There are many different ways to go about correcting knee valgus, and below is one approach that I’ve found to be highly effective.

A few weeks ago I trained a newbie who had been experiencing issues with lower body training. His personal trainer had him doing squats, leg presses, and lying leg curls. Every single time he performed a set of squats with sufficient intensity, he’d strain his left adductor. In fact, he’d trained his lower body six times over the past six weeks, with each session resulting in a strained left adductor. Each session, this would occur on the very first set of squats, so the trainer would have him move to leg presses and leg curls while stretching his adductors in between sets.

His personal trainer is the type who starts everyone out with barbell squats and just has them go down as far as they can without really monitoring depth and form. This client was definitely not ready for barbell squats – especially not with 50 extra pounds on the bar (for a total of 95 lbs). Moreover, the leg presses would still irritate his adductor (just not to the extent of squats), and the adductor stretching was exacerbating the situation.

The gentleman was aware of me and had seen some of my articles online, so he decided to track me down, knowing that we both lived in Phoenix. Interestingly, the gentleman informed me that he used to be a mogul skier and that back in the day they’d do squats with their legs banded together. The client ended up visiting me three times and his issue is completely resolved. Due to financial issues, the client could only see me once per week and wished to solve the issue in as little number of sessions as possible.

I watched the client squat and saw that he collapsed at the knees (valgus). His left leg caved inward more than his right leg. I put him in side lying position and manually tested his hip abduction and hip external rotation strength balances. Predictably, he had a marked strength imbalance with the left side being weaker than the right in both positions.

He could indeed achieve full range squats with proper foot and ankle position when coached properly, so ankle dorsiflexion and hip flexion mobility weren’t culprits; just insufficient hip stability and lack of knowledge of proper form. These types of individuals are usually pretty easy to fix.

I showed him how a squat is supposed to look and had him mimic the form. I then had him hold onto a 15 lb dumbbell in the goblet position and saw that he was able to keep proper form for 8 repetitions. From time to time his left knee would want to creep into valgus, but I’d be sure to remind him to push the knee outward. I moved up to 25 lbs for goblet squats, and this seemed like the perfect load for him on that particular day. He did a total of 3 sets of 8 reps, staying far away from failure to ensure that his left adductor didn’t flare up. I filmed his sets and showed them to him immediately afterward and provided feedback so he could visually see what was going on, which leads to much quicker correction.

Next, I put him in a prone position to see if he could squeeze his glutes properly during an RKC plank. He couldn’t even turn them on. I modified the position and had him perform RKC planks from the knees with a wider hip stance. He was able to turn them on from this position, but they glutes would flutter, which is indicative of weak glutes and common in beginners. Finally, I showed him how to perform bodyweight hip thrusts. He could squeeze out 15 solid reps with good form, after 15 reps he’d start compensating with anterior pelvic tilt to make up for subpar glute strength. He performed 2 more sets of 15 hip thrusts. So the session looked like this:

My findings for the first session were that the client possessed weak glutes in hip extension and posterior pelvic tilt along with a left side upper glute imbalance in hip abduction and hip external rotation.

I had the client stop stretching his adductors. I taught hip how to perform band seated hip abductions, band monster walks, and band sumo walks. Furthermore, I gave him a mini-band to take home. Last, I told him to stop training lower body with his personal trainer until I could get his squat form squared away.

His homework was to perform the exercises below each day until we met again the following week:

I then went over hip hinging drills and moved onto Romanian deadlifts. The client did two sets of 20 reps with the barbell and one set of 10 with 95 lbs. So the session went like this:

His homework was to perform the exercises below each day until we met again the following week:

I included goblet squats in the warm-up and double-checked form, which made me decide to move him to barbell front squats. Client was able to do the bar for 10 reps, 65 lbs for 10 reps, 85 lbs for 10 reps, and 95 lbs for 5 reps. Form was absolutely perfect, and there was no adductor pain or discomfort whatsoever.

Since the client’s adductor strains had completely vanished and his form was picture perfect, I released the client as my job was finished. However, I spent a good amount of time with him before we departed.

I filmed video clips of his front squat, hip thrust, and Romanian deadlift form and emailed them to him. I told him to continue to film his training sessions each month and to compare his form to the form exhibited in the videos I sent him.

I told him to continue performing 20 minutes of extra glute work 2-3X/week in the form single leg hip thrusts, hip thrusts, Bulgarian split squats, box squats, goblet squats, single leg RDLs, RKC planks, Pallof presses, lateral band walks, and band seated abductions. We went over form on each of these drills to make sure he understood how to do them.

I told him to keep performing front squats, back squats, deadlifts, sumo deadlifts, hip thrusts, and barbell glute bridges for his main exercises. We went over form on these lifts too.

Finally, I sent him YouTube links to the various exercises so he could watch them as a reminder to what good form entails.

This goes to show you, with a highly motivated client and good strategy, it is possible to see rapid, life-altering changes in movement and function. 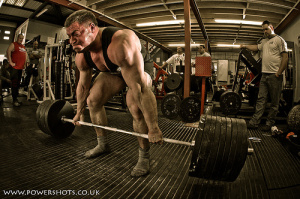