1. What are Energy Leaks?

Mike Boyle’s definition: Energy leaks are points at which energy is lost during the transfer of force from the ground. Energy leaks are a result of the inability of the body to stabilize a particular joint.

Here’s an example: Let’s say someone attempts to perform a squat or deadlift and their knees cave inward during the movement. Or, let’s say an individual’s back rounds during a deadlift. These would all be examples of energy leaks.

2. What are the Various Forms of Isometric Training?

I learned most of this through Christian Thibaudeau.

There are two main types of isometrics:

These can be done via several different styles:

1. Hold for max duration (see how long you can hold the position without breaking form – yielding iso’s are best for this purpose)
2. Produce max isometric effort (push or pull as hard as possible regardless of the amount of time it takes to build up to it – overcoming iso’s are best for this purpose)
3. Produce max isometric power (build up to near max tension as quickly as possible then release – overcoming iso’s are the method of choice for this purpose)
4. EQI’s (Eccentric quasi-isometrics) – hold a mid-range position while contracting the agonists as hard as possible, as the muscles fatigue they pull you into a deeper stretch thereby adding stability to flexibility (to be used with yielding isometrics)
*some believe that EQI’s are performed by starting in the stretched position and contracting the antagonist as hard as possible to facilitate a further stretch and release tension on the agonist which is really a technique used in “Active Isolated Stretching”
5. OI (Oscillatory isometrics) – hold a position and “bounce” up and down using small amounts of movement in order to contract and relax muscles thereby addding in a small dynamic concentric/eccentric component (to be used with yielding isometrics)
6. Iso-Ballistic – alternate periods of explosive activity with isometric activity

Designing Back Exercise: From Rehabilitation to Enhancing Performance

A Closer Look at Cortisol and Bodybuilding

Why Your Muscles Get Sore: Delayed Onset Muscle Soreness (DOMS) and Exercise

5. What are Serial Distortion Patterns?

If a misalignment exists in one segment of the kinetic chain, predictable patterns of dysfunction known as serial distortion patterns throughout the entire kinetic chain will ensue, which compromise the body’s structural integrity both above and below the misaligned segment.

In other words, if you have an unstable or immobile joint somewhere in the body, you’ll likely develop problems in other joints as the body is an inter-connected unit. For example, let’s say you have weak upper glutes (at the hips) which cause your knees to cave in when you squat (like in the picture above). Although the problem exists at the hip, you will likely experience pain at the knee. For another example, let’s say someone has tight hamstrings. Everytime this individual bends over to pick something up he or she will be forced to round his or her low back to compensate for the inflexible hamstrings. Although the problem is at the hamstrings, this individual will likely experience low back pain. The dysfunction becomes a serial distortion pattern when it starts manifesting itself in multiple areas throughout the body.

6. When you Have Time, Watch this 45-Minute Lecture on Static Stretching by Professor Doug Richards. It’s Great!

There seems to be a lot of confusion regarding static stretching these days. This lecture should clear up any misconceptions. Here are some notes I took from the lecture:

• Elastic deformation goes back to normal
• Plastic deformation leads to permanent changes
• Stiffness is the slope of load-deformation graph
• Range is how far something can stretch before it breaks
• Strain is the % of original length before it breaks
• There exists an elastic range and a plastic range
• Collagen structures including ligaments and fascia, bones, cartilage, and tendons have 3-5% strain before they start to break and 7-10% strain before they break. Muscle has a 10% strain before it starts to break
• Brittle – no plastic range (glass)
• Ductile – opposite of brittle (metal)
• Human tissues are in between brittle and ductile
• Elastics behave instantly
• Human tissue is semi-fluid (water content) and has viscosity – doesn’t change instantly, our tissues are visco-elastic (like door with spring and damper)
• First-order loading – like door shutting with spring and damper – goes quickly at first then slows down as door approaches neutral position, same with muscles, stretch goes quickly at first, then slows down (half-life 50%, 75%, 87.5%,…)
• Creep is gradual deformation (elongation), McGill found that over 20 minutes of bending spine gained 5 degree of creep, matched first order equation, would need 45 minutes to an hour to reach full range, lost all creep in less than 20 minutes (elongation was lost quicker than it took to gain)
• Normal range vs. hypermobile, joint play or laxity is in unnatural range (bad is instability)
• Not enough flexibility – short, not to be confused with stiff
• Stretching over and over consistently will increase muscle length (actual sarcomeres added in series)
Stretching doesn’t change stiffness, if you change the length of a muscle, you change the sweet spot in which it generates force, *must take that into account when programming ex) a cyclist should have short hip flexors (what is optimum range of motion for power production for a specific task?)
• Stretching reduces pain sensation and allows more ROM without effecting load-deformation or stiffness profile (can be good or bad)
• Stretching is very specific to sport, human, activity, joint, etc.
• Stretching can be good or bad
• Sitting is stretching and is dangerous – stretching your back
• Focus on technique, nerves and vessels could shorten and restrict mobility – use it or lose it – stay active and flexible, bend correct segment and protect back and shoulder when stretching
• Research on stretching is all over the place, we really don’t know a lot 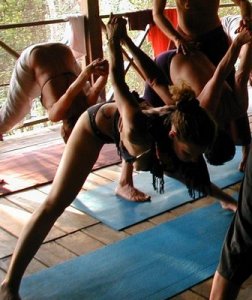 I need to go to this gym so I’ll be enticed into stretching more often!

I wrote about this in my interview with Tony Gentilcore. Here is what I believe to be the optimal “phases” for developing a garage gym. If all you ever get to is phase one, you’ll still be set for life. Everything else is just icing on the cake. Obtaining all the equipment in the four phases would probably require a 4-car garage, but this is a “Dream Garage Gym,” so deal with it!

By the way, I already have most of this stuff and find nearly all of it quite useful in order to perform all the variations of exercises that I like to do.

9. Read Dan John’s Excerpt. This is an Awesome Read!

When you think about going for the quick fix, just quickly run this simple paradigm through your head. It all relates to time for adaptation. Nothing complicated. Don’t over think this. This is a just a general guideline, a reminder, that the process of adaption to training takes time.

• Flexibility improves day to day
• Strength can be improved from week to week
• Speed (A fine motor quality) improves from month to month
• Work Capacity improves from year to year
• Based on the law of reversibility
• You can lose flexibility from day to day
• You can lose strength week to week
• Speed declines month to month
• Work Capacity declines year to year.

How can any supplementary exercise ever be specific? Every such adjunct resistance exercise will always be non-specific as far as the actual pattern of sporting movement is concerned. The most that we can refer to are exercises that display a high causal correlation with improvements in sporting performance, not exercises that are specific to training the movement patterns of a given sport. If we had to apply the principle of movement specificity, then we would have to jettison all strength training and rely on the sport alone to enhance the necessary sporting skills. The only truly specific training activity is the sporting movement itself.

In other words, what you are really implying is that all supplementary training might well be redundant because only completely “sport specific” training will enhance performance. The problem is that the concept of sport specific training is really getting a bit out of hand. There are several forms of specificity and it is highly misleading to talk about “specificity” as some sort of single quality that characterises each sport. As I discussed in detail in Ch 1.4 “Supertraining” (2000), the main forms of specificity involved in sport are:

It is important to note that, in the context of training, specificity should not be confused with simulation. Specificity training means exercising to improve in a highly specific way the expression of all the above factors in a given sport. While simulation of a sporting movement with small added resistance over the full range of movement or with larger resistance over a restricted part of the movement range may be appropriate at certain stages of training, simulation of any movement with significant resistance is inadvisable since it can confuse the neuromuscular programmes which determine the specificity of the above factors.

Even if one is careful to apply simulation training by using implements or loads that are similar to those encountered in the sport, there will usually be changes in the centre of gravity, moments of inertia, centre of rotation, centre of percussion and mechanical stiffness of the system which alter the neuromuscular skills required in the sport.

There is also far too much misunderstanding of what “sport specific training” and “functional training” are. First of all, they are not the same concept, even though most fitness gurus appear to be using them synonymously. As I have stated before, even general physical preparation (GPP) exercises, just like specific physical preparation (SPP) exercises, can have sport specific objectives. In stating that, I posed this other question: “Are there ANY exercises that are not functional in human movement and sport?” Note that, in asking that question, I am not stating “non sports specific.”

I don’t know where I got this, but it’s a good summary:

I’ve been watching sprint coach Dan Pfaff videos for the past couple of weeks and he often speaks of a four part process in the training cycle:

He explains how any stress needs to go through these four phases and that strength coaches often keep pushing the envelope with strength and progressive overload without allowing for the third and fourth steps to occur. I remember Charlie Francis alluding to the same thing; needing to blend the new motor abilities gained (strength, power, flexibility, etc.) into the skill (sprinting, throwing, jumping, etc.). Pfaff states that there isn’t a clear-cut process for this model and that sometimes the four processes can occur overnight, while other times they can take much longer. It all depends on the stressor. Just something to think about in sport-specific training.

The Twin Experiment: A Tale of Two Types of Strength Training Regimens

The Twin Experiment: A Tale of Two Types of Strength Training Regimens