I’ve got a bunch of these ready to go so I’ll just keep cranking them out several at a time.

As a former math teacher, I like to break things down mathematically. According to most authorities on Vitamin D, you’ll get around 10,000 iu’s of Vitamin D production in around 10 minutes of summer sun exposure if you’re wearing a bathing suit. This breaks down to around 17 iu’s/second, or 1,000 iu’s/minute.

The Food and Nutrition Board at the Institute of Medicine of The National Academies has established the following adequate intake levels of Vitamin D.

Most nutrition experts believe these levels to be far below the optimal level and recommend around 1,000 to 2,000 iu’s per day. Bottom line, get some sun from time to time! If you’re never in the sun then take some Vitamin D supplements! Vitamin D is extremely important!

Hypocaloric diets are great for fat loss, but taking insulin dynamics into account and manipulating carbohydrate intake accordingly will yield better results according to this study.  Many people are severely insulin resistant because they consume too many carbohydrates or they have poor genetics. We saw from the “Twinkie Diet” that just reducing calories led to considerable weight loss and surprisingly favorable effects on cholesterol. But for optimal health you need to consider things like insulin sensitivity, protein, essential fatty acids, vitamins, minerals, and polyphenols, in addition to caloric intake.

When I was a teenager, I used to stand in front of the mirror and practice “posing.” I would take my shirt off and flex my muscles in the mirror. I remember finding it very hard to contract certain muscles such as my lats and hamstrings. I probably flexed my muscles in the mirror for around five minutes several days per week. Within a few months I was able to contract all of my major muscle groups really well.

When I get new clients, I’ll often ask them to contract a certain muscle or muscle group and I find that they don’t know how to contract it. Bodybuilders talk about forming an intense “mind-muscle connection.” Strength coaches and physical therapists talk about “activating” dormant muscles. In Supertraining, Mel Siff defined flexing or posing as a viable training method called “loadless training” and postulated that it had certain benefits. I’ll tell you one thing; if more people practiced flexing their muscles we wouldn’t have all of these dormant muscles and we wouldn’t have to coin certain terms such as “gluteal amnesia.”

Bottom line – don’t be afraid to practice flexing your muscles. I still try to do it a few times per week in the mirror for around 60 seconds or so. I’ll roll through several different poses and make sure that I maximally contract all the major muscle groups – the calves, hamstrings, quads, glutes, abs, lats, pecs, delts, bi’s, and tri’s.

A couple of weeks ago I received a text message from one of my online clients. This is what she said:

“I was screwing around (I shouldn’t be) and tried the whole stack on the glute press. Did 170 lbs each side for 6 reps ;)”

Leave it to one of my clients to have stronger glutes than most males! How could I be mad at her for not “sticking with the program?”

5. Chalk One Up for Eccentrics!

Here’s a cool study I stumbled upon that shows the benefits of eccentric training:

Short-term strength training and the expression of myostatin and IGF-I isoforms in rat muscle and tendon: differential effects of specific contraction types

Here’s a quote from the authors:

“In conclusion, we have demonstrated that short-term training increases tendon levels of both IGF-IEa and MGF mRNA, indicating a possible role for these growth factors in the adaptation of tendon to training. Furthermore, we found that eccentric training was more effective in downregulating myostatin expression than other loading types, and in combination with the effect of eccentric loading on IGF-IEa and MGF expression, this may well explain the strong contributions of eccentric actions in resistance training-induced muscle hypertrophy.” 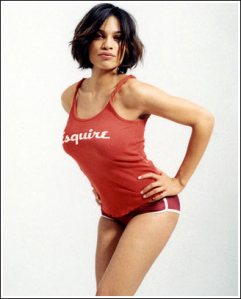