This comes from page 64 of my glute eBook, Advanced Techniques in Glutei Maximi Strengthening. I thought my readers who have not yet purchased the eBook would find this interesting. Mel was years ahead of his time. The question is, what are you doing in your strength training to increase your horizontal force production in the hips? [hint, hint: hip thrusts!] Note that the pictures below (which I redrew from Supertraining) are the beginnings of the hip thrust evolution.

And probably the best analysis of load vector comes from the great Mel Siff in his legendary book Supertraining. Here are a series of quotes from Siff:

“In some events, such as swimming, inertia plays a major role in the entire process, unlike in running, where the specificity of movement depends on horizontal thrust and the vertical oscillation of the athlete’s center of gravity.”[i]

“To fulfill the criteria of correspondence with respect to the amplitude and direction of movement, it is advisable to select the exact starting position and posture of the athlete, as well as to calculate the direction of action of the forces associated with the working links of the system and the additional load. The line of action of the applied external resistance and of the loaded movement as a whole must also be taken into account.”

“For example, in middle-distance running, skiing and skating, a knapsack full of sand or a weight belt are sometimes used as resistance. However, the muscles which bear the load are those which resist the weight of the body. This can increase the ability to cope with vertical loading and develop general strength-endurance, but does not strengthen those muscles which propel the body horizontally.”

“Similarly, a skater may execute jumps on one leg on the floor or from a bench. These exercises strengthen the leg muscles supporting the body and the static-endurance of the back muscles, but do not fully imitate the working of the muscles for the push-off, where the force is directed backward.”

“Skaters should use another method or resisted movement by changing the direction in which the force of resistance is acting. [Figure showing three different towing methods; 1) towing a human, 2) towing a weighted sled, and 3) towing a sled with a human sitting on it while skating] These methods to a large extent match the training exercise to the dynamics of the sport specific actions.”[ii]

“The strength exercise should not only reproduce the full amplitude of the movement but also the specific direction of resistance to the pull of the muscles.”[iii]

Siff then explains how sport typically involves simultaneous coordinated tension of muscle groups, such as the simultaneous flexion and extension at the two hip joints in running, where the angular movement of one leg enhances the push-off movement of the other. [He depicts the following exercises, which he credits to Verkhoshansky in 1977, to illustrate complex exercises for simultaneous strengthening of the hip flexors and extensors, and knee extensors.][iv] 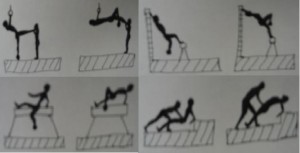