Today’s post is a guest-blog by a talented young writer by the name of Aris DeMarco. I don’t know if you’re like me, but I freakin’ love this stuff. Enjoy!

Ever since the primitive beginning of heavy athletics and strength sports, there has been the simple question “who is strongest?” And while the quest to define a single ‘strongest man ever lived’ may be a fruitless one, there are quite a few names that should be brought up in such a discussion—Marvin Eder’s is one of them. Pat Casey, the first man to bench press over 600 pounds, said that “pound for pound, Marvin Eder was probably the strongest man of all time.”

Eder was something of a tragic figure in the world of physical culture, due to his early retirement from strength sports at age 23. His short-lived career, however, only makes his tremendous accomplishments that much more impressive. Never weighing more than 200 pounds, he was a top tier Olympic lifter and bodybuilder, and had enormous strength in a number of uncontested ‘odd’ lifts. 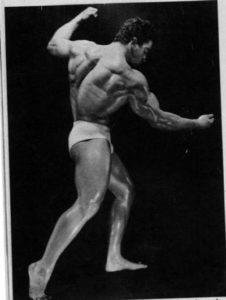 Weights or bodyweight, barbells or dumbbells, high or low repetitions, Eder did it all and did it frighteningly well. His pressing strength and endurance from all angles was nearly otherworldly—he overhead pressed 330 in competition as a middle-heavyweight when Jim Bradford, a 270-pound superheavyweight, held the world record with 370. Eder became the first man under 200 to bench over 500, did a parallel bar dip with over 400 pounds of extra weight, 25 handstand pushups on a horizontal ladder, side pressed a 120-pound dumbbell for 50 repetitions and managed a crucifix hold with a pair of 100’s. According to David Gentle, Eder could squat 475 for multiple sets of 10 in a normal training session; Eder himself claimed that he squatted 300 for 50 and deadlifted 665 “like an afterthought” after one training day. The rest of his lifts were equally impressive—he split snatched 265 in competition with poor form, almost muscling the weight up; strict curled over 215 on a straight bar at an exhibition, did 8 one-arm chins with each arm (some training partners say that they saw him do 12 or more) and 80 wide grip pullups, and performed a straight-arm pullover with 210 pounds. These are staggering numbers, especially when one considers that they were all accomplished by an athlete normally weighing 180-190 pounds. 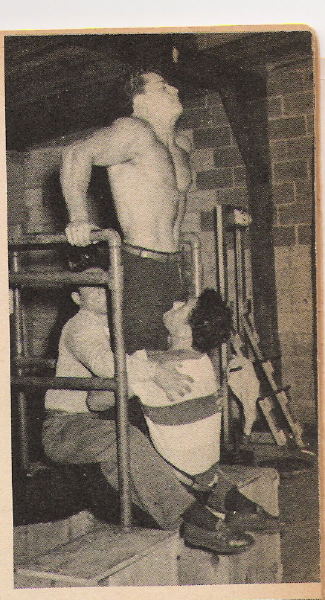 These guys are really good sports!

Doing all of this, in the pre-steroid era, before even turning 25 clearly marks Eder as a genetic marvel—a very, very gifted athlete. Eder himself said when speaking with Gene Mozee, “I was blessed with God-given strength”, and in a 2007 interview with David Robson noted that “I had enormous recuperative powers and was always ready for the next workout” and that he was “not at all” an average person. Obviously, attempting to copy Eder directly would not be wise, and certainly would not get a trainee nearly the same results. However, there is much we can learn from Eder and his training methods, especially because his abilities as an ‘all-rounder’ are undoubtedly something for any lifter to aspire to. Having looked over many of his interviews, anecdotes and routines, I think there are a few lessons that can be taken away from Eder himself.

Unless you yourself are an elite level competitor in a certain strength sport, there’s no reason to have tunnel vision and limit your focus to just the powerlifts, or the Olympic lifts, or anything else specifically. One thing that many of the best lifters from the 1890s all the way through the 1960s seemed to have in common was their willingness to experiment, and develop their own favorite lifts in addition to whatever they had to do for competition. There’s definitely something to be said for that jack-of-all-trades mentality, developing all-around power and general rather than purely specific strength. And though Eder was a competitive Olympic lifter he also did plenty of heavy benches, laterals, curls—which doubtless helped him in his bodybuilding career—along with his heavy chins, dips, and occasional phases of high rep training. “I sometimes felt like doing high repetitions in the deep-knee bends,” Marvin said in his 2007 interview with Dave Robson, “so I did sets of 50 with 300 pounds and I would do side presses with 120 pound dumbbells, sets of 50 on each arm….” Clearly, this sort of ability with varied lifts in different rep ranges can’t be attained by sticking stubbornly to just one type of training or only a few lifts. 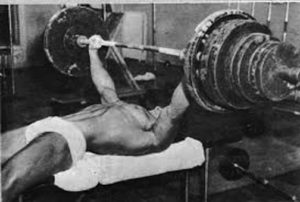 This may seem somewhat contradictory to the first point, but it’s important to focus even when more variety is incorporated. Looking at Eder’s own training, it’s apparent that in addition to the three Olympic lifts (press, snatch, and clean-and-jerk, at that time) he liked squats, benches, chins and dips, along with curls and laterals. Prioritizing that handful of lifts for years, for low or high reps, through many changes in routine, is what gave Eder the sort of all-around power apparent from seeing his records. I believe that focusing on progression continually with any chosen lifts, even through changes in routine, is a very important piece of common sense that some lifters miss. It seems that quite a few trainees change many of their goals every time they alter their routine—but no one will have really impressive numbers without actually concentrating on a particular lift for at least a few years. So focus, even when diversity is incorporated, is very important. Eder definitely didn’t throw random lifts together for his training, he stuck with a fairly short list of his own favorite exercises along with the ones he competed in, and took them as far as possible over a long period of time.

Eder reportedly trained like a maniac, saying that Reg Park “was one of the few guys who could keep up with me.” Reg was himself a tremendous lifter as well as a champion bodybuilder—Schwarzenegger’s original role model, in fact—and he too was known to train at a very fast pace. That he and not many others could keep up with Eder is proof of the intensity that Marvin brought to the gym. Eder also incorporated very high volume in his training, saying to Dave Robson that “at one time I would train six or seven hours a day and the number of sets sometimes went up to 15 per body part….” For a drug-free lifter, even one with well above average recovery abilities, this tolerance for heavy training must have been built up over time. Eder explained that “at the beginning I trained every other day. Then as I advanced I would do split training: upper body one day, legs and midsection the next day. Then as I advanced beyond that I started to do Olympic lifting along with the training and at that time it went to four times a week….” 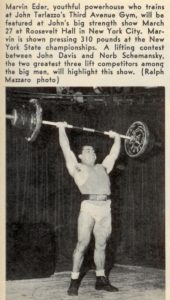 Here’s one of Eder’s more basic routines as explained to Gene Mozee: The whole body is trained every session, 3 days a week on alternate days.

Sets and reps for the above done as follows. Do 3 sets of 8 with a straight weight for the first two weeks, then 4×6 for another two weeks. Deload for a week, then do 5×5-7 for a month, deload another week, then 3×3-5 for a month followed by 3×6-8 for a month. Rest as long as necessary between sets and warm up well, and try to eat 1.1 grams of protein for each pound of your own weight.

After those basic full body routines, as Eder said, he switched to an upper/lower split approach. One of his press routines from this period, according to an article by Paul Waldman:

According to the article, “Marvin’s press has usually increased about 15lb every 6 months. As of February 1953, his best press, at a bodyweight of 198 pounds, was 340 pounds.”

Eventually, Eder moved on to his preferred four-day split, two on one off.

“Train consistently and use whatever set and rep scheme you feel comfortable with.”

This was apparently when Eder really began ramping up the total volume and workload on his primary lifts. Reps and sets ranged from 5×10 to 10-15 sets of lower reps, to the aforementioned 50-rep sets on some exercises, maybe higher volume for the chins, dips, and abs; or even the occasional grueling 7-hour session as Eder mentioned to Robson. 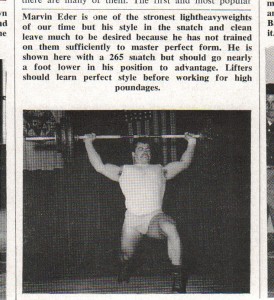 As you can see from these routine examples, Eder built himself up and conditioned himself to train hard and heavy and high volume, over a long period of time. Again, he was no average lifter but he is proof that a natural trainee can adapt to seriously high workloads in the gym, given enough time and dedicated work.

Even with an emphasis on heavy training, it’s important to keep some endurance or conditioning work in the mix. This doesn’t mean throwing circuit training or long runs or HIIT in after every lifting session, of course. Eder said that he didn’t really do much in the way of cardio, but “very often weight training was done at a rapid pace with very little rest between sets. And this depended on the type of training I was doing. So we might have considered it aerobic when I did it that way.” One example of Eder’s intensity was when he decided to break Jack Lalanne’s record for the fastest time doing 1,000 parallel bar dips. Jack had done it in 20 minutes… Marvin ground the thousand reps out in just 17 minutes! That sort of training, along with his 50-rep squat and press sets, show how variety and endurance work can be incorporated into a strength based routine. Long after his official retirement, in his 60s and 70s Eder still did very high rep workouts, including 500 consecutive split squat jumps or 500 crunches in addition to other calisthenics, and powerwalking—he believes that light endurance type training is most important for the older trainee.

This may seem obvious to some readers, but keeping personal satisfaction and health as the primary concerns is a key aspect of anyone’s training. In his interviews, Eder repeatedly stressed that “health was never divorced from my training… above all, have the goal of good health.” According to him, the stronger he got the healthier he felt. He also emphasized his distaste for chemical enhancements—which were just starting to come into play in sports when he retired. Eder noted that his training was for its own sake, and though he enjoyed competition he was not one to obsess over records or recognition. Even when he was banned from amateur competition due to some professional involvement, he overcame disappointment by saying, “they denied me, but I had the sheer joy of doing it and that sustains me.” I have always firmly believed that doing something just for its own sake is the most powerful motivator and Eder certainly exemplified that. His ‘lifting advice’, was simply: “enjoy the feel of the steel in your hands, but struggle to get it overhead. Make contact with that. Build yourself up in that manner and you enjoy it for the rest of your life.”