How to Increase Your Bench Press

“How much ya bench?”

If you’ve spent any more than a month in the gym, chances are you’ve been asked or have at least heard the phrase “how much ya bench?” The bench press is a strength staple and is considered one of the ultimate measures of gym prowess. But despite it’s popularity, proper technique, and more importantly, how to increase numbers on the bench, seem to be somewhat mystified to the average gym rat. Most guys will get up to around 225 lbs by just going in and benching regularly, and those that get anywhere near 315 lbs are considered freaks at most commercial gyms. But it doesn’t have to be this way! You too can build a big bench if you follow some basic tenets.

In the powerlifting world, we see guys benching 2-3 times their bodyweight or more very regularly. And in the NFL Combine, we see guys out of college repping out 225 lbs for 20-30+ reps. What do these guys do differently? Sure there’s the issue of superior genetics and possible steroid usage, but I think there’s more to it. Good bench pressers tend to know proper set up and technique, which is where most lifters go wrong right off the bat. Don’t get me wrong, I’m not saying that all college football players are stellar benchers in terms of technique; far from it. However, the average gymgoer’s bench press form is absolutely horrific, so just having decent technique automatically confers a big advantage. Furthermore, good benchers tend to be more aware of specialized set and rep schemes, protocols, and programs. Way too many lifters enter the gym with a blind eye and have no real method to their madness; they simply lift as much as they can every time they go into the gym or perform the same load, set, and rep scheme week in and week out.

In this post, I’ll go over everything from proper setup and form to different methodologies for increasing either maximum strength (1RM) or rep records (think NFL Combine), along with who should be using them.

Grip width is going to be somewhat dependent on personal preference, but for our purposes let’s say somewhat narrower than what you may be used to. The traditional bodybuilding grip width where the arms are flared out to almost 90-degrees will definitely stress the pecs more, but this style won’t be optimal for building strength or sustaining shoulder longevity. Going too narrow can also bring your numbers down by taking the pecs out of the equation, however, the close grip bench press is a great support exercise for the standard bench.

From left to right: too narrow, too wide, just right 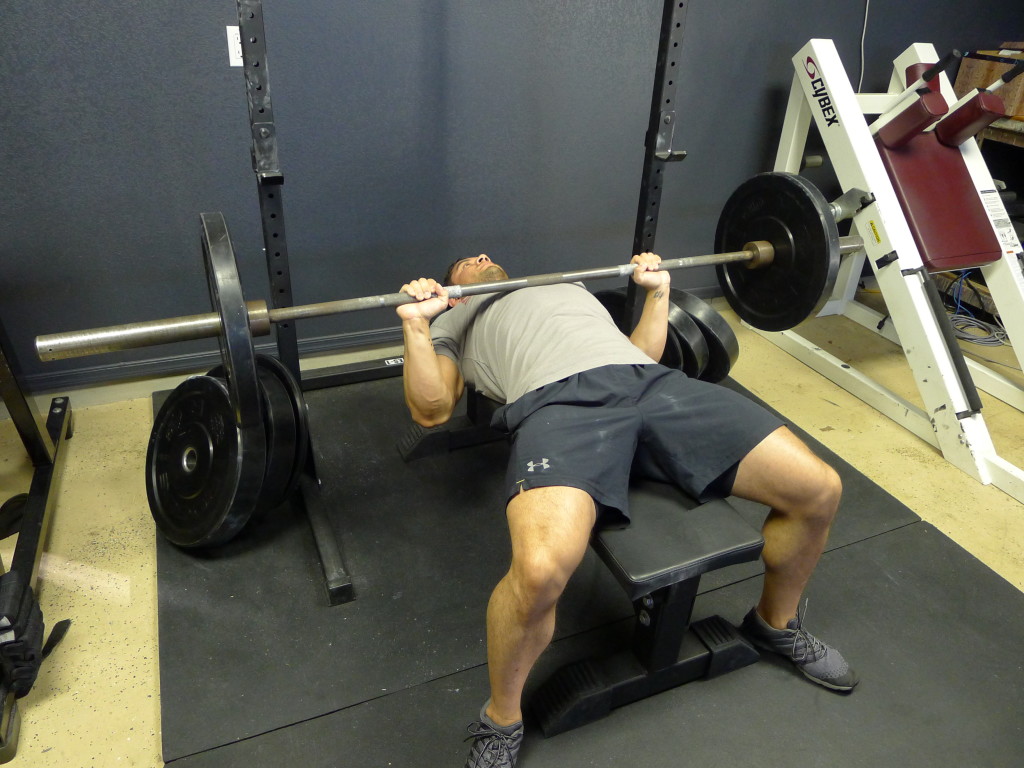 Scapular position is a commonly overlooked part of the bench press and one of the most challenging aspects for lifters learning the bench to maintain. You want to retract and depress the shoulder blades down into the bench. Think about rowing your shoulder blades back, screwing them into the bench, and keeping them there the entire time. You can do this by picking yourself up using the bar then getting them back and planting down on the bench, or by just working the blades back under you before unracking the bar. Make sure not to protract the scapulae or shrug the shoulders up during the movement, most people tend to do this at the top. Also, don’t allow the scaps to anteriorly tilt (shoulders round forward) – keep the chest up and the scaps stuck to the ribcage.

Keep the shoulder blades back and down and screwed into place, and keep your weight on the upper back throughout the motion. It should be mentioned that some powerlifting organizations are okay with the head coming off the bench, whereas others don’t allow it.

During the bench press, the chest is obviously the primary muscle at work (especially with the raw bench press), but the bench press is really a full body lift when it comes down to it. The feet should be planted down firmly and in full contact with the ground. And during the rep you should push your heels into the ground and create tension throughout the entire body, which brings up the next point

As mentioned, the body should be tense during the entire rep. In fact, many powerlifters believe that the set-up is more uncomfortable than the lift itself. Once the shoulders are planted down, the feet are in solid contact with the floor, and the buttocks is down on the bench, you’re ready for your first rep. After unracking the bar, take a deep breath, hold the air tight in your core, grip the bar firmly and push your feet into the ground to create body tension, otherwise known as staying tight. You do not want the legs to be squirmy during the movement. Tense the glutes and hold a strong spinal arch.

So how does the bar actually travel in space? Well, the most common mistake lifters make is that they come directly down to their chest which will force the elbows into that unwanted flair mentioned earlier. At the bottom of the lift, the bar should be positioned just below the nipple line. On the way up, the bar should travel in a slight arc and end directly above the nipple line at the top. Think of rowing the body to the bar at the bottom of the movement – this will help you hold the arch and lower the bar properly. Pause for a moment on the chest – this makes the movement more challenging but it will build a stronger bench in the long-run. When reversing the movement, think leg drive and think of pushing the body into the bench, away from the bar. This will help you raise the bar properly.

Your training regimen will be dependent on your individual goals. For example, if limit (maximal) strength is what you’re most interested in improving, then you’re going to have to lift heavy. However, if you’re looking to increase your repetition strength, you’ll need to utilize higher reps with lighter loads.

Maximum Strength (1RM) – Building maximum strength refers to increasing the total poundage someone can lift. There are several ways to go about this but just going into the gym and maxing out every week certainly is not one of them. If you max out every week, you’ll definitely build up some strength, especially if you’re newer to lifting, but after a while you’ll plateau and stagnate. That’s where specialized set and rep schemes come into play. Here are some favorites:

Rep Records – Rep records typically come to mind when training for events like the NFL Combine, the Tactical Strength challenge, or the SPARQ high school challenge, which each have a bench press for max reps component to them. Increasing your bench press rep record can also help with max push up tests which are required by the military, most law enforcement agencies, and anyone looking for a good ego boost.

Other Factors to Consider – While the bench press is primarily considered a chest exercise, strengthening some of the secondary muscles involved is crucial to improving bench press performance. The training of these secondary muscles is called support work. Optimal support work will be slightly different for each lifter depending on their strengths and weaknesses. The range of motion where the bar acceleration slows or stops for a particular lifter is known as the sticking point. Strengthening this range of motion can be beneficial. Alternatively, strengthening bottom position strength and lockout strength will benefit the bench press as well. In addition, strengthening the other muscles involved with the bench press will help improve strength, with the primary accessory muscles being the triceps, front delts, and upper back musculature.

How much support work you need will differ depending on strength levels and experience, but for the majority of lifters, two to three exercises performed for 8-12 reps is sufficient. A common mistake for beginners is to go overboard with support work, which impairs recovery ability. You want to stimulate, not annihilate. 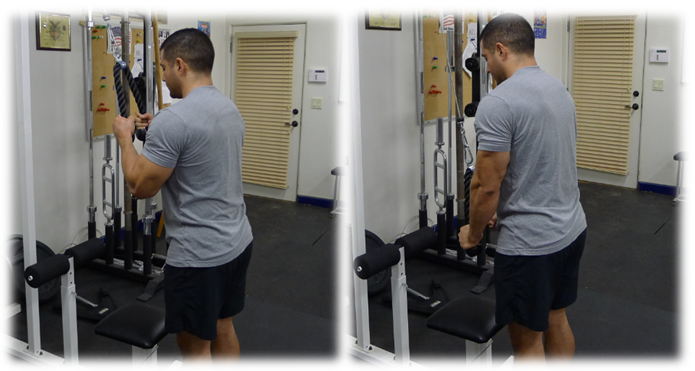 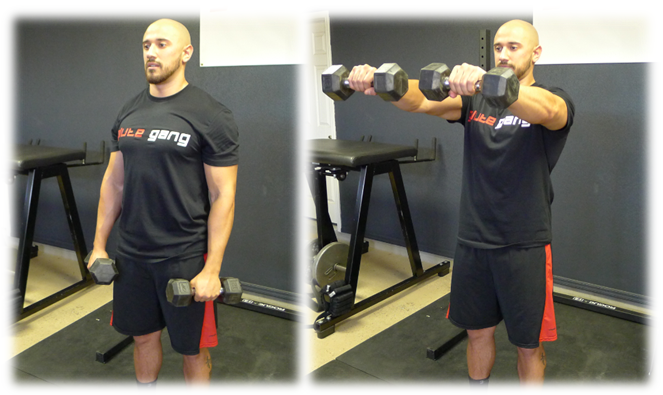 The methods you choose will depend on your training age, anatomy, and fitness level. If you’re just winging your bench press program, any of these methods will be superior, but it’s a good idea to use specific methods that coincide with your experience level for optimal results.

Beginners/Novice – For less experienced benchers, it’s a good idea to use techniques that allow the majority of the focus to be on form while still building strength.

Advanced – The techniques suggested for more advanced lifters will work for the novice and intermediates as well, but many of these techniques require the lifter to perform in an already fatigued state, so these are better used once form is already solid.

You’ll notice that many of the techniques that are reserved for more advanced lifters are geared towards increasing rep maxes. This not to say that these methods can’t be used for increasing maximum strength as well, quite the opposite. They can indeed be used very effectively for that as well, since strength endurance and strength can feed off of each other.

Another consideration is that the methods listed for novice lifters can still be used by advanced lifters to gain strength – in fact many successful powerlifters today stick to these staples. The big takeaway here is that beginners trying to increase rep maxes will make the best use of their time by increasing total strength first and more experience lifters will need to employ more specialized methods in order to make gains rather than just lifting heavy each time they train.

As stated before, you can only turn a strength task into an endurance task once the strength is present, not before. In other words, in order to perform something repeatedly, you have to be able to do it once, which is the premise of strength endurance. The same applies to power; in order to perform something explosively, you have to first be able to perform it slowly. Strength therefore lays the foundation for strength endurance and muscular power.

How to Increase Your Chin-Ups

How to Increase Your Chin-Ups