For many years, men have been using trickery in order to instantly appear more muscular and immediately boost sex-appeal. Our secret weapon is da pump (in Arnold’s voice). Before we hit the beach, or a pool party, or even a night-club in a tight-fitting shirt, you can bet your bottom dollar that we’ll be cranking out 50 push-ups behind-the-scenes prior to making our grand entrance. Women are no strangers to trickery – many ladies have utilized push-up/padded bras, corsets, and various other means for many years in order to boost your looks and self-confidence at a special event. However, what if you must make an appearance in a bikini? This is where men held the advantage with our pumping strategies – we discovered how to look good when we had to strip down. The most savvy males have certain exercises they use to pump the pecs, tri’s, bi’s, delts, and lats prior to a big event or a photoshoot. Now, most women aren’t concerned about pumping up their upper body muscles; they simply want their glutes to appear full and plumped. Well, the time has finally arrived. Ladies, you too can now utilize the pump for your benefit.

WTF is the Pump?

Before delving into pumping strategies for women, let’s discuss the pump. What exactly is going on physiologically? Here’s what The Hypertrophy Specialist Brad Schoenfeld had to say about the pump in my first interview with him four years ago in THIS T-Nation article:

Basically, the pump is caused by a buildup of fluid within the cell, facilitated by the accumulation of metabolic byproducts, which function as osmolytes. Studies show that intracellular hydration (i.e., cell swelling) can mediate hypertrophy both by increasing protein synthesis and decreasing proteolysis. Thus, there is a physiologic basis by which the pump may augment hypertrophy and it would be imprudent to dismiss this potential role.

Want some elaboration? Here’s Brad and my explanation two years ago from THIS T-Nation article:

Here’s the short course: During a moderate rep set, the veins taking blood out of working muscles are compressed by muscular contractions. However, the arteries continue to deliver blood into the muscles, creating an increased amount of intra-muscular blood plasma. This causes plasma to seep out of the capillaries and into the interstitial spaces (the area between muscle cells and blood vessels).

The buildup of fluid in the interstitial spaces along with the osmolytic properties of lactate creates an extra-cellular pressure gradient, which in turn causes a rush of plasma back into the muscle. The net result is that blood pools in your muscles, causing them to swell. Researchers refer to the pump ascell swelling.

This is what Arnold had to say about the subject in the immortal movie, Pumping Iron: “The most satisfying feeling you can get in the gym is ‘the pump.’ Let’s say you train your biceps. The blood is rushing into your muscles. Your muscles get a really tight feeling, like your skin is going to explode any minute. It’s like somebody blowing air into your muscles. There’s no better feeling in the world.”

Although many consider the pump a temporary condition that’s strictly cosmetic, this belief may be shortsighted. Studies have demonstrated that a hydrated cell stimulates protein synthesis and inhibits proteolysis (protein breakdown).

Understand that muscle hypertrophy is ultimately a function of protein balance – synthesize more muscle proteins than you break down and you’ll pack on size. The fact that cell swelling simultaneously increases synthesis while reducing degradation is a muscle-building home run!

What drives this swelling-induced hypertrophic response? Increased fluid in muscle fibers causes a stretch of the cell membrane, like an overinflated water balloon. The muscle, in turn, perceives this as a threat to its integrity and responds by initiating an anabolic signaling cascade that ultimately serves to reinforce its ultrastructure.

Unfortunately, no direct studies have attempted to investigate whether these anabolic effects are attained from pump-oriented training. Still, the implied evidence gives reason to believe that it very well may have a positive affect on muscle growth.

Usually targeted movements that keep constant tension on the muscle induce the pump. The occlusion and hypoxia created from “chasing the pump” has been shown to lead to a long list of hypertrophy-boosting mechanisms, and one of these includes increased satellite cell activity, which also increases the muscle cell’s ability to continue expanding.

If you’re still craving more science (assuming you’re an NSCA member), you can download THIS article which is dedicated entirely toward the science behind the pump (Brad and I wrote this last year). And if you want to know Arnold’s full take on da pump, watch this short video clip from Pumping Iron where he likens the euphoric feeling of the pump to cumming (don’t get me wrong, I love the pump, but if given the choice between sex or a quick session of easy bar and concentration curls, I’m going to have to go with sex, but I digress):

How This Article Came to Be

Before I delve into the methods, let me tell you how this article came to be… (and by the way, none of the ladies below know that I’m posting this, so I hope they’re not mad at me).

Last year, a figure competitor named Liz Benda who I see each year at The Fitness Summit informed me that when she does hip thrusts, she attains a 2″ glute pump. I thought it was hilarious that she actually measured it. I’m curious to hear if other ladies can achieve an instant 2″ glute pump as well. 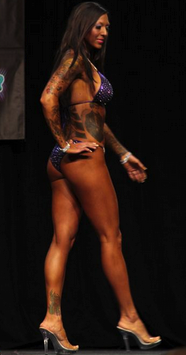 A couple of weeks ago, an Irish bikini competitor I work with named Sarah Dunne was telling me about a simple band exercise she discovered that pumped up her glutes quite well. Essentially, she double wraps a band around her ankles and then grabs a hold of the middle of the front side and does American deadlifts (my savvy readers will be able to deduce that this exercise would require combined hip abduction torque, hip extension torque, and pelvic posterior tilt torque). She postulated that this would make for an excellent glute-pump strategy backstage during bikini competitions.

I gave this exercise a try and found it very useful for glute pumping. For many, it might be better than bodyweight hip thrusting, so make sure to carry a band around with you in times when glute pumps will be necessary. Below are two videos of me experimenting with Sarah’s idea – in the first video I do it her way, and in the second video I did it with the bands around my feet. I prefer bands around the feet. At any rate, I like short strokes for these to keep constant tension on the glutes.

Two weekends ago, I was in Las Vegas at the 2014 NSCA National Conference hanging out with my friends Alan Aragon, Jeana Aragon, Brad Schoenfeld, Nick Tumminello, and Jaclyn Gough. I hadn’t met Jaclyn before, and she confessed that since she knew she was going to meet me, she busted out a few sets of bodyweight hip thrusts prior to heading out. She wanted her glutes to be plump so I would approve of her conditioning.

Last Friday, I was working with Deanna Kane, and I told her about this whole glute pump phenomenon, and she confessed to hip thrusting prior to heading out for the night on several different occasions – especially when she wears a tight-fitting dress. 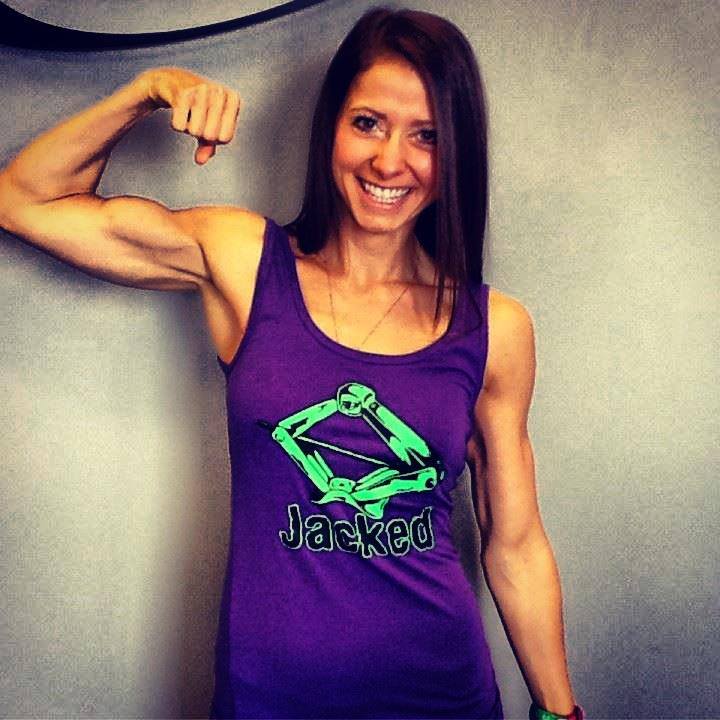 If all four of these ladies pay attention to their glute pumps, then I’m sure they’re not alone. I suspect that there are thousands of ladies out there, pumping up their glutes prior to parties, nights out, and competitions. It’s time their secrets hit the mainstream.

How do achieve a glute pump? Well, you’re going to have to figure that out for yourselves. Different methods are going to work better for different individuals. However, I can give you some options.

In THIS article, I listed Andrew, Joey, Sammie, Diana, and my favorite glute burning/pumping methods. HERE and HERE are two videos that demonstrate some good methods. However, these methods require equipment.

Many times, you’ll be out and about, and you’ll need to attain a rapid glute pump with little or no equipment.

Just arrived to the beach? 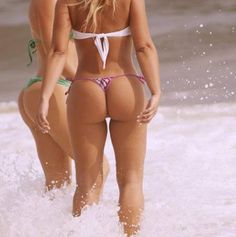 Just pulled up to your photoshoot? 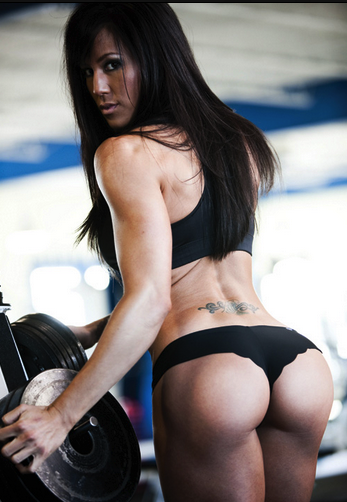 Backstage at a bikini contest? 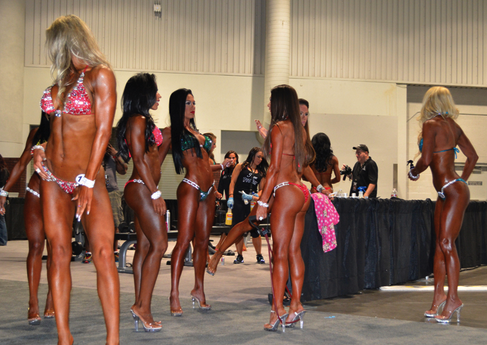 Pulled up to the party?

Therefore, you’ll need to know how to pump the glutes with just bodyweight or bands (or whatever you have in your vehicle or purse).

One thing that’s very important to understand about pump training is that it’s not about a specific number of sets and reps (and rest periods). Just fiddle around and attain a pump. Many methods can work, but the best method for you probably differs from the best method for me.

Below are some ideas:

4. Get your Jane Fonda on – get down on the floor and do a bunch of floor work. Quadruped hip extensions, quadruped fire hydrants, bird dogs, glute bridges, quadruped hip circles. 5-10 minutes should suffice.

7. Isometric lunge hold supersetted with single leg hip thrusts – hold the bottom of a lunge position for 30 seconds, trying to really feel the tension in the glute of the front leg. Then bust out 10 single leg hip thrusts with that same leg, pausing for 10 seconds on the last rep. Repeat with the other leg. Rest a minute and repeat the sequence.

8. Partner-assisted hip thrusts – if you have a partner around, they can stand over you while you do hip thrusts and exert pressure on your hips with their hands (alternatively, they can straddle you). Do 20 reps against resistance, then 20 more reps with just bodyweight. Repeat two times.

I hope that this article has expanded your sexifying repertoire and given you some food for thought. Don’t let me catch you in a photograph, at the beach, or at a party without your glute pump on! #glutepumpfordays 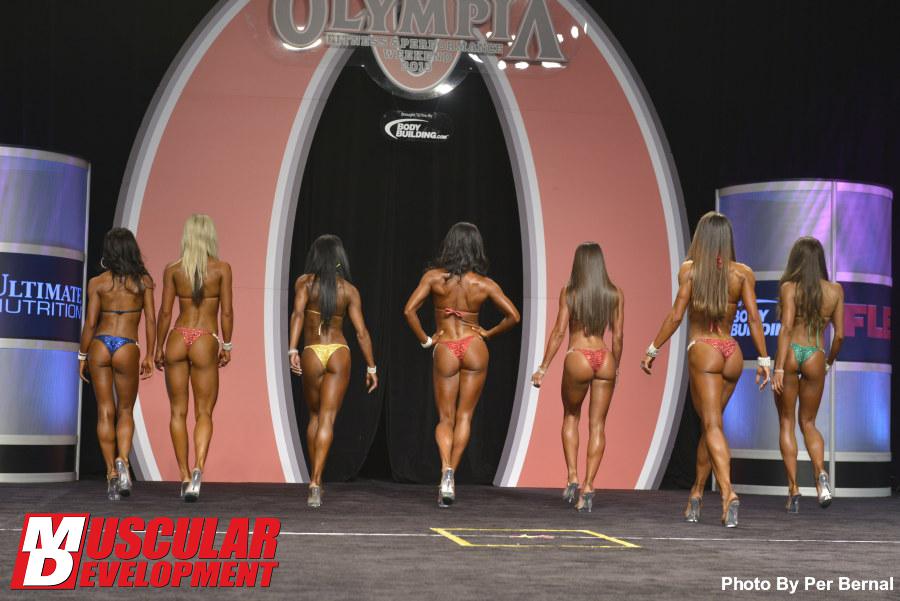