I REALLY love the 100% Raw Federation as they allow for the following competition options:

With such a broad range of options, most lifters can figure out what suits their desires best. I chose the full power and curl only so I could also perform the curl (the curl is optional and doesn’t factor into your total). The rules for the strict curl are on page 11 of THIS document in case anyone wants to read up on that lift.

In case anyone is curious about the jumps in powerlifting, the bar and clips together weigh 55 pounds. The jumps are 2.5 kgs, which equates to 5.5 pounds. See THIS link which shows kilo to pound conversions for powerlifting. The red plates are 25 kgs or 55 pounds. Smaller jumps can be made if attempting a state, national, or world record.

I went with Diana (my girlfriend) and Rob (my long time friend who I convinced to attend and who I trained over the past two months). Here are our results:

Basically, my girlfriend is a badass. After just 6 months of training, she set the Arizona state record for her weight category (weighs 123 pounds, squatted 225.7 pounds).

I’m extremely proud of her as she didn’t initially want to do this due to preconceived notions of powerlifting “bulking you up and making you look manly.” I convinced her to try it and she stuck with the training and did very well.

She does not do well with the sumo-squat and has very strong quads, so we stuck with a more narrow-stance squat. In training she tends to skimp on depth from time to time and not hit parallel. She also has huge issues with knee valgus and we’ve worked to correct that. These only reared their ugly heads during her max attempt, which can be expected.

She could have curled the 60.5 pounds (she’s done it in training) but they screwed up with the scheduling and had her curling and squatting at the same time. Her max curl was around 60 seconds following her max squat, which is insane!

I know she could have hit the 45 kg (99 pound) bench but she felt strong and wanted to go for it. Unfortunately she failed. She’s actually gotten 105 pounds in training, but the day of the meet what you do in training doesn’t count! Her form really came around – it’s still not the best, but it’s come a long way in just 6 months.

With the deadlift, she went too wide on her second attempt and couldn’t budge the weight. We took in her stance slightly and she smoked it. I was hoping for 120 kgs (264.5 pounds), as she’s gotten 255 pounds in training. But overall she did very well and I’m very excited that she has a state record under her belt.

On a side note, several people in the stands commented on her amazing glute development (I have her doing plenty of hip thrusts too), and her singlet was very popular amongst the ladies.

Rob is a long-time friend of mine (known him for 16 years now), and he’s naturally a very strong guy. He’s been featured in a couple of my Youtube videos over the past several years and we’ve trained together off and on over the years. I was very eager to get him to compete with me as I had a hunch that he’d like it.

I thought that Rob would beat me in the curl competition as his biceps are much bigger and he was beating me in training. However, for some reason my curls were crazy-strong yesterday.

Rob is a very upright, quad-dominant squatter. I’ve actually referred to him in the past – as a young trainer I forced him to use a wide stance and flare his toes despite the fact that he always complained that it hurt his hip. Then I stumbled upon Shirley Sahrmann’s work where she talked about hip anatomy. Rob does best with a narrow stance and his feet pointed straight ahead. Rob has trouble hitting depth in his squats, but we hammered this in training. I’m very pleased that he nailed depth on all three lifts. I feel that he’s capable of 20-30 more pounds but we were worried that he’d skimp on the ROM and miss depth.

Rob’s hit a 335 pound bench in training, but this wan’t in the cards yesterday. Neither Rob or I were accustomed to pausing for a second with our bench presses, which required us to move down in weight considerably compared to the touch-and-go style.

Rob has some of the worst hamstring flexibility and this limits his deadlift. During the active straight leg test, he could only reach around 35 degrees, which was horrendous. I had him stretch his hamstrings every single day for 10 weeks, and his hamstring flexiblity (straight leg hip flexion) improved by around 30 degrees. He believes that this was the most critical component to his increased deadlift strength. I also worked with his sumo deadlift form tremendously as he tends to want to line up with the bar away from his shins, allow his shins to jut out, let his knees cave, and squat the weight up. By lining up with the bar on his shins, keeping the knees out, and keeping the hips higher, he set an all-time PR in the deadlift and slaughtered his deadlift from 3 months ago by 140 pounds (he was using 385lbs and ended up hitting 525).

The stars in my mind were definitely Diana and Rob. I was happy with their performance but a bit disappointed with my own, mostly because I didn’t want to let my readers down as I predicted heavier weights.

My first lift was 132.2 pounds and it felt like cupcakes. Second lift was 137.7 and it too felt extremely light. Third lift was 143.2 pounds and it was very easy too! I checked out the state record and it was 70kgs (154.2lbs). I decided to try for 71kgs (you can go up by 1kg increments for state records, and you can go for a fourth attempt if you’re trying to beat a state, national, or world record). I almost got it!!! I was so damn close, but my butt came off the pad by around 1/2 an inch. I actually almost fainted on that last attempt which would have been pretty funny. I can see the headlines: “Big dude faints during curl competition and is rushed to the hospital.” I’d have never lived that one down. So I almost got the state record which would have made me very proud. Oh well, there’s always next time!

Next up was the squat. My first attempt felt incredibly easy. I like to perform full squats in training, and I don’t ever want to be called on depth, so I went deep. My second squat didn’t feel that tough – I knew I had room to go heavier – just not 25 pound heavier. On my third attempt I just ran out of gas. Usually I can grind a lift like this out and “good morning” the weight up, but this was just too heavy for me. In the future I’m going to tinker around with sumo-stance squats to just below parallel and see if I can get stronger with this manner of squatting.

My bench press opener was way too light – felt like cupcakes. Second lift was very easy too. But just like the squat – I took too big of a jump and missed my third attempt. My form has improved dramatically in the bench press over the past six months – I’ve benched like a bodybuilder my whole life and benching like a powerlifter took some getting used to. But I’m finally getting the hang of it and it’s feeling more natural to me. I wish I had a better arch – I’m going to keep trying to improve my t-spine extension over time.

Finally – the deadlift. My opener was cupcakes. My second attempt wasn’t too challenging and I felt like I had more in me. But I didn’t have 600 pounds in me – I took too big of a jump. Barely budged it off the floor. I want my 600 pound deadlift though!!! I’m going to keep plugging away at this. My posterior chain strength (hip thrust, back extension, reverse hyper, and glute-ham raise) was at an all-time high, as was my grip strength. However, my form changed from last year. Last year I rounded a bit more which made it easier off the floor (but made the lockout harder). I wonder if training with more upper-back rounding would improve my strength. I also want to experiment with sumo deads as I may be able to get stronger with this style.

There are many things I learned, including:

Hope I didn’t disappoint any of my readers by failing to reach my goals – I’ll get this over time, but I need to gain more strength and be patient! 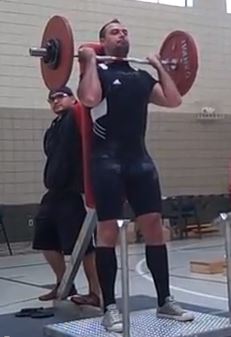