Scott Taylor is a strength and conditioning coach at High Performance Sport New Zealand. He was sharing an interesting story with me a while back and I wanted my readers to hear it. It appears that the hip loading induced by Westside-Style box squats transfers quite favorably to acceleration improvements. Notice the attention to detail by great strength coaches. The coaches out here are testing all sorts of things and analyzing the numbers. I love it! From time to time I’d like to interview various coaches and share with you anecdotes, case studies, and experiments. Here’s the interview:

1. Hi Scott, thanks for agreeing to do this interview. What is your role at High Performance Sport New Zealand and how many teams are you in charge of?

On top of that I train some junior elite water polo athletes (20 under 18 athletes), am doing my master’s degree, play Water Polo for the NZ Men’s team and North Harbour Men’s team, and coach the NZ school boys’ water polo team and also the NZ under 17 team in their build up to u18 worlds next year. 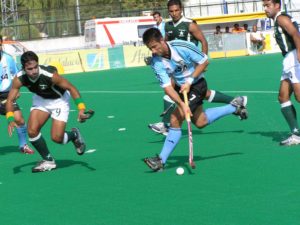 2. You were telling me a very interesting story about dynamic box squats and their carryover to acceleration. Please share that story with my readers.

Earlier in the year we started doing wide stance box squats with band resistance or assistance with our NZ men’s hockey team. Before this phase the guys weren’t the strongest lower body athletes but certainly weren’t wimps. Each athlete had a training age of at least a year with me and Matt Kritz (head strength and conditioning coach of High Performance Sport New Zealand) as their S&C trainers. We have consistent testing records of speed and acceleration measures as well as power profiles dating back between 12 and 36 months with each athlete.

We wanted to wide stance squat them to try increase posterior chain activation and really develop that area. With hockey typically being a very quad dominant sport where the athletes are bent over (with a poor bending pattern) and their weight is on the toes of their feet with heels elevated for long periods of the game, we felt we needed to really develop the posterior chain, not just from a performance view but also an injury reduction mechanism.

We began wide stance box squatting them, once a week – 10 sets of 2 with blue band resistance (2inch wide bands). We did a three week protocol loading up the weight over 3 weeks and then changing the bands to assist the movement (band assisted squats) for three weeks, building up the loads across the weeks. 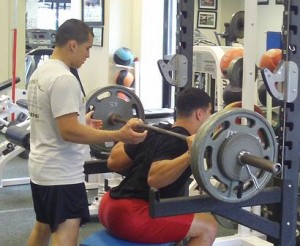 The squatting style we used was similar to the west side barbell wide stance box squat, where the hips are forced back so far that at parallel, the shin is still perpendicular to the ground, with the shoulders in line with the ankles and hips well back. The box was at about parallel but varied for each athlete.

After 3 weeks resisted and 3 assisted we did a whole testing battery. Squat 1RM within the squad increased hugely (traditional stance back squat, greater trochanter below line of the head of tibia) with a team average increasing from 120kg(max of 145kg, min of 100kg) to 155kg(max 190, min 140kg). With an average BW of 77kg (max 95kg although skin fold sum of 8 of 44mm and 6 foot 3, and min 71kg) these guys are relatively strong dudes given the aerobic and metabolic beasts that they have to be and compared with their body weight. All athletes squatted at least 1.8 x BW.

Acceleration 0 – 5m time was hugely decreased with a team average decreasing from 1.02 seconds to 0.94 seconds. Some athletes decreasing their time by up to 0.18 seconds from their pre test scores that were also a PB time prior to the commencement of this training phase. One athlete went from 1.01 sec PB to 0.86 whilst another from 1.07sec PB to 0.89sec.

Speed 40m time decreased within the team from an average of 5.25sec to 5.10sec average with some 3 players running between 4.80 and 4.90sec for 40m from static start. It should be noted that there was no specific speed or acceleration training sessions in this 6 week block and their physical conditioning was high intensity hockey specific small sided games.

3. What loads did you use, what box heights, and how long were the inter-set rest periods?

*Instructions were given to do concentric phases at maximal velocities without losing technique.

Rest period between sets were not strict – the athletes would work in groups of 2-5 and would wait for their other group members to all squat before starting their next set. They would not have rested for more than 150 sec at any stage with most rest periods being between 60 and 90 sec.

Ideal box height was glutes touching a box below the height of the head of tibia, however if the athlete lost form at depth and their pelvis started to ‘scoop’ for want of a better word, under them the height was raised using half inch soft flooring tiles that could easily be stacked up to change the depth of the box very easily. Each athlete had a certain depth that we assessed they could get to safely.

4. Did you ever consider using bands or chains? (I sent Scott the questions all at once so I didn’t see his previous answer before asking this)

We used 1m long blue bands 2 inch width for the duration of the training intervention.

The bands were set up in a triangle formation with two connection points for the bands at the base of the squat rack and the third being over the barbell. Athletes would stand in the middle of the two base points to squat.

When assisting the movement, a band triangle was used again with two connection points at the top of the squat rack on each side.

Because we were already using bands, no thought was given to using chains. 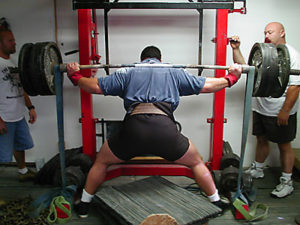 5. What supplementary lower body exercises did these athletes perform during the same time period?

The squat day was always Monday or day 1 of a 3 day gym week with these guys. After a good warm up and movement prep they would do their ten sets of squats then move on to supplementary exercises.

The supplementary exercises were done in a circuit, 5 rounds of the following

– stiff leg sled drag , 40-50kg, 30meters. Pulling through the heels to drive hips under you. No push off with back leg.

– reverse hyper – single leg for some athletes, double for others (10 reps or 10 each side)

-stiff leg sled drag as above. 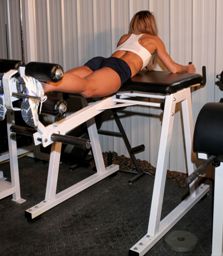 Thanks Scott, I appreciate your time! Keep up the great work my friend.