Hi Bret, I’m a big fan or your blog and I appreciate your science-based approach. Recently, a popular Norwegian powerlifting coach stated the following:

“Missing a lockout is never about weak hip-extensors. If the person is strong enough to initiate a hip extension in the first place he should have no problem finishing it. If you stop close to full extension it is not about weak extension but weak grip or thoracic flexion”

I would love to know your take on this statement Bret. Thank you! – Andreas

Hi Andreas! Thanks for the compliment. Before I answer your question, I’d like to stress that I’m a huge fan of Norway’s strength & conditioning practices and their commitment to sports science. In fact, I’m probably more impressed with Norway’s efforts to understand the practical aspects of sports science than I am with any other country right now. I have no doubt that this coach in question works with some incredible athletes, and my response should not be misinterpreted as a sign of disrespect but as a way of pushing strength science forward. 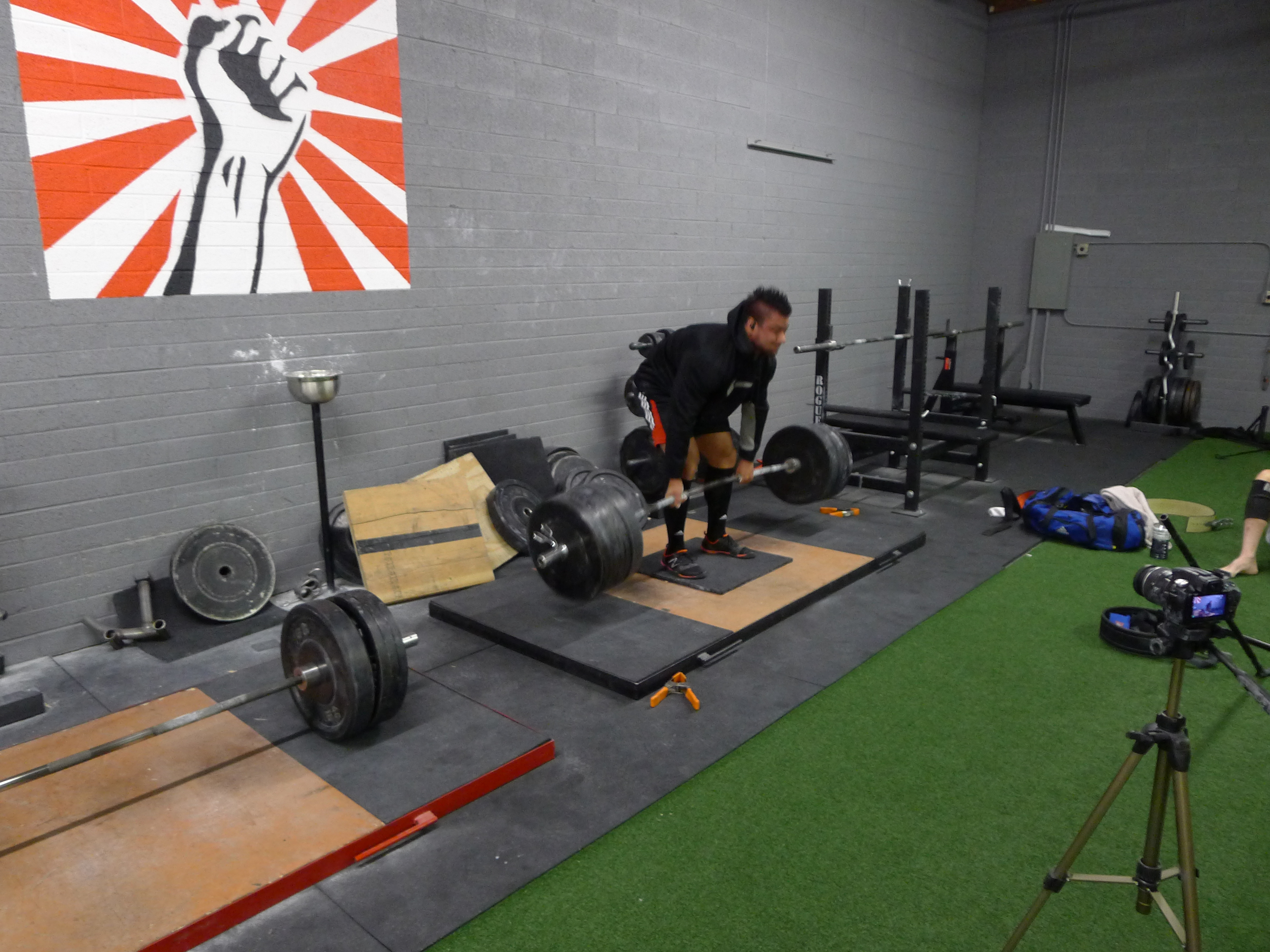 That being said, this is an awesome topic and one that I’ve spent tons of time considering. Moreover, at Revolution Training System, I lift with some seriously strong deadlifters. Two are right at the 800 lb level, two at the mid-700 lb level, several guys pulling in the mid 600’s while weighing under 200 lbs, and a handful who can pull triple bodyweight. I think it’s important for fitness writers offering maximal strength advice to actually work alongside strong powerilfters as there’s tremendous knowledge to be gained.

Below are my thoughts. And by the way, many of the images used in this blogpost are from Chris Beardsley and my extensive Hip Extension Torque product which can be purchased HERE (read more about it HERE).

Many lifters indeed miss their deadlift lockouts due to weak grip strength. Here are some thoughts regarding grip strength:

Some lifters indeed miss the lockout due to excessive thoracic flexion. Lifters who are accustomed to pulling with a strict arch will find that it’s much harder to lockout the deadlift with some spinal rounding. When these lifters perform all of their training in a strict fashion and then attempt a maximal pull with a slightly rounded posture, you see them quaking and quivering at the lockout, and most often they miss because they lack the glute strength to push the hips forward.

When they pull in a strict fashion, however, the lockout is smooth and easy. The problem is, when going for a maximal attempt (usually seen on a 3rd attempt on the platform), most lifters can’t initiate bar movement off the ground with perfect posture; their legs aren’t strong enough. So they round a bit to get the bar moving, which causes problems for them when they need to lock the weight out.

There’s more to the story then meets the eye, so let’s delve deeper. First, let’s examine the hip extension torque angle curve using isokinetic dynamometry. In other words, how strong are the hip extensors (glutes, hamstrings, and adductors) when moving from deep hip flexion to full hip extension?

Surprisingly, the hips are markedly stronger in hip flexion. This is likely due to increased contribution of passive forces (stretch) as well as increased adductor contribution to hip extension (adductor moment arms for hip extension are greater in hip flexion). In the graph below, you’ll notice that the hips are almost twice as strong at 90 degrees of hip flexion compared to at 180 degrees of hip flexion (neutral hips). This has been shown to be the case in a number of published studies (six to my knowledge). See HERE for one of the abstracts. 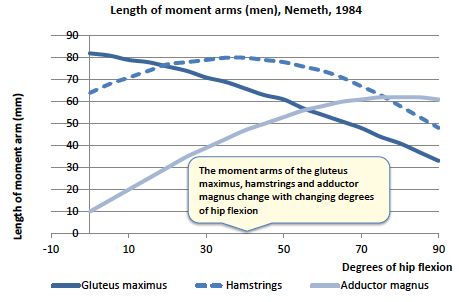 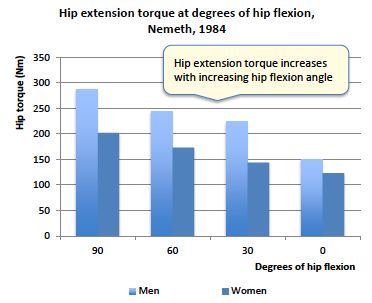 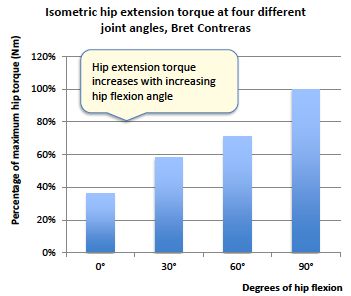 Now let’s examine the hip extension torque requirements in a deadlift. Does the deadlift match the hip’s natural strength curve? As you’ll see in the graph below, it does. This is due to the increasing mechanical advantage in the deadlift as the movement rises, which is due to decreasing resistance moment arms at the top range of motion. See HERE and HERE for abstracts of studies on this topic. 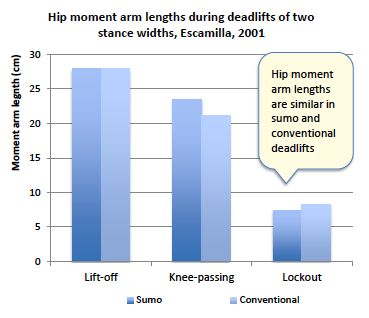 The resistance moment arms (not to be confused with muscle moment arms) decrease as the deadlift rises since the hips move closer to the load in terms of horizontal distance from the joint center to the bar. 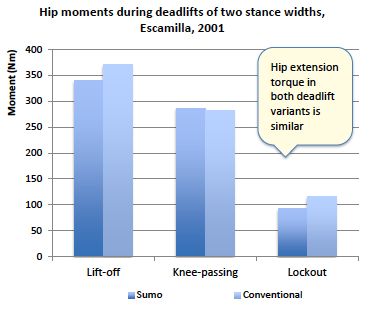 Since the resistance moment arms diminish as the bar rises in a deadlift, it’s no surprise that the hip extension torque requirements diminish as well.

5. The effect of range of motion on isometric deadlift strength

Is this mechanical advantage reflected in isometric deadlift strength? In other words, does the vertical ground reaction force we can create near lockout reflect the mechanical advantage (smaller resistance moment arms for the hips and the knees)? Yes, it does. You can see in the graph below that lifters are stronger at the top of the deadlift compared to when pulling off the floor.The table below is from THIS paper, and HERE is a link to a similar experiment conducted at The Glute Lab.

Isometric pulling strength is stronger at lockout compared to from the knees or from the floor. This indicates that no lifter should fail at lockout (but they often do). Also, many lifters are stronger in the mid-thigh pull position (which utilizes the quads to a greater degree) compared to the actual deadlift lockout position.

So what does this all mean? Lifters should be stronger at the top of a deadlift compared to at the bottom. Why do they fail? Here are the various reasons:

I’ve already discussed grip strength and posture above, so below I’ll address the other reasons.

If a lifter allows the bar to drift away from the body, it can easily cause a missed lift. The closer the bar is to the body, the lighter the load on the low back. When the bar drifts out in front, the lifter has to reign it back in, and this throws off the lift and prevents the lifter from locking out the load. Ironically, this often happens when the lifter lines up with the bar too close to the shins prior to liftoff. There’s a sweet spot in terms of shin-to-bar distance that is inherent to each lifter that allows for the best mechanics and greatest loading.

8. Lack of synchronicity and poor coordination

Sometimes the bar path is fine but the lifter’s kinematics are off. You want to see the body move up and then back (the trunk angle stays fairly similar from lift-off to the knees, and then the trunk straightens out from knees to lockout). You also want consistency from one rep to the next and from one set to the next. Lifters get more consistent over time through practice – beginners show huge variability.

Sometimes lifters will allow the shins to jut forward after the bar passes the knees by extending the hips without simultaneously extending the knees, which can cause a missed lockout. This is probably due to the fact that many lifters are stronger in a mid-thigh pull (MTP) compared to a deadlift lockout (see HERE for data on that, and see HERE for what a MTP looks like – but this vid is dynamic, not isometric). This is reversible through training.

Many people fail to consider the role of fatigue in a maximal deadlift. Some lifters are extremely neurally efficient  and can summon very high amounts of neural drive to all the body’s muscles at once. After a couple seconds of pulling with maximal loading, the body is drained and has trouble sustaining maximal contraction. When lifters are accustomed to pulling submaximal loads in training, they can find themselves unable to lockout maximal loads simply because they fatigue by the end of the lift and miss the lockout.

Think about it – the lifter possesses the top end strength to finish the lift (if the lifter was to perform a partial deadlift with the same load from the same joint angles, it would be a piece of cake), but he or she is too darn drained to complete it. Some lifters take up to 6 weeks to feel fully recovered from a maximal deadlift and be able to duplicate their strength demonstration, which indicates just how much demand is required of the central nervous system (CNS) during this task.

At any rate, why can Konstantin lock out his deadlifts even though he rounds? Because his end-range glute strength is phenomenal. He can easily push the hips through.

Most lifters cannot do this as they don’t have gigantic glutes like Konstantin. Many lifters do better pulling with an arch so they can lock it out easier. However, if Konstantin pulled with a strict arch, he wouldn’t be able to get as much off the floor as he can when rounded, so his poundages would be lower. It all depends on the lifter.

As you can see, assistance lifts should be tailored to the individual. For the lifter who always pulls with an arch and does best with an arch – just keep squatting, front squatting, deadlifting, and block pulling with strict form. Leg presses and heavy kettlebell swings can help too.

But what about the lifter who round-backs the weight up? This lifter has two options. First – work on building strengths – do tons of American deadlifts, hip thrusts and rounded back hip extensions. This will build end-range hip extension and glute strength so that the lifter can continue to lockout maximal pulls. 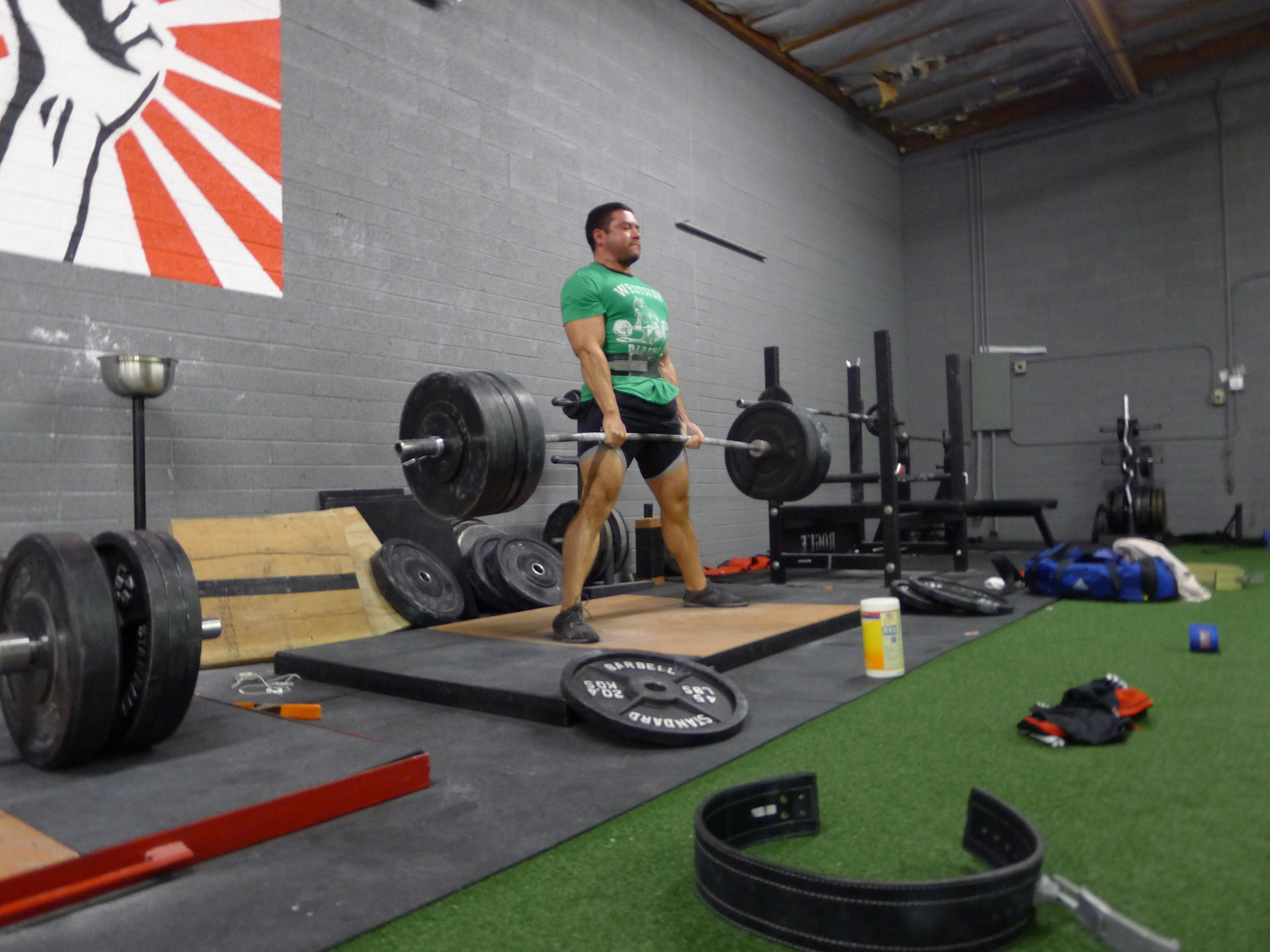 And second, the roundbacker can work on building weaknesses – more squats, front squats, strict deadlifts and block pulls, heavy kettlebell swings with strict form, leg presses, and trap bar deadlifts. These will increase leg strength and arched back hip extension strength that will allow the lifter to pull more weight off the floor, making the lockout easier to achieve. This strategy does not work for everyone though, as anatomy influences the hip extension torque angle curve, and muscular hypertrophy potential in the quads, hams, glutes, and adductors is highly genetic.

At the end of the day, not everyone will look, feel, or perform the same in the deadlift.

I hope you can see here that ideal deadlifting form, along with reasons for failure and optimal assistance lifts, are highly dependent on the lifter. Anatomy determines body segment lengths, muscle moment arms (leverage), muscle size, and spinal shape, which together highly determine deadlift form and tolerance to spinal injury.

Many coaches like to believe that there’s a one-size fits all approach to deadlifting form (and squatting, and benching, and every other lift). I hate to say this, but there’s not. A good coach works with his lifters to develop the ideal form that maximizes their strength potential and their ability to make consistent gains over the long-haul.

What’s New for the Hip Thruster?

What’s New for the Hip Thruster?