On “Creating Torque” by Screwing the Feet Into the Ground

Lately, there have been many experts suggesting that for optimal squatting and conventional deadlifting performance, one should purposefully create torque by screwing one’s feet into the ground. Kelly Starrett and Mark Bell are two proponents of this.

I’d like to discuss my thoughts on this topic, but before I do I want to mention that I have tremendous respect for Kelly and Mark, so this is nothing personal. 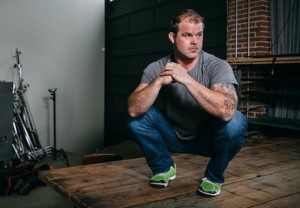 And also before I get started, let me briefly touch upon torque for those who need a brush-up on their biomechanics.

If I push against a wall, I exert force against that wall. I also exert force into the ground. Force is a vector quantity because it must contain a direction. I can also push against a wrench. However, since there’s a pivot, the force creates torque about that pivot. Torque is turning force, and can be thought of as linear force’s rotational analog. While force is usually measured in Newtons, torque is usually measured in Newton-meters, which you can think of as the amount of force exerted perpendicularly to the wrench one meter away from the pivot (which one be one long-ass wrench but hopefully you get the point). Torque is sometimes reported in pound-inches to make it more “American-friendly,” but the point is that it’s dependent on both the magnitude and distance away from the pivot of force production. 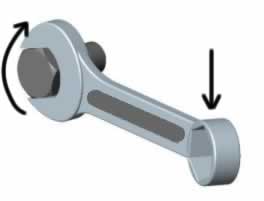 How Can I Increase Torque Production?

In biomechanics, muscles exert forces which create joint torques. In other words, when muscles contract, they pull on bones rather linearly which creates rotational forces, or torques, around the various joints of the body.

Larger muscles are capable of producing greater muscle force and therefore creating more torque, and tendon insertion points farther away from the joint centers have greater leverage and can therefore produce greater torque.

Biomechanical Explanations of Torque Require a Joint and an Action 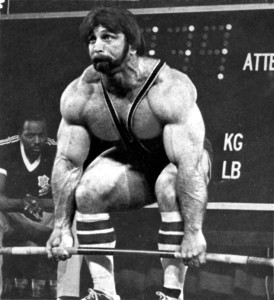 What Kinds of Torque are Present in the Deadlift?

Sure lots of muscles will be co-contracting for joint stabilization purposes, but the net torques will come out as listed above.

Do I Have to Screw my Feet into the Ground to Create Torque?

No, you don’t. As I mentioned directly above, pulling a conventional deadlift will elicit all sorts of torque production at the various joints.

But again, in order to be biomechanically accurate, you must specify the torque. There are hip and lower limb muscles than can create external rotation torque along the axis of the leg, so screwing the feet into the ground at the initiation of a deadlift could involve hip external rotation, knee external rotation, and foot abduction, all in flexed positions. 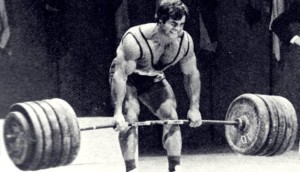 Do I Need to Create Hip External Rotation Torque When I Deadlift?

I believe that beginners should indeed practice “screwing the feet into the ground” with submaximal loading to feel the glutes activate properly. I feel that performing some lateral band walks with band placement around the feet prior to conventional deadlifting could be valuable in this regard as well for glute activation purposes.

That said, I’ve heard several anecdotes from fellow lifters who employed this technique during the conventional deadlift and felt that it helped them. For the rare individuals who experience knee valgus when deadlifting, they should definitely practice screwing the feet into the ground during deadlifts. But you don’t see this too often as the deadlift doesn’t require much rotary hip stability, at least in comparison with the squat. So definitely give it a try, but feel free to dismiss it if you don’t find that it’s helpful. Here is a video where I better explain some of this information:

What About Squats – Should I Position my Feet in Neutral, and Should I Create Torque by Screwing my Feet into the Ground During the Squat?

With regards to Kelly Starrett’s advice on squatting, I disagree in some respects and agree in other respects. Here’s where I disagree. Kellie believes that lifters should point their feet straight ahead during the squat. I believe that around a 15-30 degree foot flare is best for most people, however some indeed do best with neutral foot positions. I don’t feel that blanket statements can be made with ideal foot position for squatting as it’s highly dependent on the anatomy of the hip and other lower body structures.

For example, if I try to squat with my feet straight ahead, it hurts my knees. If I flare slightly, there’s never any pain. This makes sense as my entire family is a bit duck-footed. Some of my powerlifting friends experience hip and/or knee pain when attempting to squat with their feet straight ahead, even if they’re forcing the knees out. Conversely, some of them experience pain when attempting to flare their feet outward in a squat and instead require a straight-ahead foot position. Therefore, I recommend that lifters tinker with foot flare in order to find the optimal position for their bodies.

Here’s where I agree with Kelly. I feel that the majority of lifters feel and perform better in the squat when they take a narrow to moderate stance width and aggressively force the knees out. I address this in the following video:

Furthermore, I agree that individuals should actively screw their feet into the ground during squats. However, I don’t think the emphasis should be on the ground-reaction force, but rather on forcing the knee outward, which should automatically produce the desired effect into the ground. Ideally, just as in the case with other squat cues, the lifter would reach “automaticity” in that he or she wouldn’t need to think about it when squatting heavy  – it would just happen naturally. In this way, it will most certainly enhance and not detract form squat performance.

Fitness is Not Religion or Politics, and there are Many Ways to Construct a Good Training Program

Fitness is Not Religion or Politics, and there are Many Ways to Construct a Good Training Program