Banned In The USA: A Renegade Approach To Learning The Olympic Lifts

Today’s post is by a friend of mine named Nick Horton. Nick is an Olympic weightlifting coach out of Portland, Oregon. I’ve found Nick to be very intelligent, humble, and open-minded; a rare combination of qualities. I really like this blogpost because it shows an effective alternative to conventional pulling technique that you don’t hear about too often. Enjoy!

Banned In The USA: A Renegade Approach To Learning The Olympic Lifts
by Nick Horton

What I’m about to tell you could get me shot, but I’m going to say it anyway. There is more than one way to do the Olympic lifts.  Yes … that’s right.  I’m crazy enough to have said that in public!

In this article I’m going to go over the basics of a technique called, “The Low Hip Start.”  Here in the United States it is considered totally unorthodox and it is flat-out banned by the majority of the Olympic lifting coaches in the country.  Yet, it is quite common in some of the best weightlifting countries in the world – including China.

The Low Hip Start is a method that makes getting the bar from the ground to the hip – the hardest part of a Snatch or Clean – FAR easier for the Average Jane weightlifter.  And I think you have a right to know about it.   But be warned, my friend. If you use it here in America, you are a renegade weightlifter!

Welcome to the revolution.

Contrary to the propaganda that gets floated around, there is no such thing as the canonical method, or the “ideal” form of the snatch or the clean and jerk that everyone should be doing.  While the underlying physics of what is happening to the barbell in a successful lift is the same across all lifters (the laws of physics ain’t changing), the “technique” – those movements of the body we see with our naked eyes – can vary widely from one lifter to the next based upon natural variations in how different humans are shaped.

To explain, let’s go over two things that we know for sure about what the bar has to do.

We know these things about what the BAR has to do.  Those are the basic physics of the situation.  The question we are faced with is, “How do we best get the bar to do those things with our wimpy human bodies?”  Or, “What is the best technique to use to make this happen?”

The Cardinal Rule of Weightlifting: when the bar hits the hips, you MUST be on your heels!!!

Not every coach is going to agree with me on this. However, in my opinion, if you get everything else wrong, but you are able to stay on your heels when the bar hits your hip, then we can turn you into a weightlifter.

In the old High Hip Start position (as demonstrated by the great David Rigert, above) there is a hierarchy:  Your knees are below your hips; your hips are below your shoulders; and your shoulders are forward over the bar.  The bar is also starting close to the shins, over the “laces” of the shoe, or arch of the foot.  Your weight will be on the mid-foot, or even the ball of the foot in this position.  As soon as you pull the weight off the floor, the goal is to quickly shift your balance back onto the heels for the remainder of the pull.  Essentially, the start position looks a bit like that of a deadlift.

So … What’s the big deal?  Why not just do it the old way?  Let me repeat myself:

“As soon as you pull the weight off the floor, the goal is to quickly shift your balance back onto the heels for the remainder of the pull.”

How likely do you think it is that with a heavy weight, if you start on the balls of the feet, that you will be able to shift back onto the heels?  I can tell you:  Not Likely!

You must be on your heels when the bar is at the hip position.  I cannot stress this enough.  When I’m in the gym I sound like a broken record.  “Heels, heels, stay on your heels!”  Of all of the things that come out of my mouth, that’s the one that I say the most often.  And with good reason.  It does you no good to get your hips through, finish your pull, and be moving fast if the bar ends up two feet in front of you.   Putting the bar in the right spot is priority number one.

The Low Hip Start is one way coaches have found to increase the number of real-world lifters (like you!) who are able to stay on their heels throughout the entirety of their snatches and cleans – and thus lift more weight overhead.

Phase One:  Heels Down, Hips Down 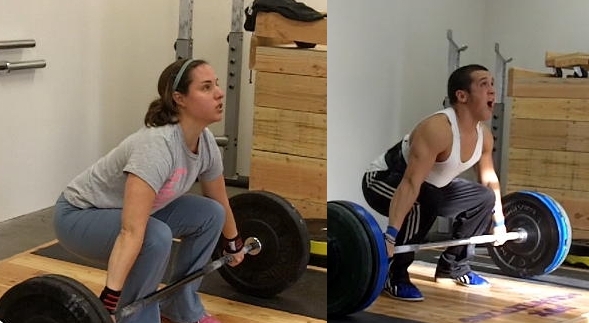 In the Low Hip Start:

When learning how to do this, it helps to lean backwards a lot.  Exaggerate the lean-back, be back on the heels, but still keep the knees forward.  (It’s hard to do this with an empty bar, but once you get to about 75 or 100 pounds, you can usually lean back very far without falling over backwards.)  I’ve found that the exaggerated lean-back teaches someone the Low Hip Start faster than if they don’t use it.  Over time, the lifter can dial down how far they are leaning backwards at the start.  But in the beginning, really go for it.  I want you to err on the side of being on the heels.

Finally, throughout the entire pull your lats should be as tight as you can get them.  Lock them up before you lift the bar off of the ground and keep them that way.  Your lats help to keep the bar in closer to your body.

Below, I’m giving you two checklists.  The first is the one that I’d be thinking about while watching a lifter.  The second is the one I want the lifter to have in their mind before they lift the bar off the ground.

Phase Two:  Heels Down, Knees Back 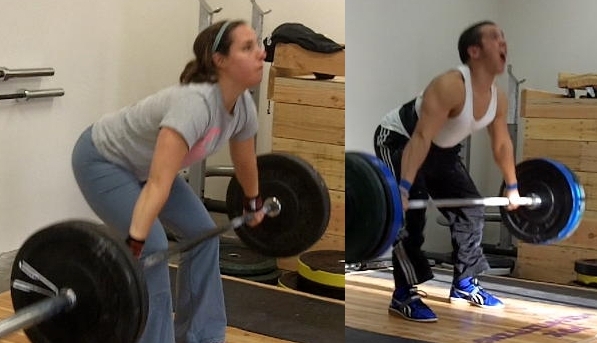 It is the transition from Phase One to Phase Two that presents the biggest problem for practitioners using the old High Hip Start.  They need to somehow transition from being on the balls of their feet to their heels before the bar reaches their knees.  The problem is that the bar is heavy!  It, along with its evil accomplice Gravity, is conspiring to drag you forward.  If you are already forward to begin with at the start, then you have even more work to do to get back on the heels.  With a Low Hip Start that just isn’t an issue.

In the picture above both Beth and Brandon look like they are in a Romanian Deadlift (RDL) position.  That’s pretty accurate.  The reason you want to get into an RDL position is so that you can get your knees back out of the way of the bar – shins perpendicular to the ground.  Remember that our goal is to “skinny” the S-curve of the barbells upward trajectory as much as we possibly can.  If your knees are in the way of the bar as it is moving up, then the bar will have to zigzag around the knees.   Bad news.

Unfortunately, the combination of leaning way back and actively trying to stay on the heels can cause some lifters to avoid getting their knees out of the way, or their hips high enough.  When they do this, they never reach the crane-like position that you see above, and as such, they are losing power.

The contrary concern is that some athletes will successfully rise up the hips, get the knees back, and push their shoulders forward over the bar, but in doing so, they get off of their heels and roll forward onto the ball of the foot.

Of the two problems, I prefer that you err on the side of the first: Stay on your heels, even if you aren’t doing a good enough job getting the knees back. If you get off of your heels at this point, you will never get back again.  It is death!  The bar will fly forward so far that you will miss anything heavy no matter how powerfully you pulled it. 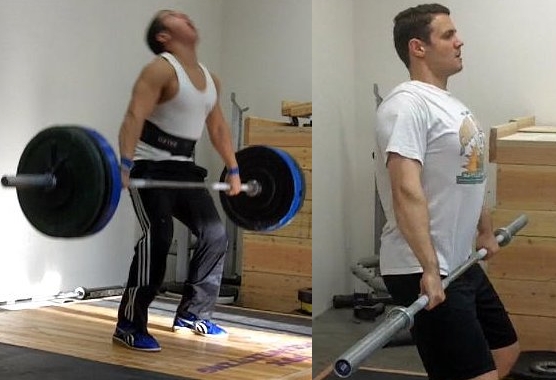 Now that you’ve done all this work to make sure that you stay on your heels, don’t let up!  A LOT of athletes will get to the knees, be on their heels fine, and then right at the last minute while transitioning into Phase Three, they will go up onto the toes.  So sad …

The Hip Position is the most important position of the entire movement.  The reason you did all of the rest of the work you’ve done up to this point is precisely so that you can be in the perfect spot once the bar reaches your hips.  Don’t get lazy and waste it.

The last issue is a big one.  You know you need to get that bar to touch the hips.  Some coaches say, “Hit the Hip”, others say “Brush the Hip”.   But, the point is the same.  The bar MUST touch your hips before it goes up.  If it doesn’t you are losing a substantial amount of power, not to mention the bar’s trajectory is going to be all wrong.

Many lifters misinterpret this edict and actively drive their hips forward to meet the bar, thereby hitting the bar with the hip.  This causes the bar to fly forward, they miss it, and then they look at me quixotically and say, “What happened? I did just what you said!  I hit the bar with my hips.”

To which I respond, “No … I said Hit the Hips with the Bar!”

Bring the bar to you, do not go toward the bar. Keep the lats flexed. Stay on the heels.  Drive backwards.    Get the bar moving back.   Do not move forward to reach the bar.  You are in control, the bar isn’t.

Staying on your heels throughout the pull is the most important thing you can do in the beginning while you are learning.  There is a lot more to weightlifting than that.  Heck, I could write another entire article about how to transition from the pull to the catch.  But, that would be worthless if you aren’t able to stay on your heels throughout the pull, because you’d never be able to catch anything heavy anyway!

By the time the bar is in the hip position, you have to be on your heels in order to provide the necessary force, and the necessary trajectory to the bar.  Using the old High Hip Start technique makes it too hard for most people to honestly pull that off.  They start on their toes and most never get off of them again.  This is especially true of people who don’t have constant coaching by a competent instructor.