An Interview With Martin Rooney

Today’s post is an interview from Martin Rooney. Words can’t describe how much I respect this guy. Just read this interview and you’ll know how awesome of a human-being he is. Martin has earned the respect of the entire fitness industry.

1. Hi Martin, thanks for agreeing to conduct this interview. As far as the fitness industry is concerned, you’ve been around for quite some time. What’s your story…how did you stumble upon this whole “fitness thing”?

My pleasure Bret and thank you for taking the time for an interview.

Yes, I guess you could say fitness has been a part of my life since birth.  Being the son of a physical education teacher and a former Olympic caliber rower, I really had no choice but to live a healthy lifestyle.  My mom was also an original rep for Vitamin Shoppe when it was only a mail order company and, needless to say, I have probably had more Vitamin C than anyone besides Linus Pauling.

My parents were both positive influences on me and prove that the role models and people of influence have a lot to do with who and what you become.  I was raised to be concerned about what I ate, my physical fitness level and my achievements in school.  Without this foundation I wouldn’t be where I am today.   Now being a parent, I have tried to bring that same attitude to my kids.

Bret’s Note: You’ll know from this video that Martin does a good job with his kids! Great Cesar’s Ghost! – Classic!

2.   Man, sounds like you had a solid support system. So when you got into sports, what direction did you take, and did you have any influences there?

As a kid, I played just about every sport.  I particularly loved baseball and had a dream I would someday play for the Yankees.  In seventh grade, however, I didn’t make the junior high team and the track coach said I should go out for track.  I had no idea what track was, but after hearing you could run and throw spears, I gave it a shot.  This coach saw potential in me and he became a mentor and perhaps the best coach I ever had.  I went on to win the Eastern States Championship in the javelin in my senior year and went to Furman University to compete in college.   A highlight this past year was when this same coach inducted me 20 years later into my high school Hall of Fame.

3.  Cool.  If you have a track and field background, how and when did you get involved with MMA?  It seems that this is an area many people associate you with now.

After college I went to the Medical University of South Carolina and got a degree in physical therapy and my Masters in Health Sciences.  One weekend I had a break, went home to NJ and tried out for the US Bobsled team.  I ended up passing the tryout and for the next few years, represented the US in competition and lived at the Olympic Training Center in Lake Placid.

My driver was eventual Olympic silver medalist, Todd Hays.  He was also a professional fighter and he starred in one of the original MMA documentaries called “Choke.”  This was 1995 and got me very interested in MMA.  When the bobsled dream was over, I returned to NJ and started training with Renzo Gracie in NYC.  This led to me becoming the physical trainer for his team and many adventures cornering top fighters around the world. 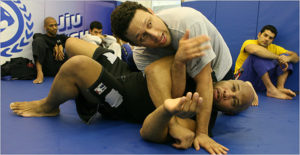 4.  That is an interesting story that many people may not know.  Now aside from MMA, you are also known as a speed guru having trained some of the fastest men in the history of the NFL Combine.  How did that happen?

After a few years of being a physical therapist, I wanted to get back into sport.  I met with Bill Parisi and knew I had to be involved with his concept of sports performance training for athletes.  I took a leap of faith, left my job, lived in a friend’s basement for 6 months and lived training day and night.   Now 13 years later, it is the best move I ever made.

Every week I was learning something new about training and business.  As the program grew, so did my client base.  I went from training 7 year olds to pros in every major sport and running a multi-million dollar business.  As the industry exploded, we began franchising the systems we created and now Parisi’s has almost 80 locations in over 30 states.  I am most proud to say the programming I have helped to create has influenced over 600,000 kids.  It is powerful to realize my work is helping so many athletes and coaches around the country.

5.  So you’ve trained a ton of populations in your time…from Olympic athletes to soccer moms. What population do you enjoy working with the most?

I have had a very diverse training population and even today, I still train kids, NFL’ers, UFC fighters and high school athletes.  I think in order to call yourself a trainer, you have to train and I keep my skills sharp by staying in the trenches.  I train groups as small as one-on-one and teams as big as 100 athletes. And then there are the seminars with hundreds of people too.  I think it is tough to decide with whom I like working the most.  The fighters are so disciplined and the kids are sponges that you can see changes almost from workout to workout.   I love the rush of watching my teams win or the excitement of a seminar group training hard together and supporting each other.  I guess I am going to have to be boring and say that I do not have a favorite population with which to work.  I honestly do enjoy all of them.  Maybe that is why I love what I do so much.

Years ago when I was still a therapist, I found that I was having particular trouble improving those patients of my mine that presented with foot problems.  Instead of getting frustrated by this, I got more fascinated on how I could help.  The more research I did, I realized that shoe wear seemed to be a culprit contributing to these problems that everyone seemed to ignore.  In addition to that, instead of training the foot, people were placed in situations to foster even more immobility.  So instead of putting people in boots, I took their shoes off, trained the feet and started to see improvements.  I brought this concept into my training and have trained all my athletes barefoot ever since.

7. Having seen you speak on a couple different occasions, I think you could have succeeded at just about anything. If you weren’t involved in fitness, what do you think you’d be doing right now for work?

Thanks for the kind words.  I think the secret to my success has been as a result of my PHD.  Pig Headed Discipline that is.  When I get into something, I go 100% with everything I have, but I believe the key is that you have to be “into” what you do.  So, if I couldn’t be involved in fitness or sport, I would probably take what I have learned and attempt to be a full-time motivational speaker.  I have had the opportunity to present for corporate teams of Fortune 500 companies like Hasbro and Marriot and I really enjoy being on stage in front of a crowd.  If that is still too close to what I do, I would love to follow what a guy like Bear Grylls is doing.  I love to travel the world, see new places and challenge myself.

Bret’s note: I think he could have been an actor – this is still the best Youtube video any fitness professional has made. Viva La Resistance!

8. Okay one more question Martin. I just received your new Warrior Cardio book and am extremely impressed! Very high quality book, tons of exercise pictures and metabolic training routines, a nutrition plan by Dr. John Berardi, and a physiology lesson from Dr. Tony Caterisano. I can tell you put in a ton of effort into this book. Why should people be interested in it?

I am so glad that you like the book.  I have spent the last three years on it and I am really happy with how it came out.  At 401 pages, it is packed with both the science and practice behind metabolic training.  As this style of training has become more popular, I have seen training morph out of control into a haphazard free-for-all in which people are throwing safety and results to the wayside in exchange for fatigue and risk.  I wanted to create something that would at least develop the “how” behind the “what” and give people some guidelines for this style of training.  In Warrior Cardio, I deliver warmups and prehab routines as well as the training programs.  I was also ecstatic to get two of my mentors on board to help with the project.  I believe Berardi’s section alone is worth the price of this book and I can’t wait for people to see it. 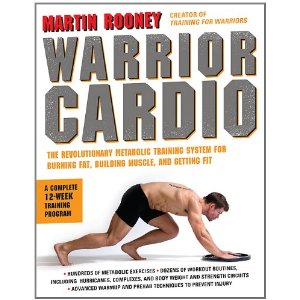