Today’s Ask-Bret-Contreras question was forwarded to me from my friend Marianne; a fellow trainer from Ireland. Marianne felt that I’d be better suited to answer this question than her. While I probably have more biomechanics knowledge about this exercise, she definitely has the greater booty! Check it out below. She also has a much better accent than me, but I digress.

Hi Marianne, ready for one of my technical questions? I was discussing with my trainer this morning and told him that I wanted to do single-leg hip thrusts the way you demonstrate them in this video (elevated shoulder and elevated foot, on the bench). He was telling me that by doing the single-leg hip thrusts on the floor I could obtain exactly the same results. Do you agree? (I don’t, but I would like to hear your opinion). Thanks, Bianca

Hey Bianca, you show great instincts by wanting a second opinion regarding this topic. Here is my answer: 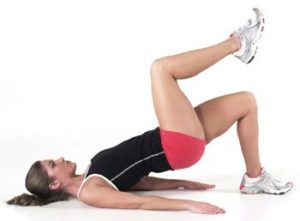 2. Range of motion increases by 250% when you elevate both the shoulders and the feet. Think about it like this. If I started doing bodyweight squats and push ups, but I only went a third of the way down, I could probably get a hundred reps of both lifts. But I wouldn’t be getting a stretch in any muscle, I wouldn’t be strenthening the initial ranges (only the end ranges), and I’d be using mostly my quads in the squat and my triceps in the push up. On the same line of reasoning, if I wanted to do bodyweight glute bridges, I could probably bust out 200-300 reps. But I’d be focusing on end range strength, the hamstrings wouldn’t receive a stretch, and I’d be using mostly the glutes.

Initial range hip extension involves a higher proportion of hamstring and adductor magnus contribution (as well as other adductors and the posterior fibers of the gluteus medius and minimus), while end range hip extension involves a higher proportion of gluteus maximus contribution. When full range of motion is used, suddenly the exercises become much more challenging. Switching from bodyweight partial squats to bodyweight full squats and from bodyweight partial push ups to bodyweight full range push ups, I’d probably struggle to get 50 reps in a row without stopping. And switching from bodyweight glute bridges to bodyweight hip thrusts… well…I actually know how many I can get. Back when I owned my training studio Lifts, one of my trainers challenged me to see if I could get 100 bodyweight hip thrusts off the Skorcher, a machine I invented that is similar to a shoulder and elevated hip thrust but let’s you use barbell and/or band resistance. I ended up getting 100 reps (he beat me and got 110 reps), but my glutes and adductor magnus were crippled for three to four days due to the fact that my muscular tissues weren’t accustomed to that rep range. I certainly won’t be doing that again anytime soon!

6. My guess is that the trainer has never performed the movements himself and he’s too naive to realize that the increased ROM makes the exercise much more challenging. Many times I’ve been guilty of making assumptions about exercises, only to find out that I was wrong when I finally got around to performing the exercise for the first time. This is why it’s so important for trainers to experiment and stay in good shape, so they can evaluate new exercises, methods, and programs. It’s also why trainers and coaches should not make assumptions!

I hope that answers your question! -BC

Topic of the Week #4 – Pushing and Pulling Ratios

Topic of the Week #4 – Pushing and Pulling Ratios