3 Things I Learned At The 2013 World Powerlifting Championships

Below is a guest post from my friend and training partner Charles Staley. Charles competed a few days ago in Las Vegas and went 9/9 (made all nine lifts). I was so happy for him! He pretty much moved down a weight class while retaining all of his strength, which is not easy for a seasoned lifter. Below are some tips for fellow powerlifters.

I recently returned from Las Vegas where I competed in the 100% Raw! Powerlifting federation’s World Championships as an age 50-54, 198-pound lifter (I competed last year as a 220 lifter). Perhaps even more gratifying than the win, was a handful of lessons that I learned along the way, and I thought I’d share them with you here today.

I always joke that I’d rather go without food than adequate sleep— sleep is that important to me. So the day before the competition, I gave a lot of thought to when I should turn in for the night, and also when to set my alarm. The competition started at 9 the following morning, and although I really didn’t know when I’d be up for my first attempt, I assumed it would be around 10am (and as it turns out, I was right.)

One consideration is to determine how long it takes you to be “fully awake” after your alarm goes off in the morning. For me, I think it’s about 2 hours. So I set my alarm for 7am when I went to bed (which was about 8pm — certainly much earlier than usual, but I think it paid off for me). Once up, I checked my bodyweight (I brought my bathroom scale with me to the hotel), ate a small meal that I had brought back to the hotel the night before (which I did to save time the next morning), and started caffeinating with non-paleo-friendly beverages.

As a related note, I find myself to be a bit anxious the night before a big meet, and I typically find myself preoccupied with stressful, negative thoughts as I’m trying to get to sleep. My solution for this is to conscientiously replace these anxiety-producing thoughts with relaxing, happy, positive thoughts. My thinking here is that you can’t hold stressful and relaxing thoughts in your head simultaneously. As I tried to get to sleep, every time my mind drifted to an anxious thought (and it happened numerous times, believe me), I’d quickly replace it with a calming one. Before too long l managed to fall asleep, which allowed me to wake up feeling fairly fresh and relaxed. I think a lot of people aren’t aware of the extend to which they can control their thoughts, and by extension, their mood, but I’m firm believer that it can be done.

TWO: The Squat Sets The Tone

When I competed at the 2012 World’s last year, I opened with a 330 squat, which received 3 white lights from the judges. Feeling confident, I asked for 374 for my second attempt. The lift was hard, but I felt confident about it, until I looked behind me, only to see 2 reds and a white! Looking over to one of the side judges, he told me “that was for depth.” I was stunned because (and please allow me a quick explanation) I have scar tissue in my right knee from two previous surgeries, which allows me to squat to legal depth, but no further — I can actually tell when I’m at legal depth because the scar in my knee tells me when I’ve hit the end of my range of motion. Videos of my squats confirm this, and in fact, the 374-attempt looked every bit as deep as the 330.

In any event, I knew I couldn’t go any deeper, and besides, the 374 took a lot out of me. I thought to myself “Well, I can’t give them anything deeper, so I guess I’m done squatting.” I decided to pass on my 3rd squat attempt, and I felt defeated. Although I benched pretty well, my deadlifts didn’t go well, relative to my expectations anyway. I simply felt demoralized after my squats, and I was never quite able to head my head right after that point.

I resolved that if I could help it, this would never happen again. In training this year, I paid special attention to sinking my squats as deeply as possible, experimenting with my stance so that it allowed for maximum depth, and asking Bret (who is my training partner in case you didn’t know) for feedback on depth for all my heavy squat attempts.

At the meet, I asked for an extra-conservative opener of 315. While waiting to approach the platform, I noticed that the competitor right ahead of me got 3 whites for what I thought was a very shallow squat. No matter — I sank my 315 as deep as I could and got 3 whites for my efforts. Although I only received 2 whites for my subsequent attempts of 359 and 385, you only need 2 out of 3 for a good lift, so I managed to go into the bench press event with 3 for 3 on my squats, an this did a lot for my confidence and energy levels, just as I thought it would. The bottom line is, if you start well, you’ll have a better shot at ending well. 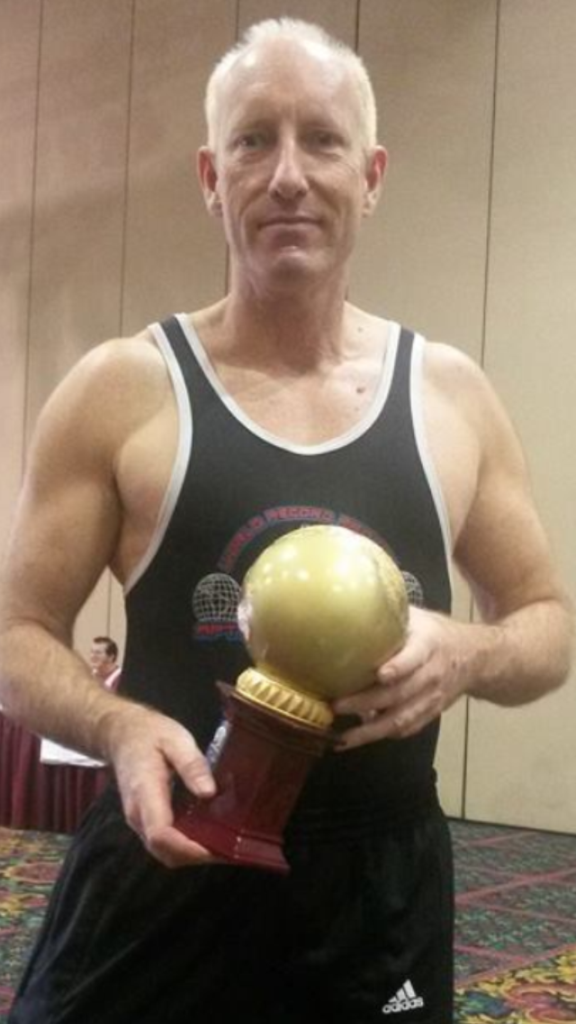 Powerlifting meets can, and often do make for very long days — 12 hours is not unusual in the sport. So this year, I made a conscientious effort to complete my lifts with the smallest amount of emotional energy expenditure possible. If you watch the video of my first squat in fact, you’ll see me joking around with the spotters before I approached the bar. I did need to rev myself up just a bit for my 359, and although I needed to fully psyched-up for my 385, I completed my squats still feeling pretty fresh. Bench pressing is, by definition, less exhausting than the other two events, and although I did pump myself up for my 3rd bench attempt, I still felt quite fresh going into my pulls.

On the deadlift (and after doing only 3 total warm-up reps backstage), I opened with a ridiculously easy 409 (I’ve hit 405×10 in training, which took almost nothing out of me. My second attempt was 459,which was a bit of an effort. I deliberated a bit about my 3rd attempt (at this point I had lifted 8 for 8), and although I would have loved to attempt a new PR of 515, I instead opted for 501, which I succeeded at, allowing me to lift 9 for 9 in my first meet as a 198-pound lifter. Incidentally, I ended up with a total that was 98.7% of my best total as a 220 lifter, and I have to credit Eric Helms for his excellent nutrition coaching, which allowed my to drop a full weight class without a significant drop in my total.

I hope these strategies are useful for you, whether you’re a competitive lifter or not. In either case though, I think it’s important to remember that competition can be an invaluable learning tool, and I’d like to urge all of you to compete, if only for this reason. And by the way, there’s really no reason not to compete. Honestly, if I can do it, you can do it!