Most people know that in a previous life I taught high school Mathematics and Science for six years, so it goes without saying that I’m a huge fan of research and science. However, it often takes researchers around a decade or so to “catch up” to the most brilliant trainers and practitioners.

Case in point: My friend Martin Rooney has been preaching the benefits of barefoot training for ten years now! Ever since the book Born to Run came out last year it incited a barefoot-training supernova. Now researchers are finally beginning to take a closer look at some of Martin’s “theories” about training and running sans shoes. If you had the foresight to implement Martin’s advice years ago and had your athletes or clients perform their warm-ups barefoot, you could have been ten years “ahead of the curve.” 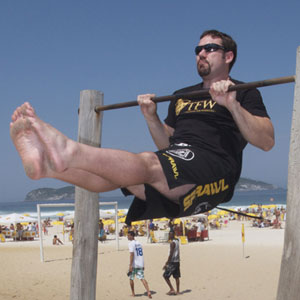 For years my friend Juan Carlos Santana has been extolling the virtues of band training and the “non-vertical vectors” that bands and pulleys allow one to train. The term “Functional Training” has grown in popularity and most trainers and coaches are programming most of their workouts in the standing position. While there are a myriad of amazing standing free weight exercises, bands and pulleys allow us to train various angles and load vectors that simply are not possible with standing free weight training. 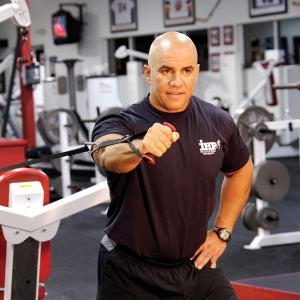 An often overlooked caveat to these band and pulley exercises is the tremendous workload they place on the musculature of the hips and core regions. Advanced lifters and athletes can get an amazing workout with just about any piece of equipment. For example, I’ve been lifting weights for 17 years and I’ve found that I’m able to get an amazing full body workout with almost anything…my own bodyweight, a pair of dumbbells, a loaded barbell, or a kettelbell. A simple pair of JC extra heavy bands may very well be the best single piece of training equipment that allows for a functional full-body workout. As you watch the video below, try to envision the amount of tension on not only the prime-movers of the various exercises, but also the glutes, abdominals, obliques, adductors, hip flexors, erector spinae, hip rotators, and other core muscles during standing exercises. The best part about band training is that the stronger you get, the better of a full-body workout you receive since you have to stand further out to get optimal tension on the intended musculature which leads to increased demand of the stabilizing musculature of the hips and core regions.

Last night I thought up all the different exercises one could perform with a simple pair of JC Bands. I was pretty impressed with myself as I hadn’t thought of some of these movements until I sat down and wrote them out. The exercises range from relatively simple to highly advanced. I included many bodybuilding isolation type movements as well as sport-specific functional type movements. Again, try to get a sense of the amount of core-stabilization required during some of the standing exercises in the video. For example, a standing single arm fly may appear to be a simple chest isolation movement, however it is also an example of an “anti-rotation” core exercise which challenges many of the muscles in the core and hips, namely the glutes, hip rotators, multifidi, and obliques. This is multiplanar, multidirectional training at its best folks! It’s also worth mentioning that the shoulder stabilizers get hit extra hard during pressing movements due to increased stabilization efforts.

I believe that in due time researchers will prove how immensely valuable band training is in relation to training the body to work as a functional, cohesive unit and teaching the body’s upper, core, and lower body muscles to coordinate and summate forces to produce explosive movement.

Warning: Watching this video may compel you to engage in an impromptu workout!