Pull Ups Made Easier and Better

Bret’s intro: Here’s a guest article from Max Shank. Max emailed me the other day because he read a pull-up article I wrote and the thought I’d appreciate the video tip embedded in this article. I watched the video and agreed with the rationale, but then I taught a couple of my clients the technique, and two of them set immediate PRs that day. My client Camille could only get one pull up, and after two weeks of employing the technique that Max described, she’s now busting out 3 pull ups like a boss. I think she’ll be doing 5 within another month. I hope you read the article, watch Max’s videos, and test out the ideas.

Pull Ups Made Easier and Better
By Max Shank

I’ve gone back and forth with many different methods in terms of teaching, cuing, and progressing someone to a pull-up. I fortunately have the luxury of owning a gym where I have a large sample of guinea pigs  willing gym members at varying stages of pull ups or chin ups.

There is statistically a clear and obvious separation between men and women, and where they struggle during the pull-up.

In general, Women struggle at the start to put their scapulae in the right place and keep their shoulders out of their ears.

Men tend to be stronger (and stiffer) in the shoulders which makes the initial pull easier, but owning the top position significantly more difficult. I can think of several people off the top of my head who could do 10 pullups on day 1 but couldn’t hold the top position for more than 1-2 seconds.

It’s all about the joint angles, baby.

When you initiate the pull with your torso perpendicular to the floor, your GH joint is at a disadvantaged position, requiring you to have ridiculously strong, mobile, and coordinated scapular movement to set you up properly to pull. Conversely the strength curve of a horizontal row is just the opposite. The initial movement puts you at the greatest leverage, while the top position (fully contracted) is the most challenging and requires the most strength. This also has to do with leverage and joint position

So in short, we are going to make the initial pull, more like that of a row, which will help recruit the lats, and avoid hyperactive upper traps and ear-shoulder-syndrome.

You can see how to do it here:

Note that the movement is like a closing jackknife. You initiate the movement by opening the joint angle and finish the movement by engaging the abs and strongly closing everything back together. Every video I’ve ever seen of anyone doing a one arm chinup (myself included) follows this basic rhythm of opening and closing.

If your shoulder mobility sucks, you are working against gravity, and the residual tension of your muscles. Think like a band resisted deadlift where the bands make the weight feel like 1000lbs at the top but 400 at the bottom. You might be able to cheat it up there with some momentum, but it ain’t staying there. This is a problem.

Fix it by mobilizing the pecs, shoulders, and thoracic spine so you can own that top position. Then own it with this cool drill here:

In the video I’m using end range isometrics to focus on owning that position using a martial arts belt. As far as mobilization is concerned I like to work in some thoracic bridges to open up the thoracic spine, then afterward address the pecs with some tabletop bridges–though there are a plethora of choices for both of those areas.

Furthermore I should mention that for most people, most of the time, I like to do neutral, supinated, or ring pullups. The reason being is that most people can’t do a palms forward pull-up and have the top position look good or posturally beneficial. I’ll take that extra external rotation any day of the week if I can, provided it doesn’t aggravate the elbows, which is also usually a problem that stems from tight shoulders or thoracic spine.

Still can’t quite get that pull-up yet? Hammer away at some with the assistance of a partner or work those muscles with some horizontal rows until you build up the adequate strength.

Max is an author, coach, and owner of Ambition Athletics in Encinitas, CA. He also competes in a wide variety of sports ranging from Muay Thai and Jiu Jitsu to Scottish Highland Games. 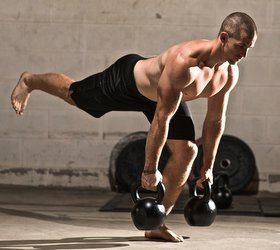 Max’s desire to constantly improve his knowledge and personal skills has led him to be a sought after international presenter of his unique and pragmatic blend of strength, flexibility, health, and overall athleticism. Follow Max at these links:

A Long-Term Plan to Build the Deadlift

A Long-Term Plan to Build the Deadlift