Is Your Training Program Design What You Think It Is?

Today’s article is a guest-post by Rob Panariello. Rob has written a number of great articles for my site over the past couple of years and is a top notch strength coach and physical therapist. You won’t find many guys out there with Rob’s level of experience (click HERE and look at question #1 to see Rob’s vast education and experience).

This past spring I received a telephone call from a friend whom I hadn’t spoken to in quite a while. When I answered the call I heard the distinct voice state, “Rob, its Bill Parcells. I’d like some advice from you”. I told Bill it was great to hear from him and that I hoped I had an answer for him as well. I was initially introduced to Bill Parcells during my years working the football off-seasons with my good friend and Hall of Fame Strength and Conditioning (S&C) Coach Johnny Parker at Giants Stadium with the NFL NY Giants. Our relationship continued through Coach Parcells’ years as the Head Coach of the NFL’s NY Jets (where he sent me some of his players to rehab), and the Dallas Cowboys. Throughout our friendship I have very much enjoyed my time and conversations with him, especially on the occasions when we had dinner together. Bill Parcells is one of the wisest men I know. It is certainly no surprise that he was recently elected to the NFL Hall of Fame. 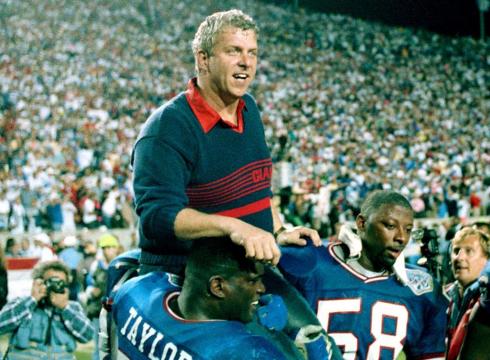 Coach Parcells and I continued to speak weekly and I eventually arranged to drive to upstate New York to spend the day with him. It was a real pleasure to visit with him once again. During our time together our conversations ranged from family and business to the motivation of staff and players, how to build a successful organization, and a little bit about life in general. As usual, his perspective on these various subject matters was both informative and to the point. During our discussion on the topic of coaching athletes, included in the advice he provided to me was the statement, “Rob, know what’s important and don’t worry about the rest”. I immediately recalled him making this same comment to me years ago when we had dined together; it’s advice I have never forgotten. It’s also ironic that Coach Parker and I had recently discussed this same advice as Johnny had also acquired it from Coach Parcells during his tenure with the NY Giants.

Three weeks later I received a telephone call from Coach Parker asking me if I would be interested in accompanying him to a Big 12 school where he was asked to present on the topic of Training Program Design to the S&C Staff by his good friend who held the University’s position of Assistant Athletic Director for Athletic Performance.  Johnny explained that he was planning to present the principals of program design that both he and I had been taught years ago by a former Soviet Weightlifter who later in his career had also become a Soviet Weightlifting Coach. We had both studied together with this Soviet Coach for approximately five years. Coach Parker felt that since I was also very well versed with this specific system of program design, I could assist him with his presentation. I appreciated Coach Parker’s offer to work with him once again and informed him that I was also friendly with the Head football S&C Coach at this institution, thus I agreed to accompany him.

During our time together both Coach Parker and I were very impressed with the organization, implementation, skills, and discipline of the training program, S&C staff and football athletes. Running Drills and Weightlifting techniques were performed admirably and all of the S&C staff’s instructions and teaching proficiencies were outstanding as well. “Classroom” sessions were planned for the S&C staff, as Coach Parker would lead the instruction on the topic of program design. At the start of the first classroom session each of the S&C staff was asked to list, in priority, their opinion of the most important “exercises of foundation” for their training programs. In review of the answers provided, the top two exercises listed, regardless of the exercise order, were the squat and the Olympic lifts. When informed of this, none of the S&C staff appeared surprised. However, this would change in a very brief period of time.

Prior to our arrival, Coach Parker and I had discussed the off-season football training program provided to him, specifically examining the weight room exercises and their programmed volumes and intensities. Although it was stated that the squat and the Olympic lifts were the two most important exercises in the program design, a review of these program components revealed that only 7% of the total program volume was implemented for the performance of the Olympic lifts and the volume assigned to the squat exercise performance was not much higher. To say the S&C staff was surprised when receiving this information is an understatement. 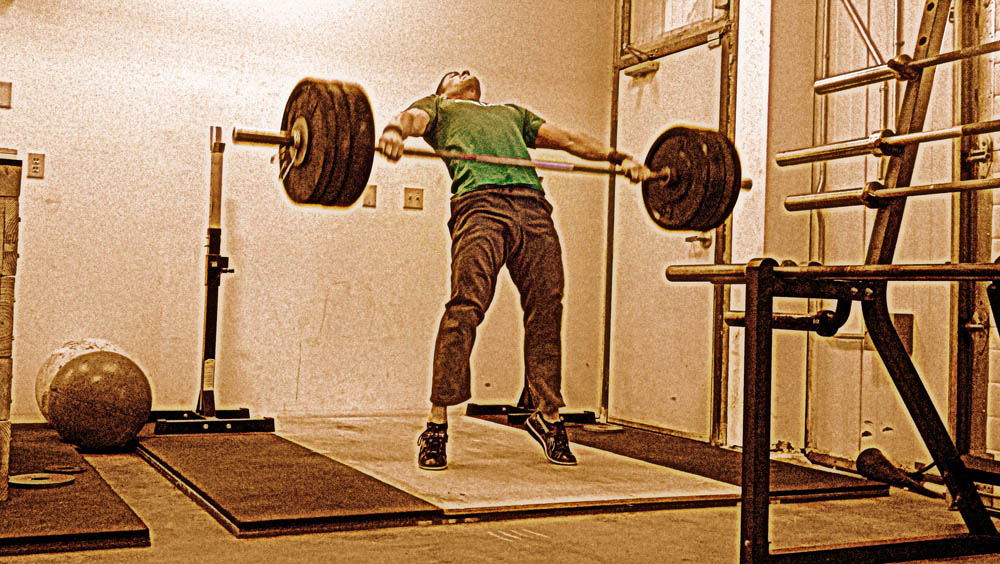 So how did this deficiency in the Olympic lifts and squat exercise program design volume transpire? Presently there are so many exercises and exercise variations advertised and available to the S&C Professional for selection into a training program design a coach may hesitate to not include many of these exercises for fear of placing their team at a disadvantage. As a result a greater total number of exercises are now required for the athlete to execute. Hence, with the incorporation of a high number of exercises to perform one may inquire is enough volume (work) assigned to the program’s foundation exercises? A suitable pre-determined overall program as well as specific exercise volume is a critical component of the program design. Too low a training volume and adaptation for optimal performance will not likely occur. Programming an excessively high training volume will likely result in negative consequences i.e. fatigue, and possible injury. The S&C Coach may include a high number of additional exercises to be distributed over this pre-determined training program volume to “cover all bases” so to speak. As a result, the exercises considered to be the most important then sacrifice their ideal training capacity due to the volume of work that is lost to other (i.e. assistance) exercises.  Consequently, if the exercises that are considered to be the foundation of the training program lack the necessary volume of work for the most favorable training results, is the prescribed training program really the program that the S&C Professional believes it is? In other words, has the S&C Professional acknowledged what is important, but failed to forget the rest. 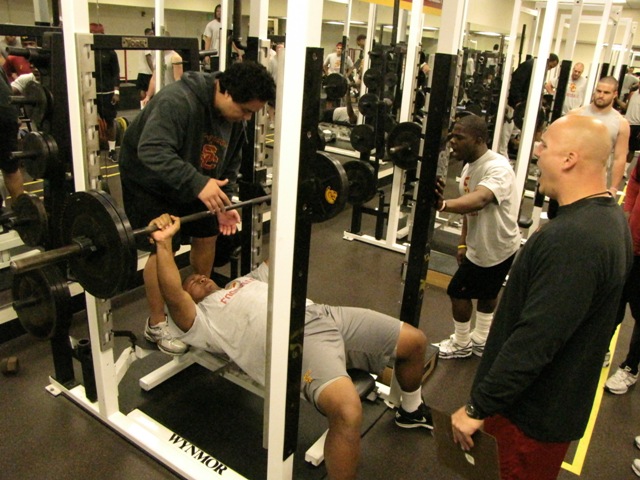 During the development of the training program design, there are situations where some of the additionally prescribed exercises may not be necessary for inclusion in the athlete’s training. Coaches may include many advertised exercises mainly for the concern of the possible consequences and lost benefits that may occur by not incorporating them. This is not to imply that assistance exercises are not important to the program design, but they should be included in an appropriate manner. What is often disregarded with the inclusion of an excessive number of programmed exercises is that the exercises deemed “most important”, (a) are not actually emphasized and as a consequence of this program design philosophy, an inadequate application of volume to these exercise performances ensues and (b) the exercises of foundation more often than not, also optimally incorporate the same muscle groups and physical qualities of these additionally prescribed exercises. So one may ask, are some of these additional prescribed exercises really necessary, as they may simply be duplicating the work of the training programs pre-determined exercises of foundation? Only when the exercises deemed the foundation of the training program achieve an appropriate training volume (and intensities) will the most favorable training adaptations occur.

There are numerous training philosophies and opinions regarding the selection of exercises to be considered as the foundation of an athlete’s training program. It is important to remember why these exercises have been selected. These choice exercises are essential for the enhancement of the physical qualities necessary for optimal performance in the arena of athletics. If this were not true why then would these exercises even be a consideration? The S&C Coach must also contemplate the necessity for the implementation of additional exercises that may result in the duplicate training of these aforementioned foundation exercises of training. Where is the logic in prescribing a volume of valuable work away from the essential exercises of the program design in exchange for the addition of exercises that may simply replicate what is accomplished during the proficient training of the program’s foundation? This dilemma will often emerge during the development of a training program design. When faced with the predicament of selection from the limitless number of advertised exercises available for consideration into an athlete’s performance enhancement training program, one should recall the words of a very wise Hall of Fame Football Coach, “Know what’s important and don’t worry about the rest”. 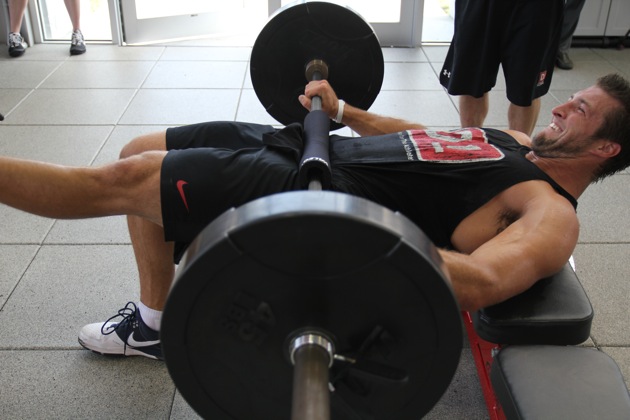