Today’s article is a guest blog from Bruce Mendoza. See his bio at the bottom of the article. I’m very happy to post this as it’s such a beautiful story and illustrates the power that personal trainers have in positively impacting their clients’ lives. Great job Bruce & Nicole, you’re both inspiring!

Nicole Stevens was not a sprinter or runner…

Her journey began in December 2010 when she was a sophomore in high school. Her dad brought her to me because she was constantly hurting her low back and shoulders from cheerleading (she was a base).

We always worked on proper form not only with lifting but with her body movements as well, since I know that practice makes permanent.

She loved the feeling of gaining strength and noticed that the stronger she got, the less low back pain she experienced. In fact, she ended up enjoying strength training so much that she decided to compete in a powerlifting meet. After 4 months of getting her body moving correctly, gaining strength, and gaining confidence, she went for it. Nicoleʼs results from a 2011 USPA raw sanctioned meet were a 121 pound squat, an 88 pound bench press, and a 203 pound deadlift (412 pound total) in the 123-132 weight class.

At this point in time a friend of mine introduced me to a crazy trainer dude named Bret Contreras. Our training shifted to focus on different load vectors including the horizontal vector, and we stared prioritizing hip thrusts, paying more attention to glute activation, and examining EMG evidence. I shifted the focus in training with all of my clients at my Santa Barbara based gym in California.

I began to realize that the hip extensors are critical and my mission was to activate them and use them as much as possible by choosing the right movements with the assistance of Bretʼs Glutei Maximi ebook. We all began to feel better, get stronger and look more well-rounded, pun intended! During Nicole’s first hip thrusting session she used 0 pounds (just bodyweight).

After consistently using our new training methods these were her results in 2013 USPA sanctioned meets:

As you can see, her glutes are strong as an ox. Here’s where things get crazy.

When she left for college, she wanted to try out for track and do sprints. She was worried about embarrassing herself by being the slowest one on the team. I suspected that she would be ok because of the proper training that we conducted. However, I was not quite prepared for the news I was about to receive.

On August 28th, 2013, I received a text message that stated the following:

Bruce, I got the fastest 60 meter time out of all the girls!

Prior to deciding to try out for Track & Field, she literally never ran, ever! And she’s now the fastest girl on the team.

Weighted hip thrusts changed her overall strength more than any other exercise. They’ve positively influence my own strength as well as everyone I train. In fact, I noticed more strength out of the hole when squatting, better lockout strength when deadlifting, and even more stability when bench pressing. It’s funny because we have a Crossfit at the gym and I’ve gotten them to do hip thrusts part of their training. They call the movement “Bruces” in my honor since I’m always talking about how important the glutes are and telling them to look up The Glute Guy. Since implementing weighted hip thrusts, every one of them has seen their Olympic lifts increase as well. Now they’re all sold! 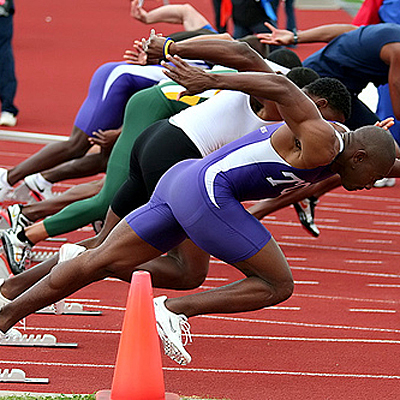 I’ve had several key mentors in Strength & Conditioning, including Louie Simmons & Stu McGill. But I’d like to pay special thanks to Bret Contreras. Bret, you’ve greatly impacted the way I train myself and others. It’s made a huge impact, and I’m thankful that I trusted you so that Nicole could benefit from your methods.

It will be interesting to see how Nicole improves with increased sprint practice and technique work. Although she’s laid down a great foundation of strength and force development, she surely has room for improvement with specificity and more work at higher velocities.

Bruce Mendoza is a 198 pound powerlifter with a 611 lb squat, 551 lb bench press, and 556 lb deadlift. His website, Science-Based Training, can be visited at www.brucemendoza.com. 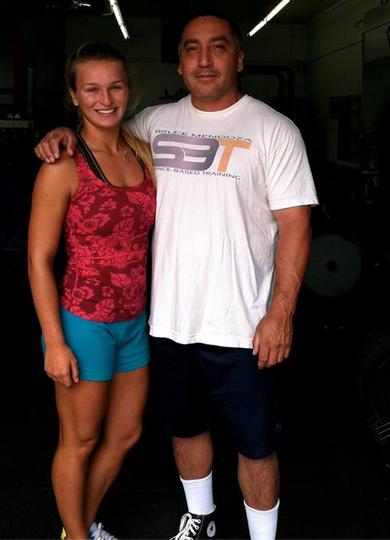