Today, I’ve got a cool case study for y’all. It comes from guest contributor Travis Pollen – a very astute up-and-comer in the field of strength & conditioning. Travis’s results closely mirror the results that I achieved when I tested myself five years ago with bodyweight bridging variations when collecting data for my glute eBook. However, Travis’s case study is quite unique in that he has a prosthetic limb on his left side, which made for a very interesting analysis. I hope you enjoy the article!

Which Glute Bridge is Best?: an Amputee Case Study
by Travis Pollen

It’s well known that the supine hip extension, commonly referred to as glute bridging, is a phenomenal exercise for strengthening the glutes. But with so many variations to choose from using bodyweight alone – feet and shoulders flat on the ground, feet elevated on a bench, shoulders elevated (AKA hip thrusts), unilateral, bilateral, isometric, and dynamic – I’ve long wondered which is best for building the glutes. Due to the complex interplay of moment arm length, muscle length-tension relationship, range of motion, and stability demands of each version of the exercise, I turned to electromyography (EMG) to help answer my question.

What is EMG, Anyway?

Surface EMG is a measure of the electrical activity of a muscle, as determined by an electrode secured to the skin directly over the belly of the muscle. Generally speaking, the higher the electrical signal, the harder the muscle is working. There are a few caveats to this rule, but for our purposes it’s a decent assumption.

Unprocessed, or raw, EMG signal (pictured below) is expressed in volts, which isn’t a particularly useful metric. To interpret the data, we must first determine the maximum activation that a muscle is capable of producing. This maximum voluntary isometric contraction (MVIC) is performed as a brief, all-out exertion (against either a fixed object or manual resistance) in the position that allows for the target muscle’s optimal force production. 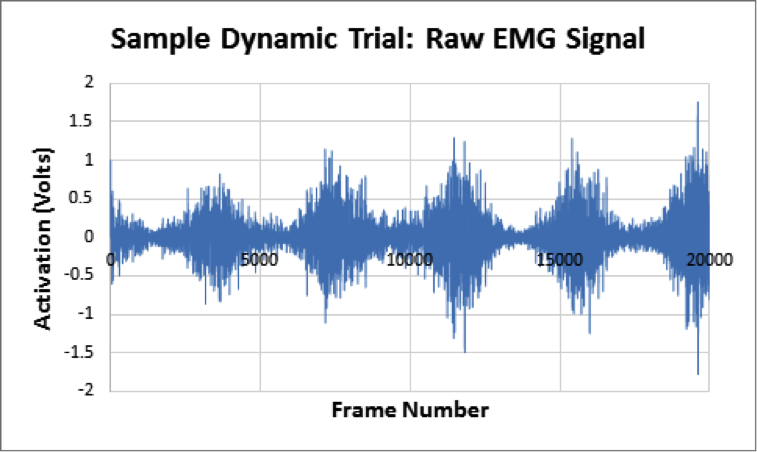 We then normalize (a fancy way of saying “divide”) all data from subsequent trials by the voltage obtained during the MVIC, which results in percentages of MVIC (% MVIC). According to the scientific literature, exercises with mean muscle activations of 60% MVIC or more are typically considered suitable for strengthening.

The present case study was performed on yours truly. I figured I’d make for an interesting test subject since I was born with proximal femoral focal deficiency (illustrated below), a rare congenital abnormality that resulted in the absence of my left femur and much of the accompanying musculature. (Fear not, though: my left glute is intact!). Thus, with my two sides alone, which I’ll refer to as “natural” and “prosthetic,” I can provide insights into both typical and altered muscle recruitment patterns. 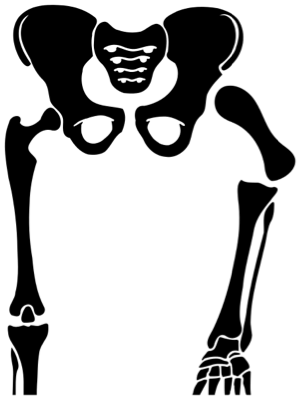 To perform the study, I used a Delsys Bagnoli 2-channel handheld EMG system consisting of two parallel bar surface electrodes (pictured below). After shaving and abrading the skin (special thanks to my girlfriend), I placed one sensor on each glute max parallel to the muscle fibers and halfway between the sacrum and the respective greater trochanters. I affixed the reference (ground) electrode to my ankle. 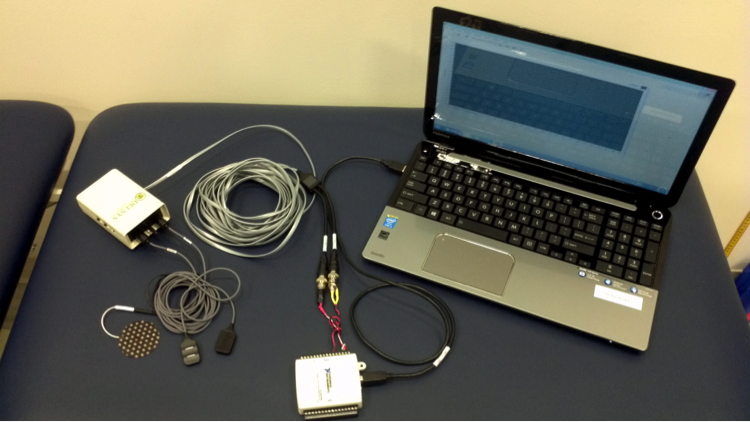 For the MVIC’s, I performed a manually resisted isometric quadruped hip extension (AKA donkey kick) on each side, collecting at a rate of 1000 samples per second. Next, I recorded five-second isometric holds for nine different bridging variations: three feet/shoulder positions (flat, feet-elevated, and shoulder-elevated) together with three leg positions (bilateral, natural side only, and prosthetic side only). Six of them are pictured below.

I also recorded 20-second trials of dynamic contractions (i.e. reps) for all the same exercises, utilizing a 2/0/2 tempo (two seconds up, two seconds down). The short trial durations were chosen to minimize the effects of fatigue, which is known to cause an increase in muscle activation. In addition, the order in which the exercises were performed was randomized with the same goal in mind.

Data Processing and Analysis (For the Techies)

As I alluded to earlier, a few things needed to be done to the raw EMG data in order to convert it to a useable format. This part gets a little technical, so be forewarned.

First, the data must be filtered to remove both high- and low-frequency content that isn’t physiologically based. Next, the data must be demeaned, meaning any overall offset from zero must be subtracted from each value. Then comes rectification, in which all the negative values are flipped to positives. A linear envelope is subsequently applied using a moving root-mean-square algorithm over 100-millisecond windows. Finally, the signals are normalized to the MVIC, resulting in the filtered EMG data used for analysis (pictured below). 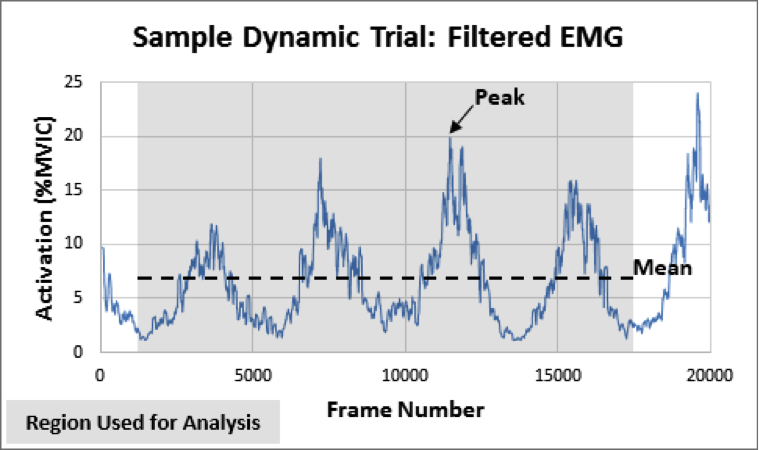 The metrics used for comparison of the various bridges were mean activation (the average activation over the entire trial) and peak activation (the maximum value obtained at any point during a trial). For the dynamic trials, only the middle four reps were included in the analysis.

And The Winner Is…

In general, the shoulder-elevated variations yielded the highest glute activation (in terms of both mean and peak), with flat bridging coming in a close second – especially on the prosthetic side – and feet-elevated bridging bringing up the rear, so to speak. The differences among feet and shoulder positions were greater for unilateral bridges than bilateral ones. The poor showing by the feet-elevated variations could be due to increased assistance from the hamstrings in that position.

On average, unilateral bridging elicited 2.3 times the activation (both mean and peak) of bilateral bridging for matched feet and shoulder positions, likely due to the additional stability demand in conjunction with the increased load. The greatest difference observed was between the unilateral and bilateral shoulder-elevated dynamic trials on the natural side (starred below), where the unilateral version had 3.8 times the activation of the bilateral counterpart. In short, the single leg hip thrust trumps the competition! 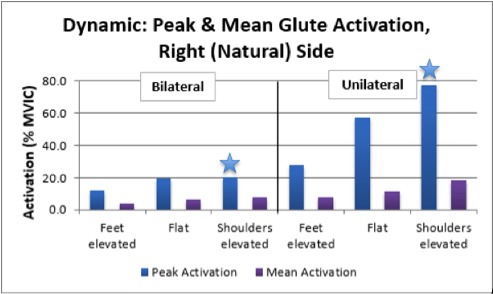 Across all trials, as percentages of MVIC the prosthetic side far exceeded the natural side. This means that the prosthetic side glute was working much closer to its maximum. Although the left versus right comparison tends to be muddied by precise electrode placement, the observed differences do make sense. My prosthetic side glute is much weaker than my natural one, so even bodyweight alone provides a big challenge. In fact, of all the variations tested, the only two that met the 60% MVIC mean activation threshold for strengthening were the prosthetic side unilateral flat and shoulder-elevated isometric holds (starred below). 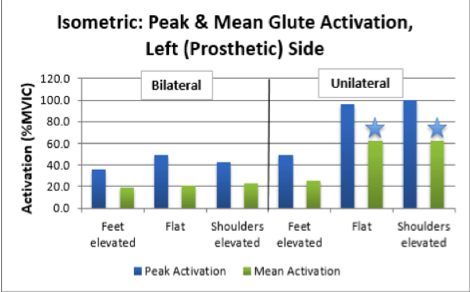 Interestingly, during all three unilateral dynamic trials on my prosthetic side (starred below), peak activation actually exceeded 100% of MVIC, with prosthetic side unilateral shoulder-elevated dynamic bridging (hip thrusts) coming in with a peak activation of a whopping 135%. Although these may seem like aberrant findings, it is not uncommon for muscles to activate to a greater extent during dynamic trials than during the MVIC. 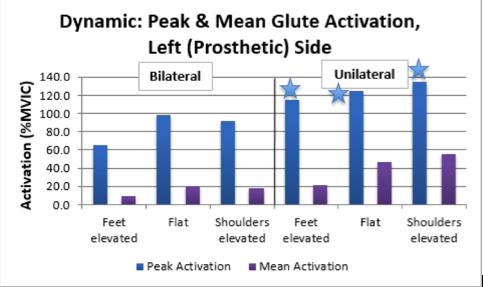 Bodyweight glute bridging can provide a significant training stimulus to the glutes, especially for individuals with weaker glutes. To intensify the exercise, bridge with any or all of the following modifications:

2. One leg at a time (unilateral), with the non-working limb tucked in towards the chest

3. Isometric hold in the extended position, by itself or immediately following a set of dynamic reps

4. Added external resistance in the form of a band, barbell, dumbbell, or chains

In the future, I plan to expand this study to test more subjects and muscles (especially the hamstrings) as well as more hip extension exercise variations, including feet- and shoulder-elevated hip thrusts, which I hypothesize will elicit even greater activation than the shoulder-elevated version.

Travis Pollen is an NPTI certified personal trainer and American record-holding Paralympic swimmer. He is currently pursuing his Master’s degree in Biomechanics and Movement Science at the University of Delaware. He has been featured on T-Nation.com, Schwarzenegger.com, MensHealth.com, and MOVE-Everywhere.com. He also blogs and posts videos of his “feats of strength” on his website, www.fitnesspollenator.com. Be sure to like him on Facebook at www.facebook.com/fitnesspollenator. 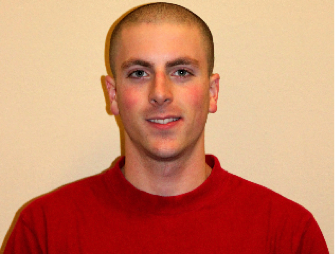