I’m very excited to present to you some incredible brand new technology. Imagine an iPhone app that allows athletes and coaches to:

Previously, this required expensive equipment, but now it’s available for mass usage if you have an iPhone or iPad. The app is called My Jump, and it can be yours today for only $6. Yes, you read that properly – just six dollars! In addition, My Jump:

I’ve longed for an invention like this for many years. Heck, I’d pay $6 for an app that simply calculated jump height, but this app goes the extra mile and tells me exactly how I should be training in order to best improve my vertical jump performance. How freakin’ cool is that?! You can use this app with your clients and athletes if you’re a personal training or strength coach, or to conduce experiments if you’re a sports science researcher.

Below is a guest article from the inventors of the app.

From the Lab to Your Pocket: Groundbreaking Lower-Limbs Power Measurement With Your iPhone

Introduction: Jump height as a measure of lower-limbs explosive performance

Explosive movements such as vertical jumps, change of direction, and the first few steps of running, are some of the most frequent activities in a wide range of sports (4,6,11). Basketball, soccer, volleyball, martial arts, and gymnastics each require explosive push-offs in order to succeed in several specific tasks in competition. Vertical jump performance has been used to assess these lower limb explosive capabilities. Many studies show that vertical jumping ability is a good indicator of lower-limbs strength, power or short sprint times (10,12). So, in fact, every athlete involved in any power/explosive sport would need to perform great jumps as a measure of his/her lower limbs explosive capabilities.

But vertical jumping ability not only represents the athletes’ explosive capabilities, it is also a great tool to know the levels of fatigue induced by training and practice (17). For example, it was demonstrated that the jump height decrease observed between the beginning and the end of a back squat training session is very highly correlated to the levels of blood lactate produced (a metabolite associated fatigue); thus, the higher the jump decreases, the higher the blood lactate concentrations.

For those reasons, many researchers have studied and designed different jumping tests to evaluate athletes’ lower limbs performance during the last decades (1,3,13). French scientist and pioneer of motion analysis Etienne-Jules Marey made one of the first attempts in history before 1900. 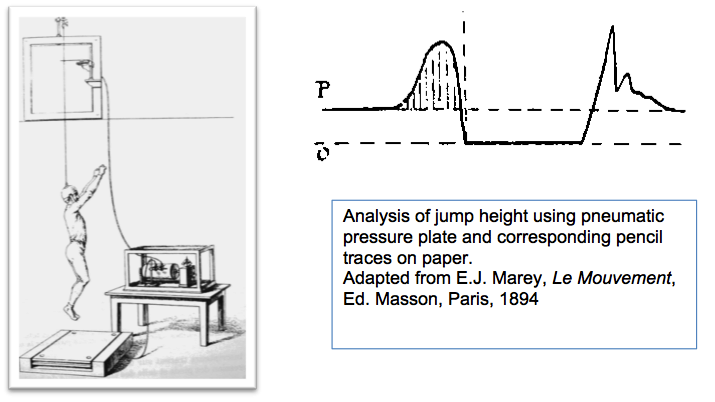 More recently, based on an equation derived from the Newtonian laws of motion, and used by Asmussen and Bonde-Petersen (1), Bosco designed a widespread battery of tests to assess jumping abilities. These tests included squat jumps, countermovement jumps, drop-jumps or repeated jumps.

However, the most popular tests focusing on explosive capabilities (i.e. squat jump and counter movement jump) have the main limitations of not providing power values or information about their force and velocity components. This is mainly because they do not account for the length of leg push-off distance during the push-off phase, which significantly influences power output. Even if mechanical power output is often estimated via regression equations based on jump height, this approach provides only an indirect estimation associated to a very poor accuracy.

To tackle these issues, Samozino and colleagues published a simple method allowing for simple and accurate computations of force, velocity and power outputs during a vertical jump, on the basis of body mass, lower limbs length and jump height (15).

Then, in order to know the full range of force and velocity capabilities of an athlete, these authors proposed, on the basis of several jumps with various additional loads, to draw the linear “force-velocity profile”. This relationship basically describes, for each individual, the entire profile of his/her force and velocity capability, from the theoretical maximal force “usually called F0”, to the theoretical maximal velocity (V0) the lower limbs neuromuscular system can produce. The slope of this relationship, i.e. the F-V profile describes the orientation of the athlete’s system towards force or velocity qualities, and which of these mostly determine its power output (14).

The optimal Force-Velocity Profile approach to optimize your performance

Many studies have analyzed the effects of different training programs to improve vertical jump performance (6,8,18). However there is no consensus about what kind of loads and exercises should be used to improve explosive performance, since both heavy resistance training exercises (i.e. back squat with 85%RM) and light/ballistic exercises (i.e., 30%RM, plyometrics) have been probed to increase vertical jumping abilities. It is well known that power output depends on both the force and velocity produced in a certain exercise (15); therefore, increasing velocity (via high-speed, light exercises) or force (or maximal strength, via low-speed, heavy exercises) capabilities might increase vertical jump performance. The question is: in what proportion should we train force and velocity capabilities to best increase our athletes’ vertical jump height?

Samozino and colleagues recently showed, on the basis of a mathematical modeling of jump performance, that there is, for each individual, an optimal value of F-V profile (slope of the linear relationship) that maximizes (all other things, including maximal power, being equal) jump height (16). In other words, for a given maximal power, among the various force and velocity capabilities combinations that lead to these power qualities, only one will result in a maximized jump performance. This optimal combination, called “optimal force-velocity profile” is individual and can be easily determined using the simple method described above. Should your profile be too much force- or velocity-oriented compared to your optimal profile, your jump performance (and more in general, your explosive performance) is lower than what it could be. This analysis led to the concept of individual “force-velocity imbalance” and was shown to be directly related to jump performance (14). Research in progress will show how to “re-orient” athletes’ individual profile via individualized, optimized training regimen, and that this results in better improvements of jump height than traditional strength training not taking account of the individual F-V imbalance of the athletes (publication in process).

The F-V profile of the subject presented in the previous figure (black line) compared to his individual optimal profile computed from Samozino et al.’s 2012 equation (blue dashed line). The F-V imbalance (% difference between actual and optimal profiles) for this subject is 30%. This means that, for a same given maximal power output, should this subject train to increase his force capabilities in jumping, he will decrease his F-V imbalance, shift his profile towards his optimal value, and in turn increase his jump height. If, at the same time, he does not decrease his velocity capabilities, he would also increase his Pmax, and in turn increase his jump height to an even larger extent

My Jump app: Powerful & accurate jump measurements with your iPhone

As stated above, the measurement of the vertical jump height of the athletes is a simple input variable that can be used to provide great information about their lower-limb force-velocity-power capabilities and explosive performance ability, and in turn it helps optimize training programs to maximize gains. Thus, vertical jump assessment is a must for many S&C coaches. Sport scientists have been using different technologies, such as force, contact or infrared systems to accurately measure jump height (5,7,9). These technologies calculate the height of vertical jumps from the measurement of flight time, since fundamental laws of physics establish that the height reached by the center of mass of the subject depends on the time he/she is able to stay in the air during the jump (1).

This approach is highly accurate and it is widely used by sport scientists, researchers and coaches around the world; however, jump systems have a major drawback that prevent their use out of laboratories, Universities or big sports centers: they are still too expensive for regular coaches (for example, one of the most popular system, the Optojump, costs about $2,000). To avoid this great limitation and bring accurate vertical jump measurements to many sport coaches and field practitioners, Carlos Balsalobre, a Spanish sport scientist, designed an app for iPhone & iPad (named My Jump) that accurately calculates vertical jump height, as shown in the validation paper recently published in Journal of Sports Sciences (2).

To do this, My Jump uses the high-speed video recording on the iPhone 5s, iPhone 6/6 Plus or iPad Air 2 to record the vertical jumps (120 or 240 frames per second depending on the model). Measuring the height of a vertical jump with My Jump is quite simple: you have to record a video of the feet of the athlete while jumping, and then you just need to select the frame in which the subject leaves the ground and the frame in which he/she lands, and the app calculates the jump height through the flight time.

User interface of My Jump app. After a jump has been recorded, the user can navigate the video frame by frame to select the take-off and landing moments

To test its validity and reliability, Carlos and his colleagues measured 100 jumps in different subjects using My Jump and a $10,000 force platform simultaneously, and then compared the results. We are going to skip advanced statistics stuff but, basically, they showed that My Jump on an iPhone 5s (which records videos at 120 frames per second) provides jump height values with the same reliability as the force platform and a mean difference between these two systems of just 12mm. Moreover, the recent iPhone 6/6 Plus incorporates an enhanced high-speed camera of 240fps, so the accuracy is even better with these devices.

Recently, Pierre Samozino and JB Morin (see our recent interview of JB here) – the sport scientists and fathers of the optimal F-V profile method described above, collaborated with Carlos Balsalobre to incorporate the published F-V profile calculations (14–16) in the updated version of his app. After several weeks of design and validation testing, Carlos and the French iOS developer he works with, Francis Bonnin, were able to release the new version of My Jump that includes Pierre’s and JB’s Optimal F-V profile calculation. Therefore, My Jump can now be used to perform an advanced evaluation of the lower limbs explosive capabilities using just an iPhone or iPad. And that is how technology met science to simplify and improve field practice, packing the theory with several recent scientific publications and validated equations in an accurate <6$ mobile device app.

F-v profile results screen of My Jump. Optimal and actual F-v profiles, as well as F0, v0, Pmax and F-v imbalance are calculated.

The optimal F-V profile method is an excellent approach to evaluate your athletes’ lower-limbs explosive performance and can help to optimize your training programs taking into account the specific individual f-v capabilities of each subject.

This advanced lower-limbs evaluation can now be performed in an accurate, reliable, non-expensive way using My Jump in your iPhone or iPad. My Jump is available on the Appstore for just $5.99 – click HERE for the link. You can find more information about My Jump in its Twitter, Facebook or YouTube accounts.