Today’s article is another guest post from Rob Panariello. This one discusses whether or not it’s wise to use a bench when overhead pressing.

There are various exercises available for selection to enhance an athlete’s upper body strength and power qualities. Included in this accessible exercise selection are a number of specific overhead performance enhancement exercises, one being the overhead press. Often these overhead pressing type exercises are performed with the utilization of an exercise bench, and more explicitly, a bench with a backing. The diversely available types of benches with backings allow for multiple angles and positions of support for the athlete’s upper torso during the performance of these upper body pressing exercises. Commonly performed upper body performance enhancement exercises include, but are not limited to, the bench press, the incline bench press, the seated military press, and the seated behind the neck press to name a few. This article will discuss some of the considerations as part of the strength and conditioning coach’s decision making process for the possible utilization (or non-utilization) of a bench for overhead enhancement exercise performance. More specifically, this article will address the utilization of a bench backing during the athlete’s performance of the exercises that require the upper extremities to be fully extended overhead while creating shoulder elevation angles of approximately 150 -160 degrees (i.e. incline bench press) to 180 degrees (i.e. seated overhead press) during the athlete’s overhead enhancement exercise performance.

The Biomechanics and Function of the Scapula

Each scapula articulates on the posterior thorax region of the body establishing the highly mobile scapula-thoracic joint (STJ). A distinct portion of the scapula is the glenoid (the socket) component of the gleno-humeral joint (GHJ) of the shoulder girdle complex. Since the glenoid is one half of the GHJ, the position of the scapula in relation to the head of the humerous (the ball of the ball and socket joint) is imperative for proper positioning, mechanics and optimal shoulder function during overhead exercise performance. A disruption of this STJ-GHJ relationship may predispose the athlete to an increased risk of shoulder pathology as the program design for the athlete’s overhead enhancement exercise (or any exercise) performance is commonly repeated over time with appropriate increases in programmed exercise volumes and intensities over the course of the training cycle.

There are countless positional movements of the upper extremity; therefore the scapula must always be properly situated in relation to the head of the humerous (GHJ) via a combination of anatomical scapula positions occurring in various planes of motion. To ensure a proper humeral head contact position in the glenoid, the scapula may elevate, depress, protract, retract, internally rotate, externally rotate, anterior tilt, and posterior tilt, depending upon the athlete’s shoulder/arm position and specific direction/plane of motion. During the performance of the overhead arm elevation type exercise movement, generally the scapula will upwardly rotate (50 +/- 5 degrees), externally rotate (24 +/- 13 degrees) and posteriorly tilt 30 +/-13 degrees), thus ensuring the optimal contact position of the humeral head in the center of the glenoid, resulting in the clearance of the acromion/coracoacromial arch, preservation of the appropriate subacromial space for rotator cuff clearance, as well as allow for optimal dynamic muscle stability and function. As the upper extremities are lowered, the scapula will downwardly rotate, internally rotate, and anterior tilt, as the weighted implement lifted is returned to the starting exercise position.

Another important component during the overhead exercise performance is not only the position of the STJ in relation to the GHJ, but also the necessary STJ/GHJ “rhythm” that must occur for optimal shoulder girdle positioning during the overhead exercise effort to allow for clearance of the rotator cuff tendons in the subacromial space/coracoacromial arch, as well as allow for an optimal “length-tension” relationship (i.e. the overhead exercise is performed in the plane of the scapula) of all of the participating shoulder musculature that attach to both the scapula and humerous. These influences also contribute to the neurological “timing” of the overhead exercise motion, another critical factor to consider for the optimal joint movement position and muscular force output. This GHJ-STJ “rhythm” is often described as an initial “setting phase” during the first 30 degrees of elevation followed by a 2:1 GHJ to STJ ratio to 90 degrees of upper extremity elevation, and concluding with a 1:1 ratio from 90 degrees to 180 degrees of elevation. The total 180 degrees of shoulder elevation may also be expressed as a 120-degree contribution plus an addition 60-degree contribution of GHJ and STJ respectively. However, it has been documented that for heavy load elevation this GHJ to STJ ratio may change to up to 4.5 to 1. This is not surprising as it is necessary for proximal control (a stable platform as the scapula) for effective and efficient distal mobility (GHJ motion) with the application of a heavy load. However, with an approximate 4:1 GHJ to STJ heavy load elevation ratio this would change the total 180 degree shoulder elevation contribution to approximately 144 degrees plus an additional 36 degrees from the GHJ and STJ respectively. This information raises the question with heavy load elevation, as athletes may eventually lift “heavy” loads overhead, due to less of a scapula contribution to the total elevated motion, is there now a consequential decrease in the already narrow subacromial/coracoacrominal arch/space? If this is true, do we want the athlete to further affect scapula biomechanics with the addition of a bench backing during overhead exercise performance, as those effects will be discussed later in this article?

Although GHJ/STJ rhythm ratios may vary depending upon the load application during elevation, it is important to note is that whether or not a load is applied to the overhead shoulder range of motion, a contribution of various scapula positions and “rhythm” is essential for optimal shoulder exercise performance. Any disruption of these scapula movements/kinematics may also affect GHJ position, STJ/GHJ rhythm and timing, and last but not least, muscle force production. The coordination of efficient shoulder biomechanics and muscle function is imperative for the proper positioning of the shoulder girdle complex, resulting in the proper position of the acromion/coracoacromial arch and the maintenance of the already narrow subacrominal space to minimize possible shoulder pathologies such as rotator cuff impingement that may occur with repeated efforts of overhead athletic enhancement training performed over time. 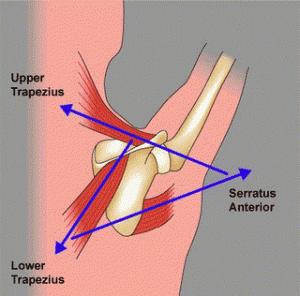 A simple definition of a force couple is two equal but oppositely directed forces not acting along the same line resulting in a rotation. The force couple at the scapula has been described as having upper and lower components, both functioning during upper extremity elevation. The upper component consists of the upper trapezius, levator scapulae, and superior portion of the serratus anterior muscles, while the lower component consists of the lower trapezius and inferior portion of the serratus anterior. Overhead exercise performance requires the appropriate function of the scapular force couple to ensure progressive improvement in exercise performance while minimizing the risk of shoulder pathology.

The Effect of Compressive Forces on Joint Stability

It is well documented that at the time increased forces are applied to joint surfaces; the subsequent increase in joint compression will result in enhanced joint stability. Steindler was one of the first authors to describe the principles of closed kinetic chain (CKC) exercise performance. As an example, during CKC exercise performance of the lower extremities, an enhanced amount of joint stability is provided through the tibio-femoral joint of the knee as an exercise is performed in a CKC (i.e. standing) position.

Another consideration is the mechanism of the application of this resulting scapula stability. Since these applied compressive forces are “pinning” the scapulae between the bench backing and posterior thorax of the body, for lack of a better term an “artificial platform” (stability) is established vs. the desired establishment of a secure platform that is due to the joint compressive and stabilizing forces that result from the active contraction of the scapula musculature. If enhanced scapula stability is now established via this “pinning” effect, is the force couple musculature of the scapula getting a “free ride” so to speak since they now play a less “active” role in securing scapula stability?

It has been demonstrated that individuals presenting with shoulder impingement pathology have associated decreased levels of serratus anterior activity, as well as a delay in the middle and lower trapezius activation. Over time this delayed response may lead to a domination of the upper trapezius muscle when compared to the muscle contribution of the previously discussed lower muscular component of the scapula force couple. The question then arises; will this “artificial stabilization” create an imbalance between the upper and lower components of the scapula force couple, resulting in an “abnormal” scapulohumeral position, rhythm, and timing during the performance of various other upper extremity enhancement exercises? Perhaps more importantly, will this “imbalance” transpire during the practice and performance of the athlete’s upper extremity “skill sets” (i.e. throwing, swinging, shooting, spiking, etc…) when performed (practiced) repeatedly now free of a bench backing, thus setting the stage for a possible shoulder pathology to occur?  If a shoulder pathology does present itself, will the athlete be participating in the athletic competition or be sitting on the bench?

Removal of the Bench for Overhead Exercise Performance

The posture assumed with the performance of standing overhead exercises (i.e. pressing, jerks, snatch, etc…) or seated overhead movements with the absence of a bench backing will allow for the freedom of movement of the STJ in association with the GHJ. This “freedom of movement” will ensure proper STJ-GHJ position, rhythm, efficient force couple and timing precision, as well as optimal length-tension of the shoulder musculature, resulting in optimal muscle force output and overhead exercise performance. The moment arm that is established via the distance from a fully extended arm (holding the weighted implement) to the scapula and gleno-humeral joint of the shoulder will ensure high activity of both the scapula and rotator cuff musculature (now properly positioned) which is both necessary and essential for optimal overhead enhancement exercise performance and continued exercise performance advancements. 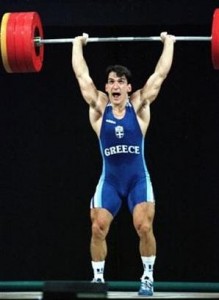 The #1 Reason Why You’re Not Getting Better

The #1 Reason Why You’re Not Getting Better