Here’s another article from Rob Panariello, a regular guest-poster on this blog. I’m sure you’ll like it!

Athlete’s genetically come in all shapes and sizes. As athletes of various height’s, dimensions, and body types (i.e. ectomorph, mesomorph, endomorph) do exist, so do the “general requirements” of the athlete’s physical stature for not only specific sports of participation, but for the various specific positions of play of each sport of participation. For example, a 5 foot tall 120 pound individual would not likely be a successful center on a basketball team, just as a 7 foot tall 290 pound individual would not likely have a successful career as a jockey. In the sport of American football, a 6 foot 5 inch 325 pound athlete is not likely to be successful at the position of wide receiver just as a 6 foot 2 inch 185 pound athlete is not likely to succeed at the position of offensive tackle. If the athlete’s physical stature is a factor for the acceptable partaking of specific sports of participation as well as the specific position played during such athletic participation, is it inconceivable to take into account the athlete’s physical stature may also be a consideration when designing training programs, and more specifically, the training programs of larger athletes of heavier body weights? 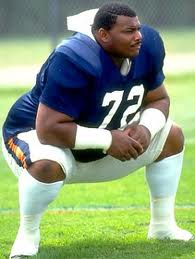 The importance for the consideration of the larger athlete’s body weight, particularly in the weight room component of the athlete’s training program design was imparted upon me and my good friend NFL and Hall of Fame Strength and Conditioning (S&C) Coach Johnny Parker during our estimated 4+ years of studying together with a former Soviet Weightlifter and eventual Soviet National Level Weightlifting coach named Gregorio Goldstein. This was one training program design principle that was utilized successfully throughout the years I worked with Coach Parker and his NFL NY Giant players during their off-season training, as well as with my athletes during my 10 years as the Head S&C Coach at St. John’s University of New York and with my players during my tenure as the Head S&C Coach of the World League of American Football New York/New Jersey Knights. This consideration (principle) is one that I still utilize in the training of larger athletes to this day.

Guidelines in the Program Design of the Larger Athlete

Prior to discussing the establishment of a weight room program design for athletes of larger (heavier) body weights, the following basic guidelines are important to be acknowledged.

The Zones of Intensity

The lighter weight athlete will usually have a greater relative strength level when compared to the larger, heavier athlete. However with the exact same prescribed exercise Zone of Intensity, the larger athlete is lifting a greater “absolute” load, thus this superior “absolute” load along with their accompanying heavier body weight may result in the exact same programmed back squat exercise performance to be more physically demanding upon the larger athlete. For example, a programmed calculation of the exercise weight for each Zone of Intensity is based upon a percentage of the athlete’s specific exercise 1 RM performance (i.e. 75% of 1 RM is correlated to Zone Intensity III). Although the “lighter” and the “heavier” athlete’s many both have their program design intensities calculated at the same percentage of their 1 RM, the prescribed “absolute load” of 75% (Zone III) for the “lighter” athlete’s 1 RM is not the same as the “absolute load” calculation of 75% (Zone III) load prescribed for the “heavier” athlete. The greater absolute intensity (load) of the larger athlete’s 1 RM will also result in greater absolute weight loads lifted in each Zone of Intensity when compared to the absolute loads lifted at the same corresponding Zones of Intensity by the lighter athlete.

Case in point, a 75% (Zone of Intensity III) intensity of the larger athlete’s 600 pound back squat is an absolute load of 450 pounds. When the larger athlete’s absolute load is compared to the same 75% back squat (Zone of Intensity III) intensity of the lighter athlete, this same prescribed back squat exercise percentage results in a load of 300 pounds. In fact the exact same Zone III programmed weight intensity of the larger athlete exceeds the 200 pound athlete’s absolute 1 RM MAX by approximately 12% (50 pounds).  Considering this information how would a S&C Professional expect a program design of their larger weight athletes to be exactly the same (i.e. perform the exact same total exercise volume) in each comparable Zone of Intensity as their peers of lighter body weights throughout the training period? If the heavier athlete is prescribed the same programmed accumulative work in all corresponding Zones of Intensity, how can these larger athletes possibly recover appropriately for future planned workouts to be performed over the entire prescribed training period?

“Smaller” athletes do not need the body mass of larger athletes, as the likely significant feature in their strength quality resume is speed. Greater body mass will likely result in a negative effect on running velocity, thus the smaller athlete may perform more total program design strength efforts with “principle” exercise work sets of 3 repetitions and the performance of “assistance” exercises at 5 or 6 repetitions when compared to the total program exercise design of the larger athletes.  Generally speaking strength training will increase both the athlete’s strength levels as well as their muscle hypertrophy. The application of a specific program repetition set design will place emphasis based on the needs of the athlete.

Athletes genetically derive in all shapes and sizes. When comparing the larger athlete to their smaller peer during their participation in competitive sports as well as the specific positions played in these competitive sports, there are obvious physical stature requirements and differences noted. Is it is not unreasonable for the S&C Professional to have the same considerations in the development of the larger athlete’s training program design as well?

How to Get Nice Glutes!

How to Get Nice Glutes!