I have never been very strong in the gym. I frequently joke around with my powerlifting friends at Revolution Training Systems, saying that if only the lifting community valued hip thrust, barbell curl, and calf raise prowess as the true measures of strength, I’d be hailed as one strong son of a bitch. Nevertheless, I’ve thoroughly enjoyed watching the strength of my lifting partners and clients over the years far surpass mine. However, this doesn’t stop me from trying to be the best that I can be. Even though the most I can hope for is to be mediocre in powerlifting, I think that choosing to not compete in powerlifting because I’m not that strong at the squat/bench/deadlift, even though I love the sport, would demonstrate a lack of true strength. As I wrote last year in “It’s My PR!“, I lift for me and me alone, and when I set a PR, I jump for joy regardless of how my strength compares to that of others. 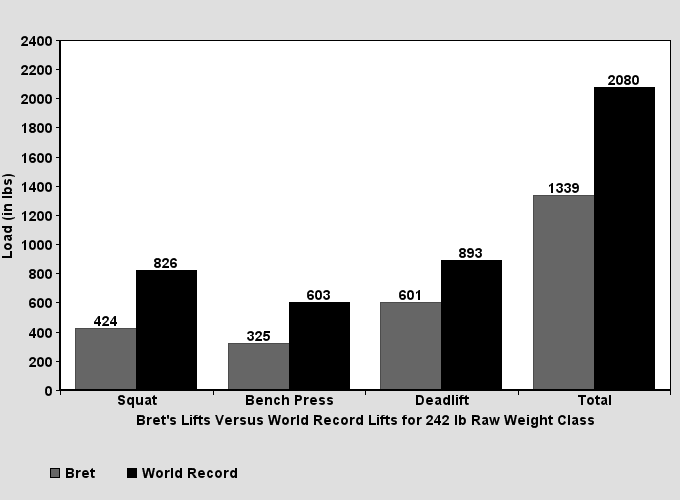 As you can see, my squat and bench strength is highly inferior to other powerlifters. I don’t see this as a bad thing, however, as I believe that my struggles have led to a far greater understanding of strength training. Not only have I extensively studied the physiology of muscle building genetics (see HERE), I’ve also extensively studied the mechanical advantages associated with powerlifting strength (my bonus product for 2×4 closely examined this). At any rate, my future powerlifting goals are to 1) total 1,400 in the next two years, 2) squat 500 lbs one day, 3) bench press 365 lbs one day, 4) deadlift 700 lbs one day, and 5) total 1,500 one day. A 675 lb deadlift in training would be badass too as that translates to 7 plates on each side of the bar. I’m 38 with old balls, but who knows, if I stick with it and stay healthy, I hope to continue to make gains. 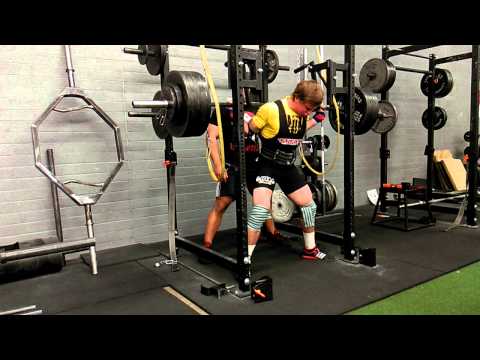 Wanna know something cool? There’s a lifter at Revolution by the name of Dane Steadman. He’s 17 years old, has never taken steroids, weighs 163 lbs, and has squatted 600 lbs, benched 385 lbs, deadlifted 551 lbs, and totaled 1,536 lbs (all raw with knee wraps). See HERE for a vid. So basically, my ultimate goal is to achieve a similar status as this 163 lb, 17 year old kid LOL.

The Week Prior to the Meet

Every lifter deloads uniquely. Some take their last heavy deadlift a month out, while others pull heavy around ten days out (I’ve even heard of some pulling heavy during the week of the competition). Some squat and bench heavy on the Monday before the meet, while others deload for the entire week and just stick to light loads (some don’t lift at all during the week prior to the meet).

I will train heavy on Monday with squats and bench and then do a light session on Wednesday before the meet. My conventional deadlifts had been feeling very heavy lately, with 565 lbs feeling like a ton two weeks prior. I’d been focusing on the squat for the entire prep, and this always negatively impacts my deadlifts. In theory, the squat builds the deadlift, so when it goes up the deadlift should too. But it doesn’t always work out this way; it’s easier to build strength on a particular lift when you prioritize it in training.

Three weeks out, I switched my squat stance from medium to wide and squeezed in five sessions with the wider stance. I’m always stronger with wide stance, but I like to squat (and deadlift) narrower for much of the year simply because I don’t want to beat up my hips. I want to be lifting heavy well into my 70’s if possible, so I take stance width into great consideration. What’s nice is that narrower stance lifting builds my wider stance lifting, and it only takes me a few sessions to groove my wide stance technique and retrain the muscles properly. Eight days out from the meet, I did my last heavy squat session and hit 385 lbs for an easy triple. I think I could have gotten 5 reps but I didn’t want to push it too hard.

During my Wednesday session, I just hit a few singles with 315 lbs for squats (I can squat 315 for around 8 reps) and a few singles with 275 lbs on the bench press (I can bench 275 for 6 reps). After my bench sets, a lightbulb suddenly went off in my head. Since my wide stance squats were feeling very strong, I wondered if my wide stance sumo deads would be stronger as well. I used to pull mostly sumo several years back, but my sumos had struggled over the past couple years, and my conventional and semi-sumo deads had been alternating back and forth in terms of my strongest pulling variation.

In the middle of last year, I hit a 601 lb semi-sumo deadlift (moderate stance width) in competition, and later last year, I hit a 605 lb conventional deadlift in training, but as I mentioned earlier, a 565 lbs conventional pull felt so incredibly heavy 10 days prior to Saturday’s meet. So on Wednesday, which was just 3 days before the meet, I decided to test my wide stance sumo deadlift strength just to see how if felt. 315 lbs felt like I could throw it through the roof, as did 405. I decided to try 495 lbs for a single and it felt like I could get around 6-8 reps. I realized that my wide stance sumo dl strength was in fact greater than my conventional and semi-sumo strength, so I decided that I’d go with this stance in the competition. I wished that I had at least one legitimate training session going wide under my belt, but unfortunately this was a last minute discovery. I took Thursday and Friday off from the gym and rested up.

I woke up, drove to weigh-ins, made weight for the 242 lb weight class (240 lbs), then went to Denny’s. Now, the majority of lifters will cut weight prior to the meet. Many of my buddies will lose around 10 lbs using cutting techniques and omitting liquid consumption during the day before the meet, but some can lose up to 20 lbs. Some will use diuretics, while others will do things such as alternate between a jacuzzi and a dry sauna for an hour or so. The goal is to make weight and then gain as much weight possible for the following day, assuming weigh-ins are the day before the meet (some meets have weigh-ins on the same day).

I chose not to cut at all for this meet as I weighed between 240 and 242 lbs for the several weeks prior to the meet. Usually, I can pig out and slam Gatorade all day long and end up weighing 10-12 lbs heavier the following day. This is a major advantage and can help make the difference between making or missing a 3rd lift in competition. So I went to Denny’s and ordered a milk, an orange juice, and a Lumberjack slam. This was the last meal I could keep down prior to the meet. I ended up either getting food poisoning or a stomach bug. I drank two smoothies later in the day, but was writhing in pain most of the night.

I woke up and weighed myself and found that I hadn’t gained a single pound; I was still at 240 lbs. However, my stomach was feeling a little bit better. I had the devil on one shoulder telling me to back out of the meet, and an angel on the other shoulder telling me to man up (or maybe it’s the other way around). I decided to do the meet because 1) it’s not like I’m about to break any records in powerlifting and have some huge reputation to protect, 2) I need more experience, 3) I’m a big believer in the notion that regular competing expedites results over the long run, and 4) I didn’t want the guys a Revolution thinking I’m a sissy or that I fabricated an illness. So off to the meet I went.

Boy was it a long day! Throughout the day, I probably puked 20 times. I threw up 3 times before my first squat, and at least once in between each lift. I was trying to stay hydrated so I’d drink some Gatorade, but then I’d vomit it up right after each lift.

I was in the first flight on all three lifts, which made me happy. I was all warmed up on squats, but the meet was delayed since two of the spotters never showed up. So we had to wait around 30 extra minutes in order for new spotters to arrive. This meant that we had to stay warm for squats the entire time, which was especially annoying given my persistent vomiting.

But it wasn’t just me who was struggling; all of the lifters were bombing lifts left and right. Toward the end of the bench press flights, my buddy Mike Peltz (owner of Revolution) was reviewing video footage with Dane Steadman (17 year old badass I mentioned earlier) and Dave Smith, and they discovered that the loads weren’t being calculated correctly. The association had failed to consider the weight of the clips, and this meant that every lift up until that moment was in fact 11 lbs heavier.

Therefore, I did in fact set squat and bench PR’s; I lifted 11 lbs more on both lifts than I did in last year’s meet. A PR is a PR! So I was very happy about this.

However, I had warmed up for deadlifts prior to the weight miscalculation fiasco, so we ended up having to wait around 40 extra minutes to deadlift since the judges were trying to get to the bottom of things. Therefore, I had to “re-warm-up” on deadlifts. I did a set of 20 back extensions and then pulled 405 lbs, then awaited my name to be called. I opened with 545, then I pulled 565. Both felt pretty easy, and I considered going for 601 again (which is what I got last year), but I decided against it and opted for 590. I ended up getting the 590 lbs, but it was tough! So I made the right call.

The meet started at 9 am and ended at around 11 pm, which made for a very long day. Many of my friends from Revolution kicked serious butt, which made me very happy. It’s great to be part of a team that helps each other out.

So all things considering, I’m happy with the outcome. If I had been able to put on an extra 10 lbs after weigh-ins and wasn’t puking relentlessly during the meet, I think I could have lifted an extra 11 lbs on each lift and totaled 33 lbs higher (which would have put me at a 1,372 total). But there’s always next meet, so this boosted my confidence. I ended up with an:

I was too exhausted to have people record videos of my lifts with my phone, but luckily my buddy Naveed took some video clips with his phone and sent them to me via Dropbox.

I will warn you, if you don’t like checking out creamy white man thighs, then don’t watch the vids. To all the tall lifters out there, please don’t ever purchase an Inzer singlet, unless you like having your nuts crushed. I felt like the suit added extra load to the squat and deadlift because I had to use extra erector strength just to counteract the spinal flexion moment induced by the singlet LOL. And it’s hard to maximize muscle activation when your nards are in your stomach. On a serious note, it is indeed distracting when your singlet doesn’t fit well, so I won’t be wearing this singlet again – lesson learned. Below are the videos:

Challenging Naudi Aguilar of Functional Patterns to a Debate

Challenging Naudi Aguilar of Functional Patterns to a Debate