Hey Bret, I can deadlift 200 pounds for 10 reps but my 1-rep max is only 225 lbs. Using various “rep-calculator formulas” you would think I’d be able to deadlift somewhere close to 300 pounds for one rep. What gives? – Gordon

Hey Gordon, don’t worry. You are not an alien, and your situation is quite common. Here are some things that you need to consider:

Humans vary considerably in fiber type proportions. I’ve seen estimates ranging from 20% fast-twitch muscle fibers in marathon runners to 90% fast-twitch muscle fibers in elite sprinters. On average, most humans possess a 50/50 split between fast and slow twitch fibers, but if you stray far from the norm, it will definitely influence your lifting and the rep-calculators won’t be very reliable. I’ve trained guys that are so fast-twitch that they can only get 3-reps with 80% of their 1RM. I’ve trained a couple of girls who were so slow twitch that they could get 30 reps with 80% of their 1RM.

In the deadlift, many people have a lot of trouble initiating the lift and getting the bar off the ground. I see this happen a lot with individuals who have performed RDL’s for years or have always performed deadlifts by unracking the bar and starting from the top position. People in this situation need to pull from the floor for several months in order for their starting strength to increase to the point where they feel strong from the bottom position. Deficit deadlifts help out in this regard too.

If you have terrible starting strength, you’ll suck at maxing out. However, you may be very good at repping out due to elastic strength and rebounding, which I’ll discuss below.

Some individuals possess great “reactive strength” or “elasticity,” which gives them an advantage when repping out in a deadlift. These individuals typically store a lot of energy in their hamstrings and recycle a higher proportion of their energy from one rep to the next. I know a lot of guys who pull 2 reps with their 1RM, meaning that whatever they can get for one rep, they can get for two reps because the second rep is so much easier due to elastic recoil in the muscles and tendons.

Rebound off the Floor

Coordinated lifters are able to lift with such symmetry that the plates on both sides of the bar hit the floor at the exact same time, thereby bouncing off the floor and providing some rebound. The type of surface factors in here, but I suspect that I get a 30 lb “rebound” off my platform at the bottom of the lift when I deadlift 405 lbs, which makes it much easier to get the bar going when repping out. Here’s an example of what I’m talking about:

For example, in the video above I pulled 405 for 12 reps. I haven’t done high reps in a really long time, and I bet that in a month of training specifically with 405 I could get up to 20 reps. However, once I reached 405 x 20 I bet that it would have no effect on my 1-RM, meaning that the extra strength-endurance wouldn’t benefit my limit strength in the deadlift.

Some people seem to have a limit or a “governor” that shuts their bodies down in order to prevent pain and/or injury. For example, every time I get up to 565-ish in the deadlift my body has a very hard time gettting stronger. While I strive to reach 600 one day, and I believe that I’ll get there, I suspect that the reason why my body has trouble getting there has something to do with my soft-tissue strength. My body doesn’t let me lift more weight because doing so would injure the musculature, ligaments, tendons, and/or discs of my lower back.

Genetics are a bitch, and there definitely appears to be a “genetic ceiling” for many people on certain lifts. For me it’s very hard to exceed 405 on the squat, 565 on the deadlift, and 315 on the bench press. I can do it with specialization, but it ain’t easy!

Having trained hundreds of women in the past several years, it’s quite apparent to me that a higher percentage of women are better at repping out than they are at maxing out. I’ve trained women who could deadlift 155 x 20 reps but their 1RM was only 175 lbs. Sounds crazy, but it’s true. There are certain men in this position too.

I could definitely think of more factors, such as anthropometry/somatotypes, technique, style of deadlift, etc., but I think you get the point.

For these reasons, I don’t like rep-calculators. In fact, in my entire lifting and training career, I’ve never given them much thought. They simply are not very accurate. A more important question is this:

Should I train primarily according to my strengths or my weaknesses in this regard. In other words, since I suck at maxing out should I train heavy more often or should I go lighter and rep out most of the time?

On the one hand, you won’t get much better at maxing out unless you practice heavy lifting over 95% of your 1RM. So if you want to get good at maxing, spend most of your time doing mutiple sets of heavy singles.

On the other hand, you get a much better training stimulus from going lighter, so if your goal is hypertrophy and body composition changes, then it may behoove you to focus more on multiple sets in the 8-12 rep range. Alternatively, you can focus on doing one all-out set in the 8-12 rep range too.

However, you also have to factor in recovery. Since you’re not very good at heavy lifting then it won’t drain you very much. For example, singles with 225 right now probably don’t tax your system too much, whereas sets of 200 x 10 probably take a lot out of you.

For this reason, I believe that the best approach is to practice a mixed approach and deadlift twice per week. Both sessions should involve 3-5 heavy singles followed by one higher rep set of 8-12 reps. 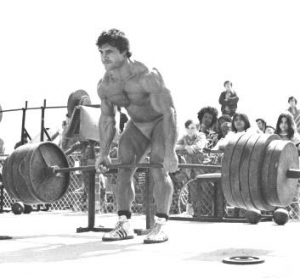