A Scientific Approach to Fitness: Applying the Hierarchy of Knowledge

Today’s post was written by my good friend Brad Schoenfeld. I asked Brad to write this for my readers when the topic came up in conversation a couple of weeks ago. I really like what Brad wrote because it is very important that we make good decisions in our fitness programming. This article will help you get a better picture of the types of knowledge that can be used to help you formulate proper conclusions. One of my goals is to try to help strength coaches become better critical thinkers, and I think that this hierarchy should be memorized so you can start to analyze what type of evidence you’re utilizing in order to make decisions in programming.

A Scientific Approach to Fitness: Applying the Hierarchy of Knowledge

You’ve no doubt heard the phrase, “Knowledge is power!” On the surface, this statement seems like a no-brainer. After all, our knowledge base influences everything we do in life, including our approach to fitness.

But if you think about it, what actually constitutes knowledge? Is it experience? What we read in books? What we learn from others?

To answer these questions, we can look at knowledge as existing on a hierarchy (Portney and Watkins, 2007). The following is an overview of this hierarchy:

Tradition: Tradition constitutes the most basic form of knowledge. It can be defined as the acceptance of a given truth simply because it has always thought to be true. Although it is lowest on the hierarchal chain, tradition does have some value in our knowledge base. After all, tradition-derived knowledge is generally passed down based on what has been found to work for previous generations. You can make the argument that this type of knowledge has “stood the test of time.” However, if all we ever relied on was tradition, we’d still believe the world is flat and that the sun orbits the earth. The misguided use of tradition in the fitness field is rampant. For instance, a majority of those who lift weights perform the standard 3 sets of 10 reps for an exercise? Why? Invariably because “that’s the way it’s always been done.” The problem here is that such practices fail to consider whether there are better choices available and can suppress the quest for superior alternatives. Hence, knowledge from tradition should be viewed skeptically and employed only in the absence of other forms of knowledge.

Authority: Authority is the acceptance of a given truth because an “expert” says something is so. This is exemplified by the learning that takes place in the classroom, where knowledge is disseminated by the teacher and the student accepts the information as fact. It’s only logical to assume that the “expert” is knowledgeable about the topic of interest, right? Well, not necessarily. Problem is, experts are human and thus fallible. They form opinions based on various biases and sometimes cling to rigidly held beliefs even when there is evidence to the contrary. This is certainly the case in the fitness field. There are countless examples of fitness experts making unsupported claims that are blindly accepted by the general public. The late, great exercise scientist Mel Siff coined this “guruism” and it’s a primary cause for the numerous myths that exist as to exercise and nutrition. Bottom line: Simply because a fitness pro has an advanced degree does not necessarily mean he/she has all the answers and can’t be off base on a particular topic. Moreover, many so called “experts” achieve exalted status because they train celebrities and/or athletes, despite having little or no formal education in exercise science. So while expert opinion is a step above tradition, it must be taken in proper context. Listen and learn from the experts, but always defer to higher forms of knowledge when available.

Trial and error: Trial and error is a popular form of problem solving that involves trying out a given solution and evaluating its effectiveness. If the solution produces satisfactory results, it is adopted as a viable method; if not, it is discarded as useless. Intuition and creativity are essential here to develop alternative possibilities when a solution doesn’t work as desired. Fitness pros often use trial and error as the basis of their training. They’ll try out a routine or method (usually based on knowledge gleaned from tradition or authority) and decide whether or not it “works.” One little problem with the trial and error approach: It is highly unsystematic, failing to control for potential confounding variables and test alternative possibilities. Thus, you never know if the solution is applicable to a given situation. Moreover, you can’t be sure whether the “best” solution was found or if a better one potentially exists. The upshot: Trial and error can play a role in the acquisition of knowledge. In many cases it can help to spur future research. But it has significant limitations and therefore is best implemented only in the context of what we know from higher forms of knowledge.

Logical Reasoning: As the name implies, logical reasoning is a systematic process that combines personal experience, intellect, and formal systems of thought to acquire knowledge. Logical reasoning can be either deductive (where a theory is used to create hypotheses) or inductive (where generalizations are drawn from specific observations). Both inductive and deductive reasoning are essential aspects of research-oriented problem solving. That said, logical reasoning has limitations. Namely, just because something seems logical on the surface doesn’t mean that it is inherently true. There are numerous examples of this in the fitness field. Consider the concept of spot reduction. It may seem inherently logical that performing ab exercises would zap the fat in your midsection. Unfortunately, research has shown this isn’t the case. Despite the seeming logic, you can crunch until the cows come home but it won’t whittle away your spare tire. So while logical reasoning can and should be a valuable tool in acquiring knowledge, it ultimately needs to be validated by empirical testing.

The Scientific Method: The scientific method is at the top of the knowledge hierarchy. The scientific method can be defined as the “systematic, empirical, controlled, and critical examination of hypothetical propositions about the associations among natural phenomena” (Portney and Watkins, 2007). This is the process used in peer-reviewed research studies, where scientists set out to answer questions by empirical testing in a fashion that is as free from bias as possible. Now this in no way implies that research is without limitations. Far from it. For every study that says one thing, you can usually find one that shows the opposite. There are many factors that go into formulating and carrying out research, and all of these factors must be considered when developing evidence-based opinions. All things considered, however, the scientific method is the best method we have for knowledge acquisition, and should be employed whenever possible. 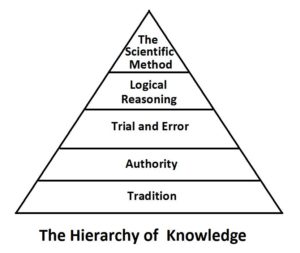 Okay, so now that we have an understanding of the hierarchy of knowledge, the bigger question is, How do we put it into practice? The answer is to start at the top. Seek out what research says on a topic. Consider the entire body of research available. If possible, find systematic reviews that consolidate information to maximize statistical power. The more research supporting a theory, the stronger the evidence that the theory has merit.

Once you have a firm grasp of the research, then utilize knowledge lower on the hierarchal chain to form an educated opinion on the topic. Realize that fitness is both a science and art. There is no pure scientific approach that overrides a person’s experience and creativity. Just remember, though, you can’t disassociate the art from the science that backs it up. To paraphrase an old saying: those who choose to ignore what is known from research are doomed to repeat the mistakes of the past. Provide you adhere to the hierarchy of knowledge, you won’t make such mistakes.

The 50 Commandments of Commercial Gym Etiquette

The 50 Commandments of Commercial Gym Etiquette