Thoracic Movement and Scapular Movement are Not the Same Thing

Today’s article is a guest post from Derrick Blanton. I hope you enjoy it!

Recently, Bret ran a kick-ass post that showed what really happens when big strong dudes pick up heavy shit off the ground.  Several comments echoed an oversimplification that I see quite frequently.

The thoracic spine either concentrically or eccentrically flexes voluntarily, or is overwhelmed by load, and flexes period.  The location of the scapulae may coincide with this process, but by itself will not cause flexion if the T-spine extensors are strong enough.

If you are holding your max DL with the spine at a significant angle to the floor, it is likely that both the T-spine is rounding, and the scaps are protracting.  But not necessarily.  Karwoski here has his scaps protracted big time.  But that T-spine looks pretty straight so far!

When you progressively challenge the spine with posteroanterior load, the scapulae eccentrically protracting are the first pair of weak link dominos to fall. The next domino in line is T-Spine eccentric flexion, but this one will likely require further load or time under tension to tank.  (And maybe not at all if you are fast off the floor, have freaky long arms, or are just massively strong up the back!)

By the same token, when the T-spine does round, the L-spine will generally hold its extension even further.  Most well trained DL’ers flex the L-spine little, if at all, even as the T-spine rounds like a fishing pole.

Realize also that there is a significant difference between passive, eccentrically controlled, or isometrically braced, protraction or flexion.  One involves hanging out on passive restraints, including the stretching of muscle, ligaments, fascia and such.  The other two add powerful muscular force to the mix, along with the action of the super molecule titin, and this makes for an enormous difference for your soft tissues.

Don’t assume that because a lifter is rounded or protracted that they are just lazily and sloppily hanging on soft tissue.  Konstantin looks different rounded over than your grandmother picking up the cat.

Let’s be honest, on max DLs you are hanging on for dear life.  Just be aware that past a point of rounding, eccentrically controlled or otherwise, the torque on the lumbar spine and burden on the thoracolumbar fascia will reach a tipping point, and the third energy leak domino, the L-spine, may fall.

As movement patterns go, thoracic flexion and scapular protraction certainly do often go together, leaning the torso forwards while simultaneously reaching forwards with the arms.  And their counterpart movements of thoracic extension and scapular retraction (with depression) often occur together as well.

I suspect this postural misunderstanding starts early in life.  When we were kids admonished to, “Stand up straight!“, our immediate response was to pull the shoulders down and back. This usually coincided with a hard crank of the lumbar spine pulling the ribcage up, and the pelvis into anterior tilt.  Presto!  We immediately appeared to have a straight upper back. But did we?

Image #1 below is “fake extension”. The giveaway that the lion’s share of the force is not coming from the T-spine extensors is the forward head posture and the elevated rib cage.  Incidentally, for all you upper trap demonizers, the UTs are about as deactivated as humanly possible, the “corrective” lower traps are uber-switched on, and the head is still lurching forwards.  Strange!

Image #2 demonstrates true T-spine extension. And yes, my hip flexors are tight in both pix.  I’m working on it! 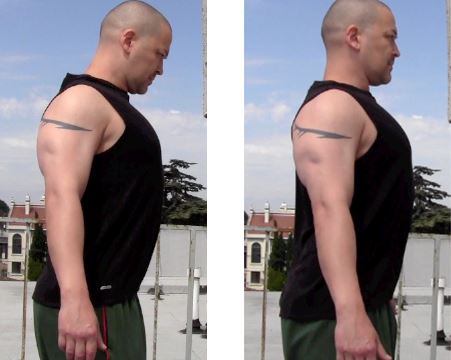 Finally look at the graphic in Image #3.  It demonstrates how excessive kyphosis at the T-spine all by itself can position the scapula at a precarious angle for your subacromial space. There is very little the scapular controllers can do to correct this situation.  It has to be solved at the T-spine extensor level. 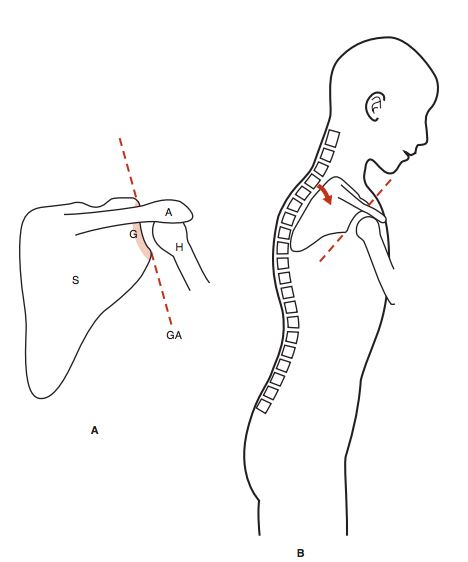 Image #1 illustrates the attempt to solve the Image #3 problem by yanking the scapula down and back.  But this strategy is doomed to fail.

Using fake extension strategy #1 is living a lie. And this lie will be exposed when we then ask our scaps to perform their other function: providing stability and dynamic force to move the arms, especially overhead.

On the Other Hand…

This is a tricky topic, and I’m going to muddy the waters a bit here.  Is there some truth to the notion that positioning the scaps down and back can erect the T-spine?  Yes, I think the scapular controllers can help move the T-spine into extension, albeit in a poorly leveraged, closed chain manner that renders them ineffective at supporting the arms.

This premise would be very difficult to prove or disprove, as to isolate the trap and rhomboid action, you would need to stop the T-extensors from firing at all.  Short of a massive Botox injection into the spinal erectors, I’m not sure how you would go about doing this.  But it does make sense to me that if the scapula pulls downwards that it will tug on the superior attachment and have a synergistic effect on the T-spine position.

However, in this substitution scenario, while we have now approximated an erect upper back with some clever lumbar and scapular sleight of hand, we now have nowhere to go with the arms. What happens when you go to move the arms forwards or up while still using your lower traps as a postural agent?  Awkward!

You will then find out right quick whether the T-extensors are firing strongly enough to support the entire upper back plus any anterior load, independent of scapular positioning.

I submit that it is very useful to uncouple these two muscle groups, and see where you really stand (pardon the pun) with your actual T-spine extension.  One way to do this is to hold a light barbell at a 45-degree angle, and explore four different combinations of movement.  Note the lumbar spine is in neutral during all the following scenarios: 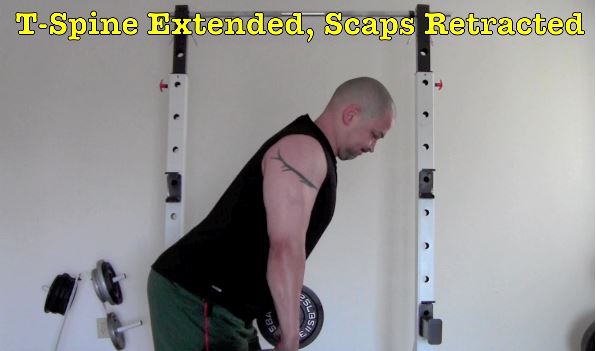 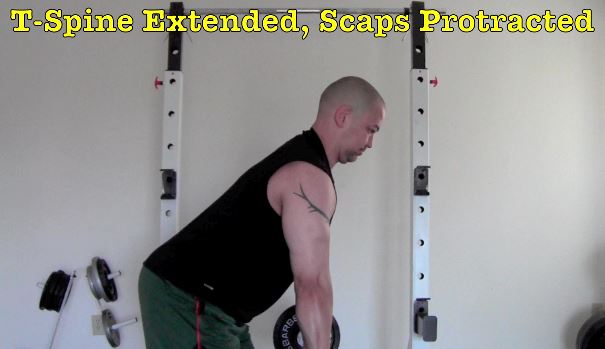 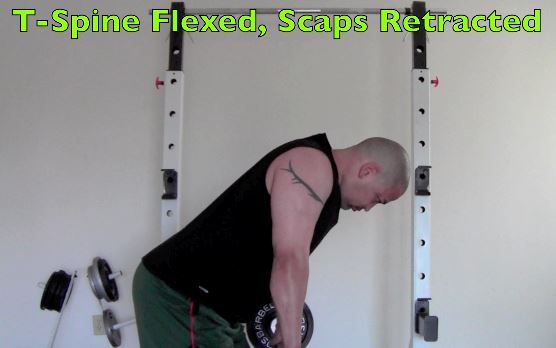 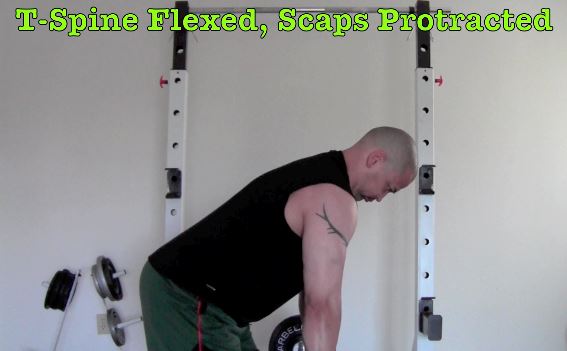 This last position is the lumbar at risk position, and can actually be a good teaching tool on how to generate stability from the hips.  Ah yes, the hips!

Use very light weight, and when you feel the L-spine complaining, screw those hips into the floor, and tighten those abs!  Voila! We just shifted the pivot point where it belongs onto the glutes, with abdominal support to buttress.

Perform a picture #4,2,1 sequence, and you are training the T-spine in an upper back good morning type fashion while also training the glutes and abs to stabilize the spine.  Challenging, but a great way to enhance your mind-muscle connections, and see where you are weakest.

I alluded to it earlier. When you get in the habit of substituting scapular position for true extension of the T-spine, then you are likely compensating for T-spine extensor weakness, which will have nasty ramifications when you try to move a load overhead.  Not to mention your general movement posture.

The T-spine extensors need to be the dominant stabilizing force of the upper back.  They must literally pull their own weight…plus.  When they provide sufficient force, the scapular controllers can better support the arms, and not be wrenched out of alignment trying to prop up the spine!

Here is the not so optimal scenario for lack of global bracing, and an over-reliance on local stability:

This has now turned into a group project where the lower traps are forced to do everybody’s assignment, and as a result, the project suffers!  Locking the scap down at the inferior angle will severely compromise the actions of the upper trap and serratus anterior. It is now quite difficult to “free the scap up” to glide up and around the T-spine for overhead humeral movement, especially horizontal flexion humeral movement, without losing T-spine extension and caving forwards.

This is because the T-spine extensors are either not strong enough, or are just in a terrible position to fire thanks to lousy stability below.  The CNS is now in a pickle.  If it lets the lower traps relent and allow the scaps to move, then the lazy ass T-extensors will be exposed, and you are going into a precarious situation, (load overhead), without true stability.

In this scenario, the upper traps do become a problem, as they must switch off, so as not to overcome lower traps, and throw the whole dysfunctional tower out of alignment.  But it’s not their fault your core stability is in the toilet!

I believe this is a common mechanism for how incorrect overhead pressing technique can injure people’s shoulders and low backs. A tremendous amount of attention gets placed on the scapula when we discuss overhead lifting.  But often the scapular controllers are really just caught in a terrible bind thanks to lousy core stability, particularly lousy thoracic extension.  The overhead press, or overhead anything, is an ab, hip, and T-spine extension exercise!  And sure, go ahead and hit the delts, tri’s, and traps while you’re at it!

I believe that the scapular controllers are not primarily designed to try and act as T-spine extensors, and prop up the upper back.  They assist in postural duties, sure.  But they also have other important stuff to do!

When you don’t stabilize globally with your hips and abs, you will find yourself over-stabilizing locally, and lounging on your lumbar spine.  Correct this stabilization pattern by doing as follows:

OK, now you’re good!  Sensing stability, your CNS will release the brakes on your traps and rhomboids. They are now freed up to better perform their primary functions as scapular controllers.  Your shoulders and low back will thank you.