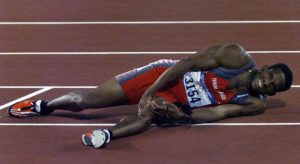 Original caption: Trinidad’s Ato Boldon holds his leg in pain after the 200m final at the Sydney Olympic Games, September 28, 2000. Greece’s Konstantinos Kenteris won the race in a time of 20.09, Campbell was second with 20.14, Boldon was third with 20.20. REUTERS/David Gray